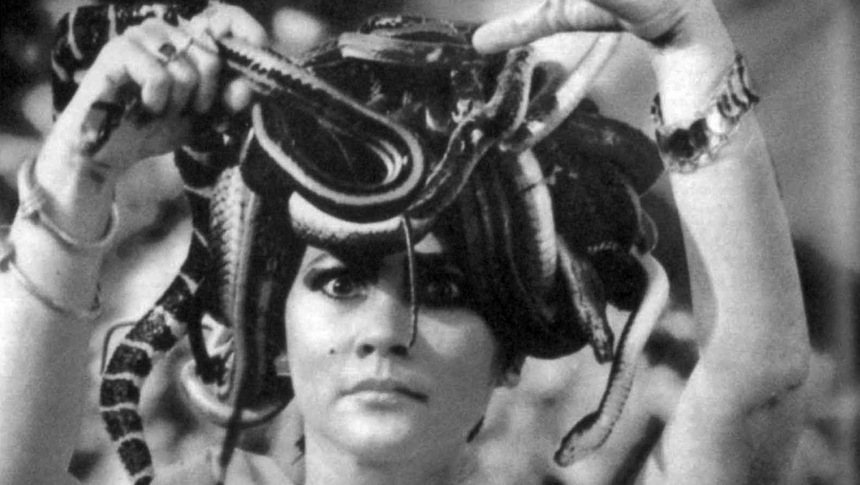 No, I did not make a mistake with the photo captions above. While I was catching up with some classic Indonesian horror movies, that shot in Sundel Bolong (1981) struck me as familiar. I'm a huge fan of Nakata Hideo's Ring (1998), enough to be struck by that single image of an eye peeking through long black hair.

Back in the 1970s and 1980s, Indonesian horror films were among the gold-standard scare flicks in South East Asia. And the most popular horror films at the time starred Suzzanna aka Suzanna, born Suzzanna Martha Frederika van Osch, Indonesia's ultimate Queen of Horror, a title that still stands unchallenged even today.

It's understandable why she is still the undisputed scare queen. She had a strong on-screen presence, and a face that could be hauntingly beautiful at one moment, and strikingly horrific the next. It might look kind of easy – just put on panda-eye make-up and powder the face white. But it still takes charisma to pull it off effectively, similar to how Bela Lugosi powered up those scary eyes in White Zombie (1932).

It also helped that a myth was built around her real-life persona. Because of her timeless beauty, she aged extremely well, leading some to speculate that she had engaged in mystical practices to keep herself looking young. And then there was her real-life drama. After she separated with husband Dicky Suprapto, she lived with another actor, Clift Sangra, who was rumoured to have hired a hitman to kill Suzzanna over an inheritance. What did really happen was that Sangra was sentenced to four months in prison for shooting Suzzanna's son-in-law with a gun. It's all kind of crazy and probably added more mystique to the actress's reputation.

But of course, what's more important is her body of work, which totals more than 40 films of various genres, but mostly of horror. She started out as an award-winning child actress before gaining global fame as one of Asia's most popular actresses in the 1970s.

Her 1972 film, Beranak Dalam Kubur (Birth in the Grave), in which she starred with husband Dicky Suprapto, is widely considered as her best, even though she never shows her face as the long-haired ghost in a flowing white gown. The film itself (adapted from a graphic novel; yes, the Indonesians were already doing it back then!) is grand Gothic horror, quite something out of the old Universal vaults coupled with Edgar Allan Poe's The Tell-Tale Heart. All the right ingredients are there – a big, old mansion; an evil step sister; death, murder and lust; a dead body in the scary basement; and even a hunchback.

Yet another film that cemented her reputation as the Queen of Horror, and the one most often remembered, is Sundel Bolong. The film also stars hunky Barry Prima, whose shirts often fall off in his movies. Suzzanna and Barry would go on to make more memorable films together.

Because Sundel Bolong was reportedly the first film to ever feature the sundel bolong, Suzzanna is forever associated with the cinematic depiction of the folkloric ghost, much like how in Malaysia, Maria Menado is often mentioned in the same breath with Pontianak (1957), Malaysia's first horror movie.

Coincidentally, "Maria Menado," the stage name, is derived from the fact that Maria was born in Manado, in the North Sulawesi province, to which Suzzanna's lineage also has a connection. Both actresses were queens of horror, both were exceptionally beautiful, and both were the first to portray folkloric female spirits on film. (Suzzanna passed away in 2008, while Maria Menado is 85 this year.)

And the sundel bolong and pontianak have a lot in common. Both are vengeful spirits of women who died while pregnant. (This folklore from the archipelago extends even to the Philippines and India, where the creature is known as tiyanak and churel.) The sundel bolong is the spirit of a prostitute killed while with child, and gave birth in the grave. She has long, black hair to hide the maggot-infested hole in her back through which her baby was born. (The sundel bolong is so well-known, Marvel's Blade even features it as an Asian sub-species of vampires.)

This hole in her back becomes a gag in Sundel Bolong, when she goes to a satay stall and orders 200 sticks of satay. The two proprietors watch her as she eats with lightning speed, and only realise what she is when they notice the pieces of meat falling out of the hole in her back and onto the ground. Here is another similarity with Pontianak, which also features a comedic scene with a satay seller, played by Wahid Satay. It made me wonder if director Sisworo Gautama Putra, with whom Suzzanna made most of her horror films, was inspired by Pontianak, or it was simply because of the similarities between Indonesian and Malaysian folklore.

The so-called "sequel", 1984's Telaga Angker, is incredibly campy. It has no connection to Sundel Bolong, except for the fact that Suzzanna once again plays the sundel bolong. But this time, the ghost has developed some superheroic abilities and other useful skills, such as shooting laser from her eyes to blow up a boat, driving an excavator (I kid you not!), and blowing fire out of her mouth like Godzilla. Remember that this was 1984, the year Hollywood released Ghostbusters. So, I guess effects like lasers and glowing electrical current were somewhat the trendy blue-plate special that every horror movie had to have.

There are many more horror films in Suzzanna's filmography that are defining moments in her long career, such as Nyi Blorong (1982) and Malam Satu Suro (1988), the "romantic horror film" that features the sundel bolong not as a malevolent creature but as the protagonist (with K.I.S.S.-type make-up!). And then, of course, there's Ratu Ilmu Hitam (Queen of Black Magic, 1981), the gore-fest that garnered multiple nominations at the 1982 Indonesian Film Festival, including Best Actress for Suzzanna.

And now, it brings us back to the two stills at the beginning of this post. Imagine, long before there was a Sadako, there was Suzzanna. And like Sadako, she also sported a long, white dress and long, black hair. But unlike Sadako's straight, flowy tresses, the sundel bolong's is done up Bonnie Tyler-style.

Yes, the long-haired ghost in a white dress has been around for as long as humankind has existed, but cinematically, the similarities are still astounding. Perhaps this is proof that our myths and legends are indeed the same the world over, and we all dream the same way.

Or perhaps, to stretch it a bit, Nakata is a fan of Indonesian horror!

Do you feel this content is inappropriate or infringes upon your rights? Click here to report it, or see our DMCA policy.
Barry PrimaBeranak Dalam KuburDicky SupraptoIndonesiaSundel BolongSuzannaSuzzannaTelaga Angker

I really love suzanna movie because this is real horror