Review: THE TICKET, Once I Was Blind, Now I Am a Jerk

Murmured words are shared between a man and woman in the intimate opening moments of Ido Fluk's character drama, accompanied by indistinct images in motion.

What emerges clearly is the man relating a tale about a lottery ticket and God, followed by the same man's sincere prayer to God. It's easy to imagine that the man finds comfort in the familiar, perhaps opt-repeated words.

In the morning, the man awakens and finds that he can see for the first time in his life.

A visit to a doctor reveals that a tumor that was pressing on the man's optic nerve since birth suddenly and unexpectedly moved, and now he can see. The kindly James (Dan Stevens) and his devoted wife Sam (Malin Akerman) are elated, though quietly, as is their way.

James marvels that he can now see their son Jonah (Skylar Gaertner), but the sight of a black eye on the boy alarms James. Sam, it seems, kept Jonah's true condition as a victim of school bullying under wraps, not wanting to burden James any further. James, however, views her conduct as an affront, and soon he is ridding their household of braille labels and anything else that provided assistance to him as a blind man.

Beyond those things, his attitude toward life and his own behavior begin to change dramatically. No longer held back by his disability, he feels emboldened at the real estate company where he has lackadaisically labored as a telephone salesperson for years and quickly gains a promotion. 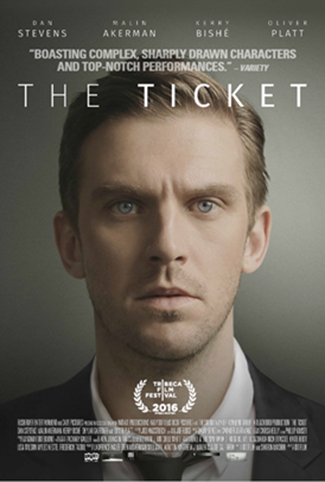 He starts making decisions on his own, without consulting his wife, and begins making eyes at an attractive coworker named Jessica (Kerry Bishé). His only friend Bob (Oliver Platt), a blind coworker, notices and talks to James about it, and the friction between them grows.

To be blunt, James becomes a jerk.

Was he always a jerk? The original screenplay by Ido Fluk and Sharon Mashihi only hints at James' younger years, though the initial portrait of him is kind and gentle. It suggests instead that James has always harbored anger and resentment about his blindness, but kept it tamped down with civility, more out of necessity than anything else.

He unleashes all his past unhappiness as fuel and justification for becoming more aggressive at work and at home, perhaps exposing for the first time the emotional gap that exists between himself and Sam.

While the screenplay increasingly feels manipulative and cruel-spirited, Ido Fluk's direction is spare and spot-on. Scenes are allowed to build up and play out in a very natural manner, which contributes to the undercurrent of unease in the picture.

Stevens ably conveys his character's enormous range of emotions. James may not ultimately prove to be a sympathetic or even likable person, but who's to say how anyone might respond in his situation?

True, the movie is judgmental to a large extent and, as delicately as it's filmed, its morality is slammed home like a sledgehammer. Even so, it's a thoughtful, if sometimes queasy, experience.

The film opens in limited release on Friday, April 7, via Shout! Factory. It will also be available to watch on various Video On Demand platforms.

Do you feel this content is inappropriate or infringes upon your rights? Click here to report it, or see our DMCA policy.
Dan StevensIdo FlukKerry BishéMalin AkermanOliver Platt