Review: FEUD: BETTE AND JOAN, A Tale of Melancholy 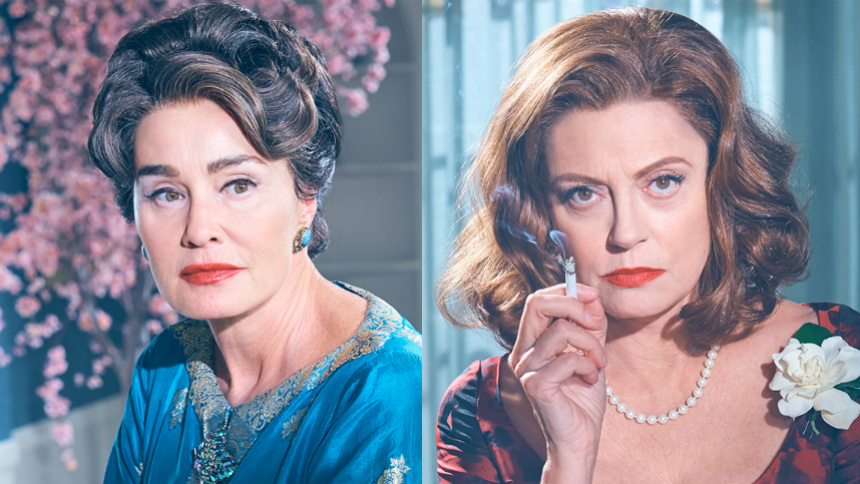 A cloud of melancholy hangs over the eight episodes that comprise Feud: Bette and Joan, a limited series that has completed its run on U.S. cable network FX.

Nostalgia creeps in at the edges and occasionally threatens to overwhelm the players in a series that focuses initially on the making of What Ever Happened to Baby Jane? Much of the early fascination for me came in watching the recreations of scenes from the movie, and then pulling back to show the interactions between Bette Davis (Susan Sarandon), Joan Crawford (Jessica Lange) and director Robert Aldrich (Alfred Molina), on and off the set.

The series, created by Ryan Murphy, Jaffe Cohen and Michael Zam, had much greater ambitions than simply recreating scenes, however, and as the episodes played out, it provided a sense of the tremendous disadvantage that women faced in Hollywood.

What is perhaps most dismaying, though, is that women in Hollywood still face a huge disadvantage, simply by virtue of being women. The studio system in Hollywood is still rigged for white men to succeed, a byproduct of nepotism that made it difficult for anyone to get a job unless they were related to somebody already working in the industry. Those who were able to land jobs without the helping hand of nepotism were the scrabblers, the fighters, the opportunists, the liars, the cheats.

During the 1950s, actors began to break free of onerous, multi-year contracts, thanks to Bette Davis' fight against indentured servitude, dating back to 1937. The Hollywood studio system was struggling to survive the changing tastes of audiences. Alfred Hitchcock's rule-breaking Psycho was a shocking success in 1960, and the studios wanted to duplicate that success, as Hollywood has always done.

With that groundwork laid, Feud: Bette and Joan establishes Davis and Crawford as forces of nature, each combative in their fight to do creative work that would satisfy their own individual standards. Crawford recognized that the source material was rich with possibilities, and also realized that a star of similar stature was needed. She pushed to get the project made.

Davis, seemingly obsessed with quality, agrees to make the movie, but it's not long before their personalities clash, reluctantly goaded by Aldrich, who is himself goaded by studio boss Jack Warner (Stanley Tucci). Aldrich may have been compelled to act against his instincts by going along with Warner's demands, but his financial stake in the picture -- and the sexism of the era -- evidently made it easier for him to accede.

Aldrich may not like being pushed or demeaned by Warner, but his own actions show that he was every bit as guilty of demeaning others, including his wife and his longtime assistant, Pauline Jameson (Alison Wright). After the movie concludes, most of an entire episode was devoted to Jameson's efforts to direct her own original screenplay, and how she was stymied by Aldrich and Crawford.

Again, another example of 1960s sexism that has not changed as much as it should have in the past 50 years. Still today, it's more difficult for women and people of color to get their feet in the door than it is for the white son of someone famous to get multiple opportunities to fail.

What kept bleeding through the episodes, though, was the melancholy. Davis and Crawford gave everything of themselves to feed the voracious entertainment beast that is Hollywood and, in the end, were still not satisfied, still wanted to achieve more, do more, act more. Whatever they did, it was never enough.

Do you feel this content is inappropriate or infringes upon your rights? Click here to report it, or see our DMCA policy.
Alfred MolinaBette DavisFXJessica LangeJoan CrawfordRyan MurphyStanley TucciSusan Sarandon