Now on Blu-ray: THE WISHMASTER COLLECTION Arrives From Vestron Video 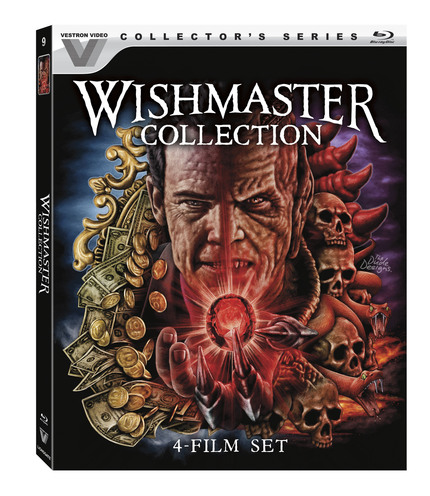 By 1997, the creature feature was all but dead in the horror world. Films like From Beyond, The Fly, The Beast Within, and dozens of others were very popular in the '80s and early '90s, but by the time Wes Craven upended the genre with Scream, people had already started getting cynical about horror and the lens had largely turned inward.

However, the idea of the gruesome monster laying waste to guilty and innocent alike wasn't completely dead, and in '97 the Djinn was born. Wishmaster was written by Peter Atkins, best known for his work on the Hellraiser series, and directed by FX wizard Robert Kurtzman, then a part of the legendary KNB EFX Group with Greg Nicotero and Howard Berger. Kurtzman had years of FX experience and wanted to make a throwback film to the kind of thing he'd worked on in the '80s.

The result is a not too shabby piece of gruesome gore that was a hit with horror fans from the start. The Djinn, an ancient demon that is the more maleficent germ from which the modern genie fable derives. Andrew Divoff portrays the villain in the first two films, and his performances are pretty solid. For parts three and four he was replaced - easy to do because the Djinn character lives largely under several pounds of prosthetics - by John Novak, and the films are poorer for his absense. In fact, the only real gem of the series is the first, but we'll get to that momentarily.

In Wishmaster, the Djinn is awoken when the fire opal in which he was trapped is discovered by archaeologists when a crane drops a crate while unloading a ship. Alexandra (Tammy Lauren) discovers that the Djinn is attempting to trick her into making three wishes, which will allow him to open the gate between worlds and unleash the wrath of his Djinn brethren on the world. She figures out his game and tries to hide. In the meantime, the Djinn grants wishes of anyone who gets in his way, and they never turn out exactly the way the wisher wants them to.

Wishmaster is a slight but fun little monster movie. A cross between the supernatural slashers like Friday the 13th and A Nightmare on Elm Street series, the film attempts to capture some of the magic of those films and manages to land somwhere in the middle in terms of quality. Divoff has charisma and a particular timbre to his voice that gives the audience chills and certainly takes the film a level or two beyond what it could be with lesser performers - more on that later - and he's not alone. Kurtzman's many years in the FX business meant that he was able to secure a lot of horror vets to play small roles in the film. While it was clear that the film is trying to launch Divoff, they threw in cameos from Tony Todd (Candyman) and Kane Hodder (Friday the 13th), and a legitimate supporting role for Robert Englund (A Nightmare on Elm Street).

The film is good fun with a lot of really great practical effects to satisfy horror junkies. There are a few CG gags that a more than a little cringeworthy twenty years later, but overall it's a solid effort. Wishmaster was Kurtzman's second film in the director's chair and remains the biggest success of his career in that position. He decided to move on when sequel talk began to pop up, and judging by the rapidly decreasing quality of the films, I think he made the right choice.

Vestron Video's release of Wishmaster is accompanied by all three sequels, so I'm obliged to write about them. However, I'll try to make it brief so that you don't have to suffer like I did.

Wishmaster 2: Evil Never Dies - In this film the Djinn goes to prison which results in a lot of cringeworthy casual racism. They decided to change the rules and now he must gather 1,001 souls to unleash the apocalypse. Still marginally fun, but the quality has dropped notably.

Wishmaster 3: Beyond the Gates of Hell - Divoff is now gone and the new Djinn (John Novak) shows up on a college campus to wreak havok on the coeds. The film features AJ Cook (Criminal MInds) who was making the rounds of horror sequels at the time. A strange late addition to the film is the Archangel Gabriel who tries to kill everything. Not Good.

Wishmaster: The Prophecy Fulfilled - You'd think that they would've learned their lesson, but no, part four is a real stinker. Novak is back as the Djinn, but this time the mask looks really wrong. He looks like one of those alternative kids who gauged his ears in the late '90s but then needed to get a real job, so he just lets his flesh loops dangle. It's really distracting. Anyway, the movie is bad and you can tell that the budget is non-existent. Avoid.

Vestron Video did what they could with these films, and they look surprisingly adequate considering the budget constraints that birthed them. The first film, being the oldest, leaves the most to be desired, but even it looks solid. Quality improves as the series gets younger and tragically the last two stinkers look the best. Isn't that always the way?

The series comes on three Blu-ray discs, one each for the first two parts, and a third disc holds the final two films. All of the films feature commentaries from directors and actors and all are enlightening. While the first film is easily the best of the bunch, the commentaries from the poorer films are actually more entertaining. I think part of them realizes that the films aren't traditionally good and that allows them to have fun with it, but part of the joy from listening was that often they seemed unaware of how goofy or sometimes downright bad certain moments are.

Apart from the commentaries, Vestron Video also provides a few contemporary featurettes for the first film including interviews with Kurtzman, Atkins, and much of the cast and crew that help to contextualize the film. The first disc is easily the most packed with bonus content. There are separate interviews going over the writing, behind-the-scenes on the FX, and even a set of interviews with the cameoed co-stars Jason, Freddy, and the Candyman. It's a great disc with a lot going for it. The other discs retain the commentaries, but there are only a few mentions of the FX and some vintage featurettes that would've been made contemporaneously for the DVD release since the last two went straight to video.

Bottom line: The first Wishmaster is a lot of gory fun, the rest are sporadically gory, and even more sporadically fun. I wish the first film was available separately with these bonus materials, but if you're a fan, you'll want the set.

Do you feel this content is inappropriate or infringes upon your rights? Click here to report it, or see our DMCA policy.
andrew divoffrobert kurtzmanvestron videowishmaster