INTERVIEW: Actress/Creator Suzanne Schmidt Delivers an Empowering Laugh with HEY YOU, IT’S ME 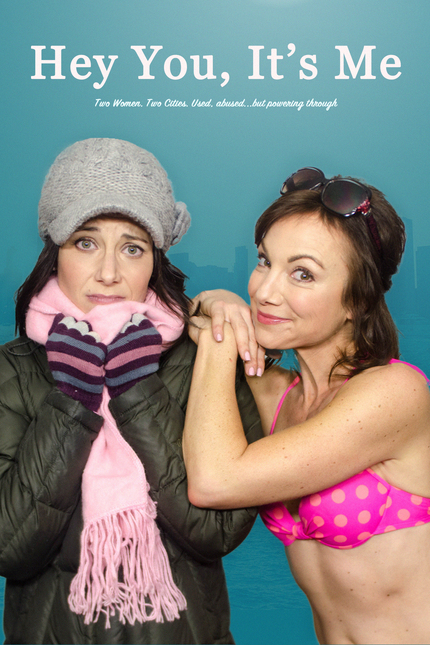 Can you feel it? There seems to be a rise in female artists creating projects that tell stories about interesting women these days. Of course, Hollywood has traditionally been reluctant to produce these lady tales, tossing the scripts into the ‘chick-flick’ abyss. Well, move over boys, because this exactly where the indie creators have risen to the challenge.

Now, I’m not sure if audiences have developed their recent taste for women-power from Shonda Rhimes’ uber-ladies or if was the pink knitted hats, but something is definitely different. Women make up more than half the population, so it’s about time we see their stories – which don’t involve a cat-fight or man to the rescue.

One such project is the new comedy web series “Hey You, It’s Me” from actress/creator Suzanne Schmidt which recently launched on Seed&Spark.

"Hey You, It's Me" delivers a humorous look at the power of a supportive female friendship – even if it’s via voicemail. The 6-episode series chronicles when two busy women, living in two different cities are determined to support one another unconditionally across the miles. Their voicemail relationship takes them through career obstacles, tough choices and the unpredictable dating scene, all while pursuing their goals in business and life.

“Hey You, It’s Me” first gained momentum when Suzanne launched the pilot episode on the festival circuit. It earned nominations at 12 different festivals, winning ‘Best Short’ at The Monthly Film Festival (TMFF) and ‘Best Webisode’ at Yes! Let's Make a Movie.

SUZANNE SCHMIDT: Bottom line, the lack of female stories being told directly translates to a shortage of acting work for women in Hollywood. After completing my MFA program in 2013, I realized it was time for me take a more active role towards change and create something of my own. I never thought I wanted to write because I get such fulfillment from bringing the characters of history’s great writers to life, but I’ve learned there is joy to be found in so many forms of storytelling.

Is the series auto-biographical or an exaggeration?

SS: Both. The friendship held together with voicemails is based on a real friendship. The theme of the female-specific struggle to thrive in the entertainment industry is auto-biographical. As for the specific storylines, when I hear about or experience something odd, I refer to my improv training and I ask myself, “what’s funny about that?” and “if that’s true, what else could be true?” Often the leap from what actually happened to “no way!” is not all that far.

What do you hope fans will gain from watching a strong female friendship?

SS: I have three nieces. The eldest is 6. What’s happening in the world affects me on a different level since they came around. I want them to grow up never questioning their worth or doubting their capabilities. I want them to always feel empowered. I hope this show makes some woman out there feel empowered. I hope it makes some woman realize how special her own female friendship is. I hope it makes a handful of women want to kick some ass. Because, why not?

One of the funniest moments was the recording studio scene – was that scripted or improvised?

SS: That scene was scripted and I had a blast writing it. However, because Frankie, who directed that episode, encouraged us to play so much, about 10% of what made the final cut is improvised, and there was a lot more footage where that came from! We had so much fun that day.

Biggest piece of advice you wish you would have followed in making this series?

SS: I’m not sure what advice I wish I had followed but I know one “rule” I’m glad I didn’t follow…”keep the episodes between 3 and 5 minutes.” I prefer longer content. I know the YouTube generation has a reportedly short attention span, but I hope our audience will enjoy the extra storytelling. We trimmed as much “fat” as I was willing to trim without compromising the story and our episodes are between 7-9 minutes. I’m very happy with that.

SS: Honestly I received so much valuable advice during this process that it’s hard to choose the “best.” I’ve been continually amazed by the incredible people I’ve met in this town and their willingness to help. One game-changing moment, however, was when my friend and fellow cast member, Scott Freeburg, helped me realize that shooting the pilot first would be wise. We learned so much during that shoot, and during the editing process we really discovered who we are as show. When we went into production for the rest of the season, I had a much clearer vision of what I wanted.

Did you ever think about giving up on the project and what stopped you?

SS: No. I was occasionally frustrated that I couldn’t afford to have my team with me the whole time. A lot of the producing aspect was lonely and tedious. But, I never thought I wouldn’t get it done and I never wanted to give up. I just wanted there to be 10 of me. And it would have been helpful if at least 9 of those versions knew a lot more than I do!

Lastly…where do you go from here?

SS: I’ll keep going with what I’m doing. Keep creating. I’m excited to get season 2 into development and just began another writing endeavor. There’s an acting project pending and I continue to seek work that excites me. I also plan to step back into the voice over booth this summer for some audiobook narration. Luckily I enjoy many different aspect of creating so there is always something to dig into!