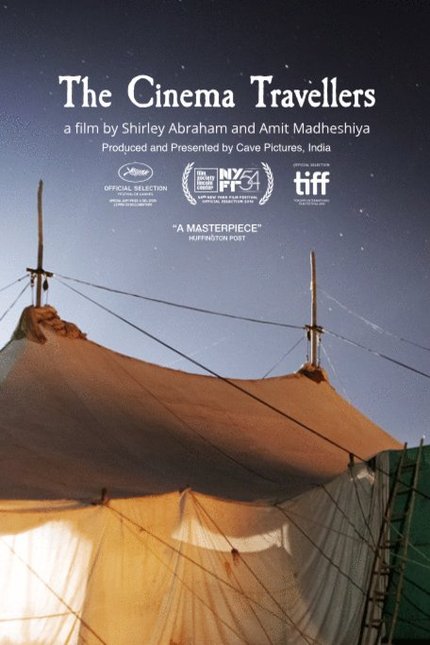 Shirley Abraham and Amit Madheshiya's The Cinema Travellers is a love letter to an age quickly coming to a close in India and around the world. Once upon a time in India, the only way that the small remote villages would be able to see a movie on a big screen was when the travelling carnivals brought along their portable cinemas run out of the back of a truck. These travellers brought magic to the small towns and villages of rural India in which building a full time cinema hall would be unsustainable. The Cinema Travellers follows a couple of these old-timey purveyors of celluloid magic on what could be their last journeys through the Indian countryside as the world and time conspire against them.

In these modern times, when 35mm film projection is becoming a boutique passion, it's hard to imagine a place where 35mm is all that still exists. In the backs of these trucks, ancient film projectors, most falling apart at the seams or rusting over, still bring joy to the locals of these town ill-served by the economic progress of a rapidly expanding India. Just as with people, when these machines age they tend to need more maintenance and replacement parts, and with 35mm being increasingly cast aside in favor of faster, more portable digital projection, the parts and repair are becoming harder to come by. It's a race against progress for these cinema travellers, and progress is winning.

This film begins as a love letter to the analog machines that bring the reels to life, a subject that will certainly appeal to the new breed of 35mm enthusiasts who insist that, like vinyl records, there is no substitute for the old way. However, after a while, it becomes clear that The Cinema Travellers isn't a film about a process, it isn't a film about a machine, it's a film about the joy and love that those machines bring. Sure, there is a tradition of 35mm travelling cinemas, but just because time renders the mechanisms warped and broken, doesn't mean that the same joy can't be brought through other means.

Case in point, at one point the film stops to spend some time with one of the few remaining artisans to work on 35mm film projections. He talks about his fifty years of service to cinemas, about the old days when he would have projectors stacked so thick in his tiny workspace that he barely hard space to walk. He talks about his love for the machines that make the pictures come to life. After years of looking after and repairing these fickle machines, he's even designed what he believes to be the perfect film projector, and he's just waiting for the day that some industrious spirit buys it and shows the world that he fixed every problem he ever found. But in the end, there he sits, alone in his workshop, waiting for customers who visit less and less frequently.

The future waits for no one.

Even as these showmen drag their monstrously cumbersome portable cinema halls from town to town, vying for an ever-shrinking piece of the pie now that the internet and cable TV have reached even the smallest of backwoods in this nation of over a billion people, they never lose their own hope and their own satisfaction in bringing the people an communal experience that beats any TV show. The Cinema Travellers soldier on, the tools of the trade finally evolve, but the trade remains the same. Will they become completely obselete at some point? Perhaps, but for right now, the need for these pilgrims is written on the faces of the girls and boys of all ages as they bathe in the light of the cinema screen while their heroes do the things they themselves cannot. The Cinema Travellers may be in the business to make a buck, but the joy they bring will last a lot longer than the dollar they earn for bringing it.

This documentary may focus on the men behind the curtain, but it's those of us who bask in the glow of that shiny screen who feel the power of what they do. The Cinema Travellers is an ode to a trade in danger of dying, and a prayer to the gods that the future will always have them in it. The Cinema Travellers is a glorious document of a transition, a movement from the death of one method to the birth of another, and with that birth the cycle can continue, thank heavens.

More about The Cinema Travellers