Blu-ray Review: TALES FROM THE HOOD, Still Relevant as Hell 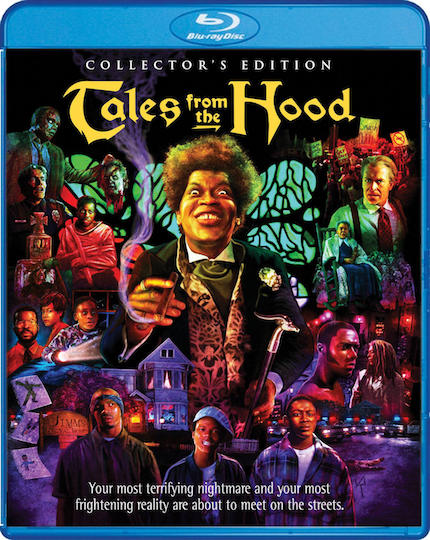 As a teen in the '90s, I rented every possible VHS horror tape I could find from both my local mom-and-pop store and the two area Blockbuster Video stores, none of which exist anymore, sadly. One of the many releases I brought home was Tales From The Hood, packaged as an "inner city" version of Tales From The Crypt.

The stories were different, but no less effective. The mid-nineties were the last time I saw the film --- until now. The monstrous maestros over at Scream Factory have acquired the rights to the title for a brand-new DVD and Blu-ray release, which officially hits the streets on April 18.

Re-watching the film, it's almost shocking to see how little has changed in our society here in America: the cops are still the bad guys in many circles (for good cause); the drugs still ravage communities; racism in our political leaders (as elsewhere) is still hideously present; and domestic violence shows no sign of going away.

The four vignettes showcasing the above themes are woven together with adept fluidity and direction by Rusty Cundieff, aided by (one of the producers) Spike Lee. In the wrap-around story, Clarence Williams III does his absolute best as the mortician seemingly channeling previous horror hosts and actors, such as Vincent Price, and Williams is a joy to watch --- particularly when he hams it up, which is pretty much a constant. Williams plays Mr. Simms, who it seems, has lured three drug dealers and gang bangers to his funeral home with the promise of "the shit," a huge load of drugs.

Mr. Simms tells them stories of the deceased as they tour the bodies --- and basement --- of the funeral parlor. He's quite animated, as I noted, and the the tales within resemble old EC fables in which the morally corrupt get quite the comeuppance. Stories like these are always a welcome addition to my "video library," a term that was in use way back when films like Tales From The Hood came out on VHS for home purchase.

A mad scientist named Dr. Cushing (yes!) played by the excellent Rosalind Cash --- probably THE ONE FEMALE mad scientist I've ever seen --- attempts to rehabilitate a criminal within a very A Clockwork Orange-type program. An abuser of his wife and child, played by a very non-funny David Alan Grier gets what he deserves. A trio of white cops who murder a prosecutor are avenged by the dead man with assistance from the one black cop on the scene that night in what feels very Candyman. A Southern white politician by the first name Duke decides to live in a house where the spirits of dead slaves trapped in dolls reside, with disastrous results. Lastly, the wrap-around film introduces the drug dealers to a new kind of Hell, the kind not on Earth.

Again, not having seen the film in decades, I was struck by how topical Tales From The Hood still is. Not only is that the sign of a fantastic work of art, but a true, sad reflection on the society we live in. If you love these old-school types of anthologies where the real bad guys get theirs in frightening ways, you'll want to add Tales From The Hood to your collection ASAP.

As for the Blu-ray release, Scream Factory has once again delivered the goods. The film looks and sounds amazing, and maybe I was so wrapped up in the stories that I didn't notice any imperfections... or perhaps there actually aren't any. It was interesting to see those involved with the film speak about it in the new featurette, as well as the vintage one. This release is highly recommended.

Check out more details on the Scream Factory release of Tales From The Hood here and watch the trailer below.

Do you feel this content is inappropriate or infringes upon your rights? Click here to report it, or see our DMCA policy.
Rusty Cundieffscream factorySpike LeeTales From the Hood