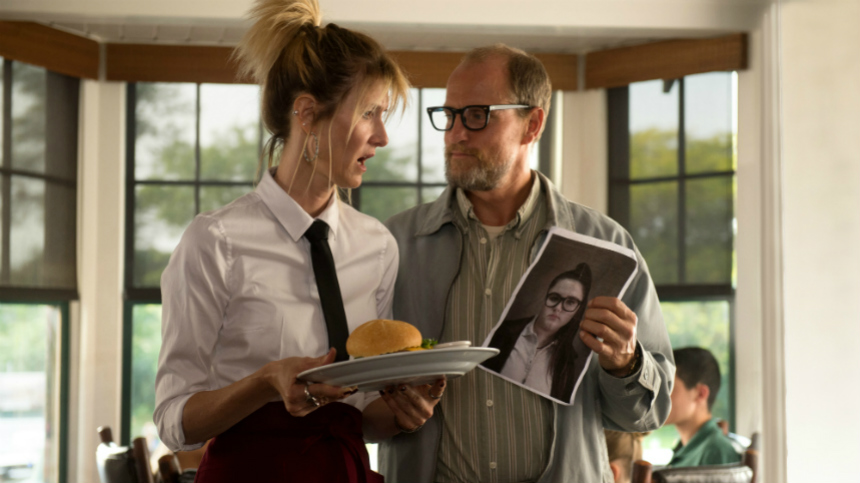 Ever since Wilson’s father passed away, he’s been feeling more lost than usual. The strangers he attempts to befriend, scene after scene, are no consolation as most people are suspicious of talkative types who behave too friendly too quickly. It’s easy to confuse an over-sharer, inept at picking up social cues, with a patient of mental illness, and yet for all the conversational rejection Wilson endures, he optimistically presses on, oblivious to any sense of character flaw.

The hilarious character, conceived by graphic-novelist Daniel Clowes, came from a very dark place. During the unfathomably dark occasion of his own father’s slow passing, Clowes found himself drawing to escape the pain.

At the Sundance premiere of his novel’s adaptation, which he also penned, Clowes confided that during the final week of his father’s life, after one day sketching a portrait of his father in unspeakable decay, Clowes discovered that he was madly cackling at his own artistic rendering. In the days after the dreaded event, Clowes took a step back, dropped all his current projects, and began focusing on far more pressing matters: his new book.

It’s fascinating to think of the graphic novel, Wilson, in this light; imagining Clowes imagining himself over-sharing his grief and turmoil over what’s become of his life now that the ravishes of time have made ashes of his past. With more than a little unkind exaggeration, we have Wilson, a single middle-aged lone wolf who never did get over the love of his life… a former crackwhore named Pippi.

Given the nature of the graphic novel - which sees Wilson in a new encounter on every page, usually beginning with a harmless conversational approach where Wilson spills his cynical guts out about the nature of some societal change or sad cultural practice or another to unsympathetic ears - going into the film, it will be more than a little curious to fans as to how the story will play out cinematically. Short answer: wonderfully.

The Skeleton Twins director, Craig Johnson, proves himself the man for the job of presenting Clowes’ screenplay in pitch perfect doses that play out not unlike the pages of the book. As a result, Wilson, the movie, has about 60 delightfully crusty characters, most of whom have no time for Wilson’s shit and go as quickly as they came. With the essential help of Woody Harrelson, who takes on the too-lonely protagonist with a heart of gold, we love Wilson despite, and often because of, his faults. You can call him many things, but you cannot call him a liar.

Wilson’s oft-unbearable earnestness is both how he earned the love of his ex-wife Pippi, played by the radiant Laura Dern, and also how he lost her 17 years ago. With the passing of his last surviving family member, an especially fragile Wilson sets out to claim his wayward what-if and get closure once and for all on the girl that betrayed his heart and aborted his child. Much to his surprise, his downward spiralling love not only turned around her crackwhore trajectory, but also birthed their child and enabled her adoption.

In the graphic novel, the bleak details of Wilson’s cruel world, romantic or otherwise, upstage each other in austerity, with each passing page, like an existentially absurd Book of Job. The reader laughs and cringes in equal parts, all the while being endeared to Wilson and his rants that are especially funny because they’re usually true. If you cared too much about the character, you might cry for him, but then you’d realize his strengths and the fact that he doesn’t even cry for himself, except, of course, for when he does.

The merciful beauty in Wilson, the film, is the love Clowes brings to the character, while still never flinching from the darker than dark stuff that is as much at its heart. For all his technological naysaying, Wilson has always put out a hopeful energy and, in exchange, life has paid him back in shit. But there’s a joy about Woody Harrelson that in his realization of the character, he can’t help but reward Wilson’s perplexingly enduring thirst for life with some positive juju.

The entire creative team, from Jon Brion to the impeccable cast to Clowes and Johnson, brings nothing but love to this film, to its comedy and its characters and its complex spirit, and the result is an ensemble work of blatant dedication that represents everything that was, and evidently still is, exciting about rich indie filmmaking.

Review originally published during the Sundance Film Festival in January 2017. The film will open in select theaters on Friday, March 24. Visit the official site for more information.

Do you feel this content is inappropriate or infringes upon your rights? Click here to report it, or see our DMCA policy.
Craig JohnsonDaniel ClowesLaura DernWoody Harrelson