Review: THE BELKO EXPERIMENT, Bloody, Brutal Terror in the Office 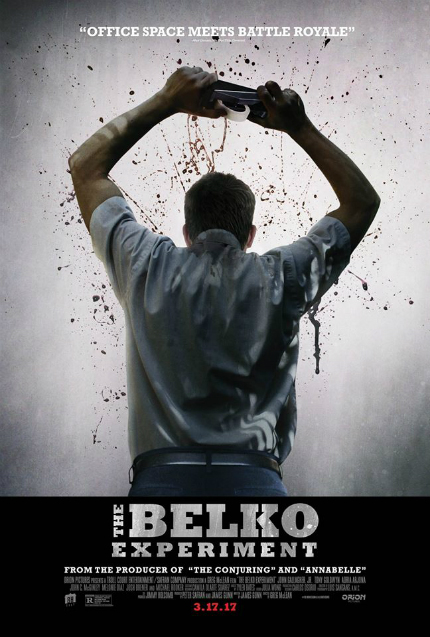 Ferocious, brutal and audacious, The Belko Experiment is also empathetic and funny. It starts the blood pumping from the first frame, then jacks it up with brains, brawn and recognizable humanity.

In Bogota, Colombia, employees report for a normal day of work at Belko, a non-profit corporation located in a lonely high-rise building overlooking the city. But something is not quite right, as noted immediately by executive-type Barry Norris (Tony Goldwyn); he is questioned by new, heavily-armored security guards at the parking lot gate, and he wonders why some employees are being turned away and sent home.

In the human resources office, new employee Dany Wilkins (Melonie Diaz) is welcomed by Vince Agostino (Brent Sexton), who quickly runs down a checklist; Dany asks about one item, an I.D. pellet to be placed in her head. With a smile, Vince assures her it's for the safety of the employees; since so many kidnappings take place in the city, it will help the corporation to find and recover her.

Elsewhere, the workplace has come alive as usual, until an unusual announcement is made over the loudspeakers, requesting the execution of several employees within a narrow time frame. Or else ...

Soon enough, the office building has been transformed into a battlefield and the employees have been enlisted in a war they cannot win unless they start killing each other. And that is only the beginning of the bloodbath to come.

James Gunn's script, as directed by Greg McLean and performed by an amazing cast, is a thing of awful beauty. Gunn says the trailer for the movie came to him in a dream one night, prompting him to blitz out the screenplay over the next two weeks. He had to get it out of his system, one imagines.

The finished product is a true nightmare, especially for those of us who have ever worked in a large corporate office, where the lines between management and labor are clearly defined by status and position. Here the management/oversight role is filled by those more willing to kill than others, led by Barry Norris and his lieutenant, Wendell Dukes (John C. McGinley). Barry, at first, is reassuring to the workers; he's the boss, and he's certain that the announcement is not authentic. Once things change, however, he makes a snap decision that is completely understandable ... to him, and to others who think like him.

He justifies it by virtue of his wife and children, but let's be honest: he's placing his own life above everyone else. The genius of the film, as made possible by Goldwyn's humane performance as Barry, is to ask, would you do any different? Barry is not a traditional villain; he doesn't revel in the violence. Yet he's been placed in an impossible situation and he's asked to do things that only a truly disturbed psyche might carry out.

On the other side of the argument, Mike Milch (John Gallagher Jr.) is a middle manager who's single, with no children, and in a relationship with fellow worker Leandra Flores (Adria Arjona). Early on, he recognizes the inherent, combustible danger; he's no idealist, but he refuses to buckle in, and so he becomes a perfect counterpoint to Barry.

The office divides up. A uniformly fine cast, including Michael Rooker (as a maintenance worker) and James Earl (as a security guard), delivers performances that are well-tuned to the horrors that are unleashed. Sean Gunn and Abraham Benrubi team up to offer a measure of badly-needed comic relief.

Director Greg McLean once again delivers a lean, efficient thriller that makes the most out of a limited setting. As Wolf Creek 2 showed, he's fully capable of capturing the bleak, dark humor of horrible situations. Unlike that movie's grueling, explicit violence, though, which made me feel queasy, The Belko Experiment is so over-the-top in the volume of its violence that I began distancing myself early. That, in itself, may be a commentary on our increasingly nightmarish world, or a reflection on my own lack of empathy for fictional others.

Whatever your personal conclusion may be, The Belko Experiment left me feeling devastated at the end, haunted by the pure anguish that pours out of the screen.

The film opens in theaters throughout North America on Friday, March 17. Check local listings for showtimes.

Do you feel this content is inappropriate or infringes upon your rights? Click here to report it, or see our DMCA policy.
Greg McLeanJames GunnJohn Gallagher Jr.John McGinleyMichael RookerTony Goldwyn

More about The Belko Experiment