Review: ANGAMALY DIARIES, An Unexpected Assemblage Of Collateral Chaos (In a Good Way) 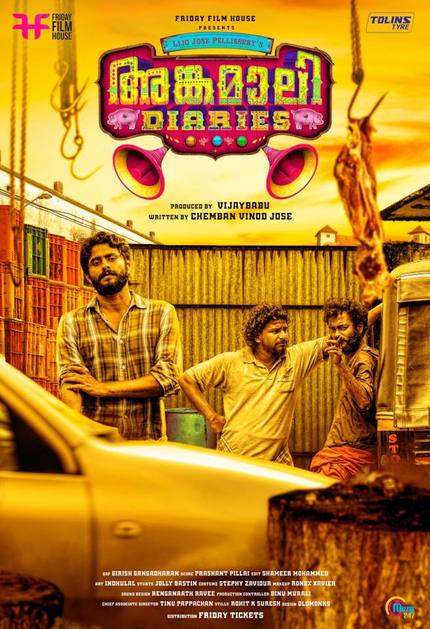 There is no doubt that Indian cinema treads a lot of familiar ground year after year. The romantic musicals, the gangster epics, the over the top action blockbusters, the broad comedies, they all have a place on the revolving slate of film ideas at almost every major Indian studio. The trick in making this kind of thematic monotony palatable, and even exciting in many cases, is the execution. While many filmmakers and producers are perfectly happy to stay within the confines of the kind of films that find easy box office success, it's the outside-the-box thinkers and craftsmen and women who are able to create exciting new experiences in familiar places.

Out of India's dozens of regional film industries, most with different languages and cultures, one of the most progressive and boundary pushing of them all is the Malayalam language cinema of Kerala. Over the last decade or more, Malayalam cinema has pushed out some incredible talent into the world. From contemplative filmmakers like Adoor Gopalakrishnan who are incredibly well respected on the world stage, to the more recent arrivals of directors like Rajeev Ravi (Kammatipaadam, and DP on Anurag Kashyap's Dev D and Gangs of Wasseypur) and the upstart success of Sanal Kumar Sasidharan (director of Rotterdam Tiger winning film, Sexy Durga).

Another name we can add to that list is Lijo Jose Pellissery, whose new film Angamaly Diaries, is a fascinating spin on the small-time gangster genre that has produced some of India's most acclaimed international successes.  Careful Screen Anarchy readers might be familiar with Pellissery's name from his inclusion in my list of 2015 favorites for his previous film, Double Barrel.

That film grabbed my attention from the outset with its blatant disregard for traditional narrative form and an overabundance of kinetic, neon-tinted style. It was quite an experience, and with its massive cast and numerous interwoven storylines, a bit of a challenge to get a handle but, but that's part of what made it so exciting. Angamaly Diaries sees Pellissery returning to the real world from Double Barrel's out-there occult fantasy realm without losing his sense of adventure, and the result is one killer film.

Not unlike last year's major critical and box office hit, Kammatipaadam, Angamaly Diaries focuses on the lives of a few men in the titular township and their desire to make something of themselves. That is pretty much where the similarities end, though, and Angamaly Diaries takes that basic idea and cranks it up to eleven, leaving the viewer dazed from time to time, but never wanting for action. The film features a host of new faces on the Malayalam film scene, which helps to preserve the notion that Angamaly Diaries is primarily focused on the telling of the story and even more so, the methods to their madness.

Antony Varghese plays Vincent Pepe, a small-time hood who grew up idolizing a group of local rowdies (gangsters or hoodlums). When it comes times for Pepe to take his piece of the pie, he finds success in the most profitable business Angamaly has to offer, the pork trade. Forced to cut a bargain with an old nemesis in order to get the ball rolling, Pepe finds himself embroiled in a complex world of minor villains, each with their own axe to grind. A complicated web of revenge and retribution swirls like a hurricane all around him, and Pepe spends his life trying to get above it all.

One thing that is quite disconcerting about Angamaly Diaries at first is the overwhelming number of characters. Dozens of named hoodlums flood the screen, which makes finding a focus a bit of a challenge at first, but pretty quickly the film settles on the relationship between Pepe's "team", and a pair of unusually assertive pork magnates, brothers Ravi and Rajan.

The trio first come into close contact when the R Brothers take out a close associate of Pepe's for horning in on their turf, but when they come out of prison, they've learned to calm themselves a bit when it suits their desires. However, just because Pepe, Rajan, and Ravi can do business with each other by understanding the bigger picture, doesn't mean that everyone around them is quite as forgiving. In fact, as calm, cool, and collected as the three men can be when it comes to discussing business, it just goes to show that no one is impervious to the kind of mayhem that can be brought on by a loose cannon.

When I was a teenager just getting my driver's license and my father hesitated to let me drive anywhere I wanted at any time, he told me that it wasn't because of me or my skills, it was everyone else on the road he was worried about. Such is the life of Vincent Pepe. The road to a miniature crime empire is certainly fraught with danger, but Pepe manages each speed bump with the kind of grace that wins friends and earns the respect of enemies. Unfortunately for him, almost everyone around him is a complete asshole who can't keep his shit together, and Pepe pays the price.

Angamaly Diaries uses close quarters brawls like most Indian films use songs, to punctuate a moment; but in this film, they do more than that, they help to shape the film's structure and main thematic ideas. About twenty minutes into the film, when Pepe is getting ready to bust his street fight cheery, Pellissery interjects with a running monologue from Pepe's old mentor describing how to get the drop on an opponent in a fight.

The idea, according to the late Babu Ji, was that when you are getting ready to throw down, you don't punch the guy you're arguing with, you punch the right next to him. As your enemy scrambles to understand what's going on, you get the drop on them and take the advantage. Well, it seems that the world was listening to Babu Ji, and Pepe's life is a perpetual example of his advice. Even as Pepe does the right thing - or at least as right as one can muster in the down and dirty world of pork vendors - it's the peripheral characters that continue to plague him and start a million little fires that threaten to burn his house down. It's an ingenious technique that keeps the audience on its toes throughout the occasionally taxing two and a half hour run time.

The fights continue throughout the film, each with its own style and exhilaratingly chaotic energy. Bodies collide and confuse, the true nature of violence and chaos illustrated by the frequent vivid festivals crowding the street and providing not only the lion's share of Pepe's business, but also the greatest opportunity for mayhem. Hundreds of characters collide in a seething mass of ecstatic bodies embroiled in religious and violent fervor over the pettiest of slights. Problems smoothed over by the gentleman's method of compromise and capitulation are resurrected in the fires of those for whom mere penance is not enough. It's a glorious, chaotic, mesmerizing, frustrating, and overwhelmingly kinetic sight.

At the center of the maelstrom stands Vincent Pepe, with dreams of becoming a big fish in his small world. Even as he and his girlfriend make plans to steal away to Europe while she goes to college, Pepe can't help being drawn into a madness largely of his own making. While Europe seems like a civilized escape from his daily grind, he fully understands that he would go from prince to pauper in an instant, and even though his kingdom is constantly under siege, better the enemy you know than a future full of doubts.

What looks like complete chaos from the outside turns out to be a well-structured story framed by violence, interspersed with moments of clarity. Even as the brass bands blare through one religious festival after another - much has been said about the film's appropriation of classic Tamil and Hindi films songs - and the pigs squeal for their lives, Pepe's life feels if not settled, at least somewhat predictable. He lives and breathes the chaos. However, somewhere underneath his veneer of control, he knows that he's as much at the mercy of the world around him as his pigs are at his own mercy.

Angamaly Diaries is one of those films that feels incohesive as you are watching it. Too many fights, too many characters, too much chaos, not enough structure. It isn't until you walk away from the cinema, filled with the flashing lights and blaring sounds of a Kerala in the throes of progress, that it all begins to come together. There is method in the madness, and Lijo Jose Pellissery has harnessed this beast of a story into one of the most exciting and thrilling films of the last few years. It's a touch too long, and there are a few too many romances for a film like this, but minor concerns aside, this is definitely a winner.

Fortune favors the bold, and they don't come much bolder than Pellissery. Whether it's painting a candy colored world of gods and gangsters in Double Barrel, or attempting to harness the disorder of underground pork vendors in a small town in Kerala, Pellissery is willing and excited to take chances. They don't always work, and they often lead to slightly messy and unrefined final product, but I'll be damned if they aren't exciting to watch and perhaps even more exciting to think about. Angamaly Diaries is a gem, I can't wait to see what Pellissery does next.

Do you feel this content is inappropriate or infringes upon your rights? Click here to report it, or see our DMCA policy.
antony vargheseindialijo jose pellissery

I was paid 104000 bucks last 12 months by doing a web based task while I was able to do it by w­orking in my own time f­o­r quite a few hours every day. I applied job opportunity I stumbled upon on-line and I am delighted that I was capable of to make such great money. It's undoubtedly newbie-friendly and therefore I am so pleased that I found out about it. Find out more about exactly what I do... http://adultadda.net/2Xj

I was paid 104000 dollars previous 12 months by doing a web based work and consequently I was able to do it by w­orking in my own time f­o­r several hours each day. I used job opportunity I came across online and so I am delighted that I was succeed to earn such decent earnings. It's undoubtedly newbie-friendly and I'm so pleased that I discovered out about it. Go and visit what I do... http://ipt.pw/PWXjXr

The best movie in Malayalam for a long time! The courage to make such a movie comes out of the mature audience in Kerala!