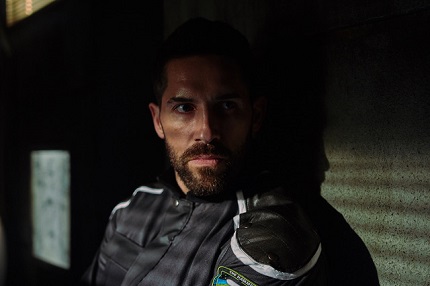 Production is underway in Serbia on the sci-fi action thriller Incoming. International action star Scott Adkins is part of the cast.
Incoming will be the directorial debut of Eric "Z" Zaragoza who has been an assistant director on a plethora of small budget films over the years. Ranging from family affair like Jurassic School (What do you mean it doesn't eat the children!?!?), sci-fi thrillers like Paradox and crime thrillers like The Last Heist. He even had a hand the awfully dumb but perverse slasher flick Jersey Shore Massacre. I have to tip my hat to that one for at least killing off a handful of guidos and guidettes. Credit is due.
XLrator Media is releasing the film in North America. Small budget productions are usually short and quick so expect this early in 2018. The full press release with a description of this space set thriller follows.

Scott Adkins (Doctor Strange, The Expendables 2) is set to star in the new sci-fi action thriller INCOMING from prolific indie producers Benattar/Thomas Productions. Production is underway in Belgrade, Serbia.
XLrator Media will distribute the film in North America. Foreign sales will be handled by Premiere Entertainment Group. The film is financed by the UK’s Sharp House.

INCOMING marks the feature directorial debut of longtime Benattar/Thomas collaborator Eric “Z” Zaragoza and is written by Jorge Saralegui, based on an original story by Rick Benattar, Nigel Thomas and Jorge Saralegui.

The International Space Station is now a prison — the ultimate black site. No one’s getting out.  And no one knows it’s there. But when the imprisoned terrorists take over the Station and turn it into a missile aimed at Moscow, only a shuttle pilot and a rookie doctor can stop them. Their task is complicated by a rogue CIA agent (Adkins) who has his own plans for the station and the terrorists within.
Producers are Rick Benattar and Nigel Thomas. Premiere’s Elias Axume also serves as producer as does Milos Dukelic of Belgrade production service company, Red Production. Executive producers are XLrator Media’s Barry Gordon and Michael Radiloff, and Sharp House’s Ian Sharp, Rebecca Joerin-Sharp and Emma Dutton.
Scott Adkins’ deal was negotiated by Joe Hutton of London’s BWH Agency and Brett Norensberg at Gersh.
“We’re thrilled to be working with Scott on this exciting new project. It’s a science fiction film but rooted in the realities of our world today. It explores familiar themes and looks at what could be our world in the not-too-distant future,” said producer Rick Benattar.
“We are excited to work with Scott Adkins again after our collaboration on CLOSE RANGE. He is one of the best action heroes and martial artists in the world today,” said XLrator Media CEO Barry Gordon.

Do you feel this content is inappropriate or infringes upon your rights? Click here to report it, or see our DMCA policy.
Eric ZaragozaIncomingSci-fiScott AdkinsThrillerXLrator Media

I'll watch it if Adkins is in it. Still stoked for Savage Dog!

CEO of Bing!, is helping visitors to get started in "Work at home" method, that Loads of marketers have been doing for about one year now. This year only, I generated about $36k already with nothing but my home computer as well as some spare time, although i have a fulltime 9 to 5 job. Even most people new at all to this, actually make $50/per h successfully and the income might be much higher as time passes... This is how i started >> http://ru.vu/qpBrw

Umm, Fortress 2, Lockout, Escape from DS-3, Dante 01... not an original idea, but may still be worth watching.

Crowdfund This: More From Phil Mucci's Professor Dario Brava, The Occult Activity Book (and Spirit Board!)