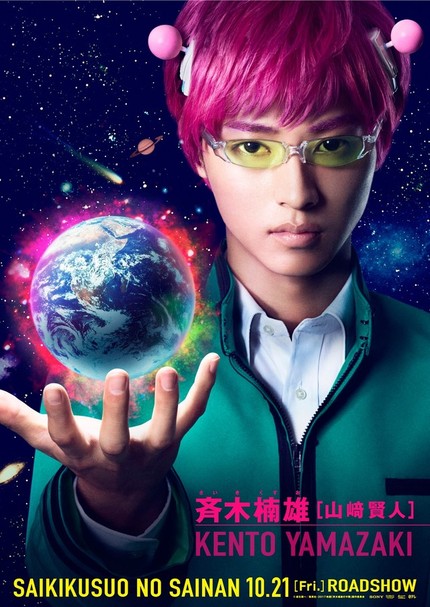 Japanese writer-director Fukuda Yuichi continues down his very prolific - and very goofy - road in 2017 with a pair of features and a television series all slated for release this year, all of which continue to display his love for quirky source material.

For the unfamiliar, Fukuda first came to international attention in 2013 with his feature film Kid's Police - a spot on recreation of hard boiled 1970's cop thriller starring young children that was spun off of his previous television series. Defying the silliness of the premise Kid's Police was actually a shockingly well made film with a great sense of fun and that combination has been typical of all of Fukuda's work. Later that year Fukuda also released HK: Forbidden Hero (aka Hentai Kamen) which would go on to storm the international genre festival circuit with its tale of a panty sniffing super hero and suddenly we realized that not only was Fukuda very goofy and quite good but also very, very prolific.

On the feature front in 2017 we get Yamazaki Kento starring in the live action adaptation of Aso Shuichi's popular gag manga The Disastrous Life Of Saiki K, as first published in Weekly Shonen Jump. The story follows a 16 year old high school student trying to live a normal life and hide his psychic powers despite the fact that he has, you know, brightly colored hair and antennae. Which makes fitting in a bit difficult. This is going to be a bold and colorful affair and with Sony behind it in Japan it appears to be a solid bump up from his normal budget levels. The first teaser has just arrived and while it doesn't show a ton at this stage you certainly get a sense of the overall look and feel. Check it out below!

Do you feel this content is inappropriate or infringes upon your rights? Click here to report it, or see our DMCA policy.
animehentai kamenlive actionmangashonen jumpThe Disastrous Life Of Saiki Ktraileryuichi fukuda