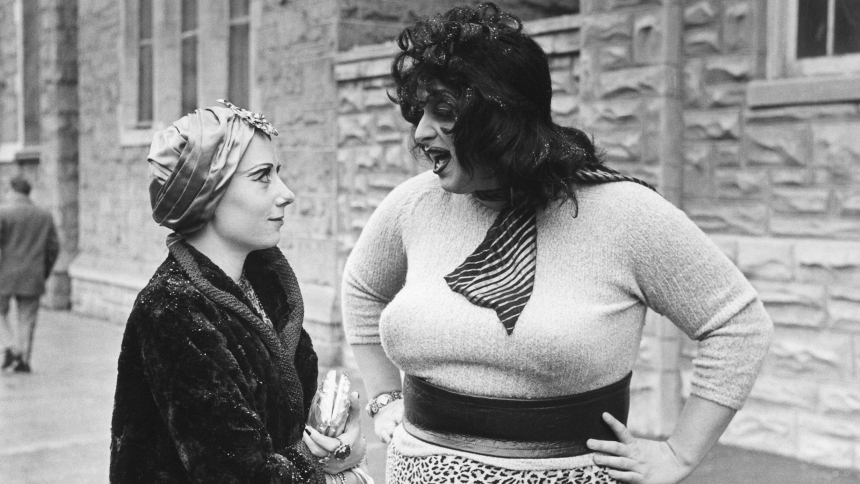 John Waters is the undisputed king of trash cinema. An absolutely unique voice who has no equal even fifty years after he first cranked up his camera and trained his warped eye on the dregs of society. Never one to back down from controversy, Waters' films are shocking, offensive, delightful, and wickedly fun even when they aren't entirely successful. His second feature, the gonzo parade of sin that is Multiple Maniacs, was recently rereleased to cinemas in a new 4K restoration and now finds a home on Criterion Blu-ray. If you'd told me this was going to happen after I first saw the film twenty years ago, I would've laughed in your face, but sometimes the world is a good place, and today is one of those days.

The Criterion Collection has been rumored to have control of his early catalog of shorts for at least a decade now. When I first started exploring Waters' films in earnest in the early-mid '90s, I'd heard rumblings of those films - Hag in a Black Leather Jacket, Eat Your Makeup, The Diane Linkletter Story - but the word was that Waters had locked the prints away in his closet, never to be seen again. A few years ago Waters decided that they were worth watching, and started screening them to limited audiences, but never anywhere near me.

As it stands, those films as well as his first feature, Mondo Trasho, live on in shitty bootlegs and myth for most of us, including myself. However, when I was 17 I found a VHS of Multiple Maniacs in a San Francisco video store and immediately snatched it off the shelf. I had already seen Pink Flamingos in its 25th anniversary theatrical rerelease, skipping school to drive from the Sacramento subrurbs to the hippie capital of the world to see it on the big screen at Berkeley's UC Theatre, and was completely blown away.

I had already seen his later, more accessible work like Cry Baby and Hairspray, but watching Pink Flamingos on a big screen in this majestic old movie house was a magical and formative moment in my youth. So imagine my excitement at discovering Multiple Maniacs on (what turned out to be a bootleg) VHS. The quality was dingy as hell, the image was muddled and the sound was shitty, but at the time I didn't care, what I watched changed me for the better. Movies could be anything, it was the cinematic equivalent of punk music, the democratization of art. Not only could anyone make a movie, anyone could make a masterpiece.

The story of Multiple Maniacs follows Lady Divine (Divine), the star attraction at the streetside freakshow known as the Cavalcade of Perversions. Lady Divine, appalled by the illicit romantic affairs of her lover played by the inimitable David Lochary, decides to take him out, but not before life throws her for a loop involving a vision of the Infant of Prague, a twenty minute gloriously blasphemous "rosary job" in the pew of the local catholic church, a sexual assualt by a fifteen foot lobster, and ultimately her demise at the hands of the national guard following a Godzilla stomp through the streets of Baltimore.

If that last sentence sounds like spoiler-city, relax, there is no amount of spoilers that could possibly ruin the experience of Multiple Maniacs. At once thrilling, confusing, intelligent, and delightfully & disgustingly prurient, the film is an absilutely unique experience without equal, even in Waters' own oeuvre. The stark black-and-white photography heightens the already apex campiness of the film and the director's stamp is all over this incredibly exercise in bad taste. It's trashy, amateurish, offensive, lurid, and I could not love it more.

The film looks amazing in its new 4K restoration, making me incredibly sad that I was unable to catch it upon its rerelease in cinemas from Janus. However, if you are like me in that regard, you'll be ecstatic with the Blu-ray, which looks glorious. The sound is equally great, though purists should be aware that some of the original music had to be replaced due to rights issues, though not having seen the original via boot in almost 15 years, I didn't miss it much. Frankly, if the new music is okay by John - and he says as much in the commentary - it's okay by me.

Speaking of John, he delivers a fantastically Watersesque commentary on the disc that is worth the price of admission. While he isn't interviewed on camera in the bonus materials, his commentary speaks volumes about not only the film's origins, but also nearly every on screen performer is accounted for by the director, which is impressive for a forty-five year old film. Water describes the age in which the film was made and how his goal wasn't any sort of overt political subversion, but rather the skewering of the boring lovey-dovey hippie shit that he was seeing around himself in the late '60s. It's a great listen, and any fans of John Waters know that he is an incredibly engaging figure, even in his off-the-cuff remarks, but this commentary is A+ material.

As if that weren't enough to sell you, Criterion also boasts two additional featurettes on the disc that are well worth your time. The first is a collection of interviews with most of the remaining primary cast and crew including Mink Stole, Vincent Peranio, Susan Lowe, George Figgs, and Pat Moran in which they describe the experience with a great deal of love. The other featurette is an academic reading of the film in the form of a visual essay by scholar Gary Needham, which is great if you can navigate his heavy accent. Last, but certainly not least, is a great essay on the film by Linda Yablonsky that serves as a great overview to the film covering both the production and cultural impact of Multiple Maniacs.

*** My only complaint, irritatingly repetitive as it may be, is that Criterion needs to invest in a goddamned stapler. These fold-out booklets are terrible.

Multiple Maniacs on Blu-ray is an essential release. Locked to Region A, BUY IT!

I was paid 104000 dollars last year by doing an online work furthermore I was able to do it by w­orking in my own time f­o­r quite a few hours during the day. I utilized work opportunity I came across on-line and therefore I am thrilled that I was in a position to earn such good money. It is actually newbie-friendly and I'm so blessed that I found out regarding it. Take a look at what I do... http://ipt.pw/NdYjx6

I was paid 104000 bucks previous year by doing an on-line job and consequently I was able to do it by w­orking in my own time f­o­r several hours on a daily basis. I applied work opportunity I came across on-line and so I am thrilled that I was capable of to make such decent earnings. It is seriously newbie-friendly and I'm so blessed that I discovered out regarding it. Look out for exactly what I do... http://s.id/1W1