"Beyond Godzilla: Alternative Futures and Fantasies in Japanese Cinema," a film series screening at Japan Society from March 24 through April 8, looks at the long history of Japanese tokusatsu eiga, or special effects films. On the heels of Shin Godzilla, the latest entry in the long running franchise, sweeping the Japan Academy Awards, this series goes beyond that huge shadow-casting series of films to look at lesser known examples of Japanese science fiction and fantasy films.

The series is curated by Variety and Japan Times critic and author Mark Schilling, who brings to New York a modified version of the program he presented at last year's Udine Far East Film Festival in Italy. It's a fascinating selection of films spanning from the 50s through the 90s, and it shows how filmmakers used the genres of science fiction, fantasy, and kaiju eiga to explore sociopolitical issues and national trauma.

Schilling, in addition to curating the series, will also give a lecture on March 25, 5pm, that is free for ticketholders. For more information and to purchase tickets, visit Japan Society's website. In the gallery below are some notable selections in the series. 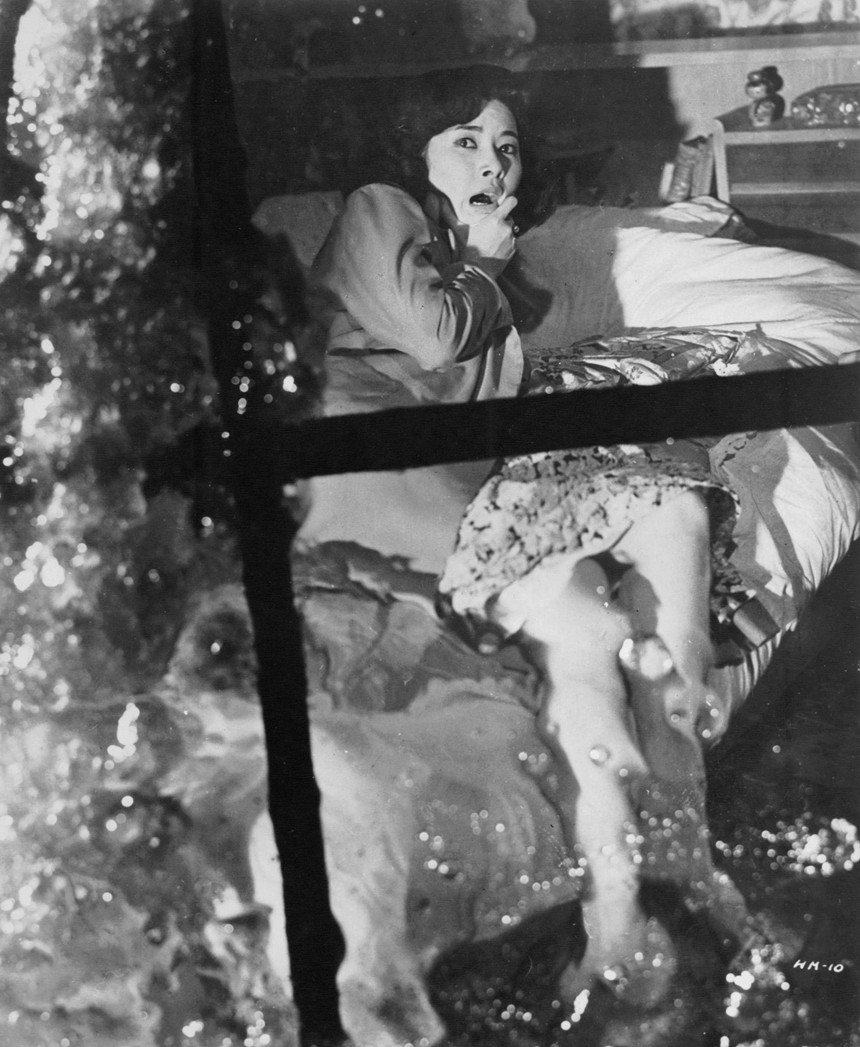 The opening night film, this is the first of two films in the series by Honda, the director of the original Godzilla, which was a well-made, often haunting and somber, and definitely non-campy film (unlike some later franchise entries) that tapped into national fears engendered by the nuclear bombs that hit Japan less than a decade earlier.

The H-Man, on the other hand, which Honda made four years after Godzilla, is so cheesy it should be served with wine and crackers. Especially in its re-edited, English-dubbed version, with the dialog as stilted and awkwardly delivered as you'd expect, all that's missing are the Mystery Science Theater crew providing snarky commentary in the margins.

The film is an unstable mix of genres: a noirish crime thriller, a monster horror flick, and a speculative sci-fi film. The "H-Man" is a creature formed from a radioactive, green and viscous substance that sort of looks like melted Jell-O. This substance liquefies humans and also becomes a green, glowing, ghost-like creature. For some reason, its central location is in and around a Tokyo nightclub; maybe the H-Man is a fan of torch singers and dancing girls. A scientist studying the effects of radioactive substances on humans and animals works with the police to identify and defeat the H-Man.

The H-Man very obviously taps into nuclear anxieties, which lends a serious, if ponderous, undertow to the film's sillier elements. It concludes with a nicely staged showdown between the H-Man and the Japanese military, using fire as their main weapon. Even if the film's overall quality is well below Honda's classic Godzilla, in the presence of a receptive and appreciative audience, it will no doubt make for fun viewing on the big screen. 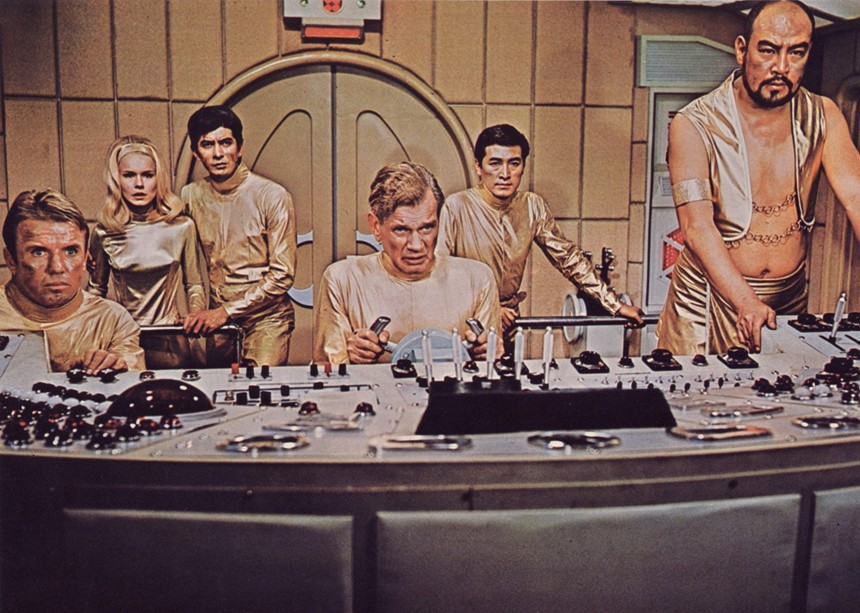 This mixture of utopian fantasy, undersea adventure, and mad scientist hijinks stars both Japanese and Hollywood actors, including Joseph Cotten, who starred in Citizen Kane, The Third Man, and, uh, this. It also features Cesar Romero, fresh off playing the Joker in the Batman TV series, who also plays a villain here, chewing the scenery with gleeful abandon.

Latitude Zero was intended as a Japanese/U.S. co-production, but Toho Studios ended up picking up the tab when the American production partner went bankrupt just as shooting was about to begin. The resulting reduced budget is most obvious in the creature work, which is hilariously bad, some of which is obviously portrayed by actors in ill-fitting costumes, accompanied by incredibly amateurish puppetry.

Yet this film has some charming elements as well. Cotten lends as much gravitas and dignity as possible to a movie which also includes a lion with eagle wings and giant rats. Latitude Zero, the undersea Shangri-la that Cotten benevolently rules, is a peaceful haven, free from competition, greed, and warmongering. Scientists and other thinkers, reported as dead or missing, have actually defected to this neutral kingdom, developing cures for humankind's ills.

Nuclear war is obliquely referred to here, as in much of Honda's other work. A Japanese scientist, kidnapped by Romero's character on the way to Latitude Zero, has been developing a cure for the effects of nuclear radiation. He wishes to go to Latitude Zero to make sure his invention isn't used by evil nations to immunize their own people while attacking their enemies with nuclear bombs.

So, look past the shoddy, cheap special effects, and you'll find a fairly diverting fantasy adventure.

Note: I previewed the English-language version of this film. According to Japan Society's program, it will screen in a Japanese-language dubbed version, with live English subtitles. 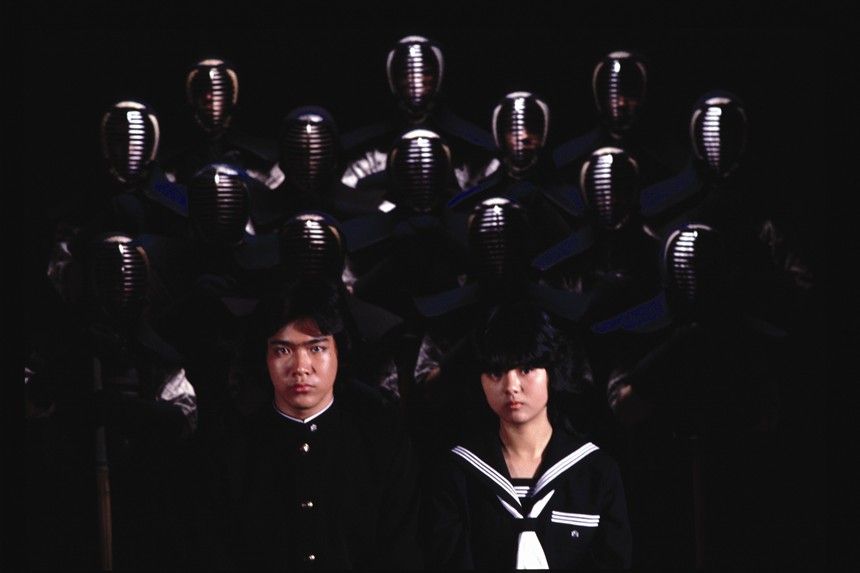 SCHOOL IN THE CROSSHAIRS (Nobuhiko Obayashi, 1980)

My personal favorite of the series, this is another delight by House director Obayashi, who employs his playful brand of outlandish, trippy special effects - many of which are done in-camera - to deliver a weird, wacky, yet beautifully made teen movie.

The film stars popular 80s idol actress Hiroko Yakushimaru (Sailor Suit and Machine Gun, W's Tragedy) as Yuka, a schoolgirl who discovers she has psychic and telekinetic abilities, and must use them to defeat a pair of fascist alien creatures who transform the school into a goose-stepping dystopia of extreme conformity.

Obayashi's cheeky, anarchic humor is evident throughout, from an early shot from the POV of a group of boys looking up schoolgirl's skirts as they climb stairs, to a choreographed dance number as the school clubs recruit new members, to the final, psychedelic showdown between Yuka and the fascist aliens. The alien plot serves as a neat dual metaphor, of both academic, school-system conformity and the distance between children and their parents, whose offspring, with their changing bodies and moods, may seem like alien creatures themselves. 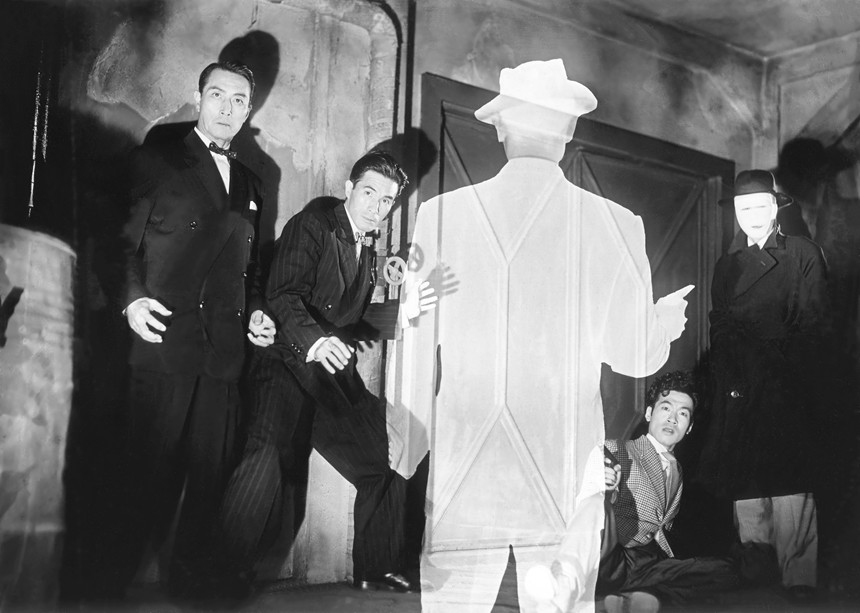 This version of the oft-adapted H.G. Wells novella followed very closely on the heels of Godzilla, and like that film, also had special effects by Eiji Tsuburaya. It's mostly an unassuming, low budget B-picture, whose main points of interest are its association with more celebrated, classic films, but it does contain some interesting commentary on the plight of Japanese veterans.

Their literal invisibility metaphorically represents the veteran's status as forgotten men in society. The gang of criminals wreaking havoc on Tokyo in the film were soldiers subjected to government experiments meant to create invisible warriors. However, after the war, they were abandoned by the government, and a group of them turn to crime and armed robbery for money and revenge against the country that used and threw them away.

There's some limited optical effects, but much of the invisible action consists of actors miming fighting with the invisible men. It's a decidedly minor, yet not uninteresting film.