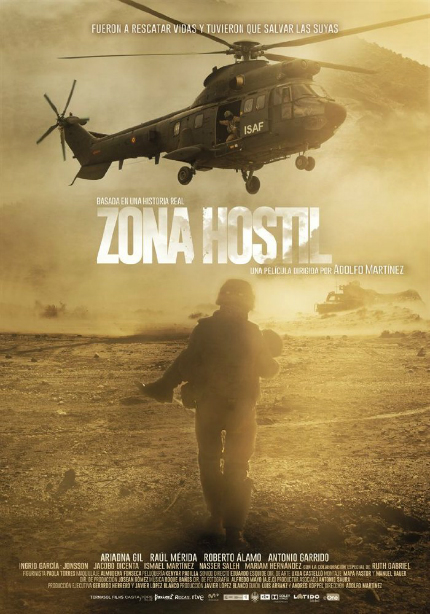 A new trailer for Zona Hostil (aka Rescue Under Fire) is a reminder that not all military heroes come from Hollywood.

Heading for release in its native Spain on March 10, Zona Hostil is based on events that took place in Afghanistan in August 2012, revolving around military personnel in need of rescue during a time of warfare. Ariadna Gil stars as a medical officer with the Spanish army; she arrives by helicopter and then becomes trapped in a very bad situation. Raul Merida, Robert Alamo, and Antonio Garrido also star.

Adolfo Martinez Perez directed. He's worked as a storyboard artist on Hollywood productions such as The Jungle Book and Oblivion; this is his feature debut and the action looks striking and very fierce.

No word on distribution beyond Spain yet; Latido Films is handling. More information is available at the official site.

Watch the English-subtitled trailer below.

Do you feel this content is inappropriate or infringes upon your rights? Click here to report it, or see our DMCA policy.
Adolfo Martinez PerezAntonio GarridoAriadna GilRaul MeridaRobert AlamoSpain