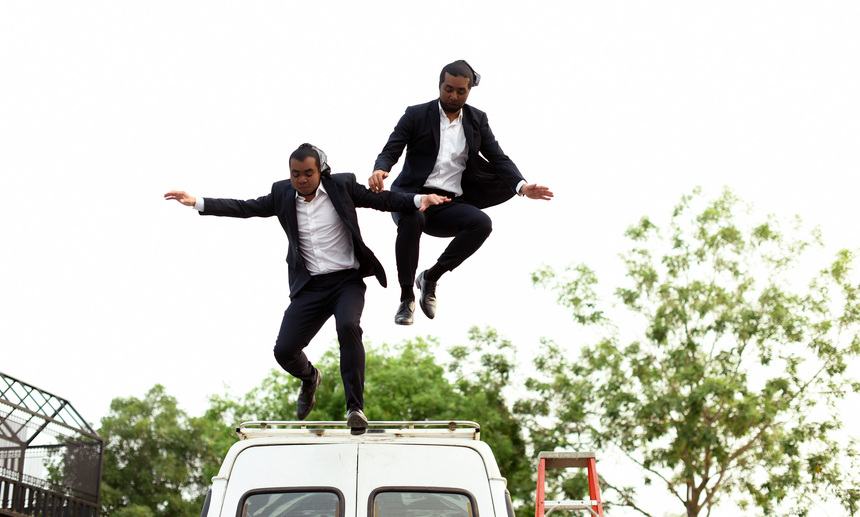 Professional bodyguards Viên and Trịnh's latest assignment -- protecting Henry, a rich brat who becomes heir to the LeMilk company after his father's death -- will make them sweat: the funeral is not even finished before Henry is kidnapped by a deadly gang. Bad news for them, but good news for audiences who have made this a huge hit in its native Vietnam and now have the chance to see it on these shores with the US release beginning Friday.

As our own Todd Brown pointed out in a previous article, Saigon Bodyguards reflects the undergoing globalization of the film industry. Produced by Canadian based Rhombus Media and Korean giant CJ Entertainment, this Vietnamese action comedy is helmed by Japanese director Ken Ochiai (The Tiger Mask, Ninja the Monster). Probably due to its international nature, the film quite stands out from other Southeast Asian productions, which mostly generate variations of the romantic comedy.

I'm always pretty saddened to see how insulting it is to use adjectives such as "silly" or "stupid" to describe comedies. Isn't it the goal of any funny film to tackle boundaries and push the limits of absurdity? This is why I'm so fond of Stephen Chow's mo lei tau films and of basically any nonsensical Hong Kong comedy. Saigon Bodyguards doesn't totally belong to this category but certainly celebrates the art of being funny without striving to look clever - perpetuating instead the tradition of burlesque.

A good chunk of the humorous elements comes from the two main protagonists, who are perfectly characterized and cast. Whereas Trịnh (Kim Lý) looks like the Vietnamese little brother of The Rock, Viên (Thái Hoà) fully embraces the typical, lustful clown that is quite recurrent in Hong Kong cinema. These characters might embody prototypical figures but through Ochiai and writer Michael Thai's pen, they get both cleverly portrayed as counterpoints of the clichés they refer to: as such, Trịnh appears as a soft-hearted and attentive muscle man while Viên proves to be a physically unusual funny ladykiller.

This alternative configuration brings the fun in a lot of scenes, where both verbal and physical types of humor are frequently summoned. Ochiai proves to be a very generous director and offers many entertaining scenes (the film contains one of the funniest lessons of philosophy I've ever seen) while fueling his story with over-the-top setups (there's even a Lan Kwai Fong 3-like boat party). And of course, the fundamental element of most buddy movies - the inherent bromance - isn't missing here; on the contrary, there's even a cheesy and hilarious flashback that nurtures it, with tons of homoerotic innuendos.

So far I've only mentioned half of the film's core and left the action part out. But rest assured: even if the first action scene is mostly off-screen, from the kidnapping scene and the impressive chase that follows, Saigon Bodyguards will treat you well. Even if we always wish that the editing were less rapid fire and the shots were steadier, one can really notice how the director did his best to provide good action scenes, even trying to bring an original take on it. There is, for instance, a very good scene taking place inside a van in which the use of space and choreography are very well balanced, as well as an ambitious attempt at a (rigged) long take. It may be less powerful than that of Prachya Pinkaew's Tom Yum Goong, but it underlines the will of Ochiai and his team to offer more than just repetitive fighting sequences.

Where the film fails to convince, however, is with its dramatic scenes that are hammered by the use of identical musical cues and that fall quite flat in-between the continuous jokes. This weaker dimension may well be a minor part of Saigon Bodyguards, but it doesn't help the sometimes uneven pace of the film that takes a flew blows during some of the long dialogue scenes. A tighter script would have helped the film to gain even more entertaining prowess.

With that ending scene teasing for a sequel, one can only hope this will actually happen and that the team will make something bigger and louder. Sillier and funnier. Somehow similarly to his protagonists who look for paternal recognition, Ochiai lives up to his filmic references. With Saigon Bodyguards being one of the biggest local hits in 2016 -- even beating Rogue One on the opening weekend --, the box office seems to be a good indication of it.

Do you feel this content is inappropriate or infringes upon your rights? Click here to report it, or see our DMCA policy.
action comedyken ochiaikim lyreviewsaigon bodyguardsthai hoavietnam