Tough, tense, thoughtful, and terrific, Logan is truly the first superhero movie for adults, not for kids or arrested adolescents.

Granted, it's best for adults who have a tolerance for bloody, vicious violence. One of the characters claims the violence is only wielded against people who deserve it and that's true for the most part. Nearly every time a fight breaks out, though, it threatens to be a fight to the death, since the assailants want to lock up (or kill) every super-powered mutant in sight.

Set in the near future, the movie immediately establishes a dark tone for the story that follows. Director James Mangold does not waste any time in revealing that James Howlett (Hugh Jackman), the birth name of the mutant known as Wolverine, may have retired from his career as an action hero, yet he still retains fierce fighting skills. When pushed too far, not only do the claws come out, but also the animalistic fury that the character has become known for over the past 17 years on the big screen.

By night, he drives a limousine, identifying himself as Howlett; by day, he is Logan once again, his adopted name, and cares for his old friend Charles (Patrick Stewart) on a rural property in West Texas. Fellow mutant Caliban (Stephen Merchant) also stays there and helps care for Charles. All of them have seen better days, and all of them have seen their mutant powers decline and weaken as they have aged.

Whatever advantages the mutants may have enjoyed in the past have disappeared by the time the story begins. They have been nearly wiped off the face of the earth. Those who remain are hunted down and/or experimented upon, most notably by Zander Rice (Richard E. Grant), an evil surgeon.

In service of Rice, the despicable Donald Pierce (Boyd Holbrook) comes calling at Logan's hideout, in search of a little girl named Laura (Dafne Keen). Logan wants nothing to do with anyone, really; he's trying to save money to buy a boat and head out to sea (and presumed safety) with Charles. Laura's mother has already entreated him for help, a plea that Logan rejected outright.

For all his gruff exterior and pained expressions, Logan still has a heart. When he sees Laura, is he seeing young Rogue (Anna Paquin), a girl he helped in X-Men (2000)? Perhaps, though this movie never makes it explicit. In any event, Laura's mother offers him a big wad of badly-needed cash to help them, and Logan is, reluctantly, in. 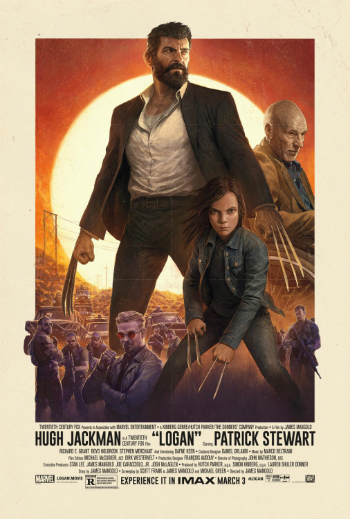 From there, the movie becomes a desperate chase thriller. Any time that Logan is standing still is a moment when he knows that attack is imminent, usually from an untold number of well-armed military men. His mission is simple: get Laura from West Texas to a location in the desolate, far north U.S., where safety is possible.

The road trip is aided and abetted by Charles. The trio form an odd sort of family, but what it really allows is for Jackman and Stewart to give performances that go beyond what they've done before in the X-Men series. Really, the success of the story depends on their chemistry as well as their ability to portray their familiar characters in unfamiliar circumstances.

It's not just the R-rated language, though it initially sounds almost shocking to hear their characters throwing around a plethora of f-words. It's not even the R-rated violence; after all, there is no glory in metallic claws poking through and tearing apart bodies; it's survival of the fittest.

More than that, it's the justifiable resignation that each of them feels and expresses in varying degrees. Actions have consequences, after all, and far more than the Man of Steel saying he's sorry for all the massive destruction he's caused, Jackman and Stewart are able to convey that anguish through their subtle facial expressions and body language.

It's not uncommon for people in their later years to feel genuine sorrow over the mistakes they've made and others they've hurt, either through their actions or inactions. It is uncommon to see those type of emotions in a superhero movie, and that is part of what makes Logan so effective.

The cleanly-choreographed action sequences are a definite bonus. Without relying overly much on the typical hack-and-slash editing that pollutes so many modern Hollywood action movies, the framing and staging makes allowance for the necessary intrusions of multiple stunt people while keeping things tight and comprehensible.

The on-point pacing helps tremendously. Film editors Michael McCusker and Dirk Westervelt not only knit together the action scenes effectively, they also maintain a good sense of momentum during the dramatic sequences, and enable the few comic moments room to breathe.

Logan is a captivating journey. It's almost a daytime noir that carries with it an air of inevitability, while simultaneously allowing little time for such thoughts. Yes, there are heroes in the movie, but there is also a strong, buffeting wind of discontent and disillusionment that is something quite distinct from what has come before in the genre.

The film opens wide in theaters throughout North America on Friday, March 3.

Do you feel this content is inappropriate or infringes upon your rights? Click here to report it, or see our DMCA policy.
Boyd HolbrookDafne KeenHugh JackmanJames MangoldLoganPatrick StewartWolverineX-Men