Psycho Pompous: Impressionist Horror of France and Italy, Part I 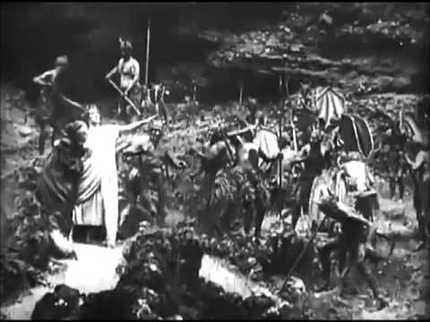 Adaptation and evolution are essential tools needed for any art to survive through time. Though, during its infantile existence from 1895-1915, innovators had been highly ambitious in the technical quality of filmmaking (i.e. DW Griffith, Edwin Porter), their expression of fantasy (i.e. Georges Méliès) and the investigation into the psychological realism of the human condition (i.e. Yevgeni Bauer, Yakov Protazanov). Though there already had been many major movements in art from antiquity till the present, film was still a young process where much exploration hadn't yet occured. It was only relatively recently that photography was no longer just a tool to produce the sharpest images, but as an expression of artistic merit.

Peter Emerson published Naturalistic Photography for Students of the Art in 1890, which served as a call to emphasize accurate and unmanipulated images of nature. And considering the presentation and exhibition of films at the turn of the 20th Century, Emerson's theory had the most sway, which also was the more easily accomplished method. However, some twenty years prior, Henry Robinson had published his book, Pictorial Effect in Photography. This was the work that helps spur the very first artistic photographic movement into action, pictorialism. This school of art posited that photographs can contain symbolic or allegorical messages that reached beyond a simple record of a subject. As techniques and equipment advanced, the originally exclusive arts of photography, theater and narrative would begin to fuse together, as would their schools of thought. Filmmaking, as a result, evolved as a deeper intellectual and artistic medium. The movement that was the result of this intial blending of the crafts, originating from France which would come to spread across the world, was known as impressionism.

This movement is also referred to the very first of the avant-garde films, which this critic actually finds amusing that film wasn’t even around as an art or industry for even 20 years by this point, and there already were movies considered “outside the norm”. The strongest aspects of impressionism would not only breed the very first wave of legitimate horror films to ever be produced (as opposed to fantasy films mixed with some horrific elements that was generally the norm), but it would inspire German filmmakers to take their notions steps further and birth expressionism, which would hold the glowing standard from which all horror in world cinema would follow. However, impressionist films are a bit tricky to group together, with many film historians and critics still debating what the movement was, which films/directors belonged to it, or if it really was a movement at all.

Impressionism is currently defined as a genre of French filmmaking established roughly in 1910 and continued until around 1930; though there are still films being made today with impressionist influences (see Quentin Tarantino’s Kill Bill and Lars von Trier’s Dancer in the Dark). The inception of the movement would normally be accredited to French director Abel Gance, with the creation of his films The Mask of Horror in 1912 (also serving as one of the first French horror films ever made), and La Folie du Docteur Tube in 1915. Though his most famous entries in impressionism would be his feature La Roue (1922), and his groundbreaking masterpiece Napoléon (1927), impressionism in film, this critic feels, truly began with a different set of directors from Italy.

Though it would come to be released in 1911, its production would begin in 1908, preempting the film careers of greats like Yakov Protazanov, Yevgeni Bauer and D.W. Griffith, (also possibly aiding inspiration to the innovators in the creation of their seminal works, and those they directly inspired as well, as was discussed in the previous installment) and the creation of J. Searle Dawley’s Frankenstein. Loosely adapted from Dante Alighieri's The Divine Comedy, L'Inferno was the work of three directors: Francesco Bertolini, Adolfo Padovan and Giuseppe De Liguoro. There isn’t much I know about Padovan, as all of his known existing credits were all released in 1911 and are extremely difficult to locate. Bertolini had the last of his known, sparsely-released credits being Il trionfo di Ercole in 1922; he would also be noted as the stunning production designer of L’Inferno. However, Giuseppe De Liguoro is one of the most prolific Italian directors of the early silent era, even before his involvement in L'Inferno, having already created well over twenty films. He would also come to star in the film in a portrayal of Farinata degli Uberti, an actual Italian aristocrat of the 1200s, who was accused of being a heretic.

Besides being the first Italian feature-length film (the assembly print ran just over 68 minutes), L'Inferno can also be considered the very first international blockbuster; taking in millions of dollars in foreign markets such as the United States, United Kingdom and Germany before such a thing was viewed as possible. Though this was in-part due to the elevated ticket prices in venues in regards to the film’s length, it became evident that the old chestnut (we continually hear to this day) that ‘audiences do not want to be scared’ was firmly dismissed as incorrect. Though the international film industry would not come to embrace this until the advent of expressionism some ten years later, it made everything succeeding its release possible. This is another reason why horror filmmaking became one of the hallmark genres of Italy, but also gave us some of the best the genre has ever produced; namely Mario Bava’s Black Sunday, Dario Argento’s Suspiria, Lucio Fulci’s Zombie (aka Zombi 2), Lamberto Bava’s Macabre and Ruggero Deodato’s infamous Cannibal Holocaust.

However, as this was long before the days where visual horror was so widely and readily available, Francesco Bertolini had an insurmountable task of creating the unnerving mood that would come to define the film and likewise the genre it would help propagate. Though The Divine Comedy is rife with disturbing descriptors and events, Bertolini took his inspiration in a semblance of intriguing places. Firstly, the engravings produced by Gustave Doré for a reprinting of Alighieri's masterpiece had direct correlation, many of which were replicated almost exactly in many key scenes in the final film. However, for the rest, Bertolini seemingly would turn to the iconography of Georges Méliès and the practices of the time-tested Freak Show.

The influence of Méliès is as evident as saying the sky is blue, as most filmmakers at the time were attempting to snag a piece of the influence and creative genius that the French auteur was bringing onto the scene (the other standard was put down by the technical skill and story-telling finesse of Edwin Porter). However, unlike Méliès; Bertolini, Padovan and De Liguoro equipped their lengthy adaptation with the very real elements of the Italian landscape, mostly evident in the first third of the work, which would serve as one of the earliest examples of non-studio filming that would become the standard in Europe in roughly thirty years. But also, when the characters of Dante and Virgil are trekking through the many levels of Hell, the environments and actors are all played up to be as realistic as possible, even if they are not in the slightest. This is especially true of the juxtaposed scenes of characters that are being retold by others in the film (such as the one involving Uberti, which utilizes a perspective, setting and lighting set-up almost identical to the specter-torment scene in Protazanov’s Queen of Spades). This stance is one of the very defining elements of impressionism, as most of its art focused on scenes of ordinary life and the outdoors. This is opposed to the portraiture and confined studio control that traditional art had reinforced for the better part of the last hundred years which Méliès’ filmmaking style piggybacked to ensure the full scope of the fantasy worlds he created.

However, as was aforementioned, Méliès made films to capitalize on the fantasy of film itself, embracing the visual concepts of transporting the viewer to extravagant settings to fire their imagination, as opposed to the humanistic filmmaking of Imperial Russia gaining traction which pitted real human archetypes against themselves, bringing the full spectrum of human reality to the fantasy of filmmaking. Méliès' approach to filmmaking would be survived in several forms and would be revitalized several times in the US as what this critic calls Hollywood chic, which would come to boast films devoted to overly-romantic visions of life, its passions and its tribulations (examples being Intolerance (1916), Gone with the Wind (1939), Singing in the Rain (1952), etc.). This brings me to the Freak Show.

Reaching their peak of popularity in the 19th Century, Freak Shows were staples of entertainment in England and America, most famous of which was the story of Joseph Merrick, aka The Elephant Man (which would be re-told to modern audiences in the 1980 adaptation by David Lynch). His story becoming a worldwide sensation began the demise of such entertainment that by the time filmmaking was entering the scene, plenty of laws had been enacted globally to halt exploitation of deformities (which would be an added reason to why Tod Browning’s masterwork Freaks received such a backlash upon its release in 1932). But the fascination of Freak Shows did not diminish even if the art seemingly did. It can be believed that the attraction to the first exhibitions of physical horror fueled L'Inferno’s team, many of the haunting figures and sets from the movie relying on the same aspects of raw spectacle and shock (including full nudity featured extensively throughout the movie), it could be contested this was also to be the first wide-release of an exploitation film.

Now, realistically Italian opera I could consider to be another part in the creation of this movie and in horror filmmaking in general, being some of the most influential operas of all time (such as Giacomo Meyerbeer’s Robert le diable) being themed around horror stories, which also included non-Italian composers adding to the trend (Mozart’s Don Giovanni). With this cultural institution being one of the longest feathers in Italy’s cap, it influenced art and life for generations in the country, as it also was a product of the lifestyle and romanticisms of the Italian people, it reflected the fascinations of the public and what stories they would come to lust after.

Though, as you may have already noticed, all of the above have their roots in theater, pantomime and most specifically classic literature, all of which were at the forefront when it came to creating movies. Now, where L'Inferno is the source from which impressionist horror would come to flow, the Italian model of this would combine with the know-how of two very talented filmmakers hailing from Russia that would create what could be considered the very core of what early horror movies needed in order to evolve and thrive as its own artform: Fedor Ozep, who was a long-time collaborator of Yakov Protazanov (including being the writer of Queen of Spades), and Dimitri Kirsanoff, who would create a the film Ménilmontant, which this critic feels defined not only impressionist horror in film, but impressionism in film as a whole.