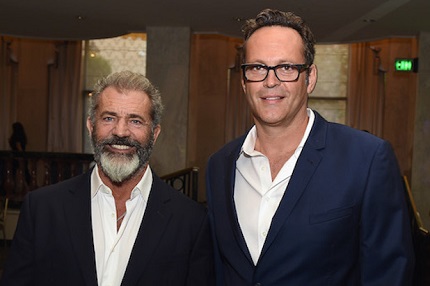 From the crop of American filmmakers who have impressed the Screen Anarchy family in recent years with their debut feature films, S. Craig Zahler's Bone Tomahawk was no exception. It was dark, nasty and the violence in the latter half of the film was the cinematic equivelant of blunt force trauma. We loved every stomache churning moment of it.
As the filmmaker works on his follow up Brawl in Cell Block 99 THR broke the news that Mel Gibson and Vince Vaughn have signed on to a new project of his that will be presented to buyers at the EFM. Let us introduce you to Dragged Across Concrete.

The script centers on two policemen, one an old-timer (Gibson), the other his volatile younger partner (Vaughn), who find themselves suspended when a video of their strong-arm tactics become the media's cause du jour. Low on cash and with no other options, these two embittered soldiers descend into the criminal underworld to gain their just due, but instead find far more than they wanted awaiting them in the shadows.

Vaughan must have liked his time with Zahler on Brawl in Cell Block 99 to return to work with the director again. Zahler will direct from his own screenplay.
1
Sign-In to Vote
Tweet 0 Submit

Do you feel this content is inappropriate or infringes upon your rights? Click here to report it, or see our DMCA policy.
Berlinale 2017Dragged Across ConcreteEFM 2017Mel GibsonVince Vaughan

BONE TOMAHAWK had a terrific script and performances. The problem was that it was filmed rather flat and TV-like.

I realise they were working on a very low budget but I can't help but think that with a bit more visual energy it could have taken a really good movie up to being a great one.

I'm in. Thanks for the heads up.

This is one of those cases where I Agree and Disagree..
~
...take with just a grain of sand; but sometimes that aspect of a low "see-thru" budget is a: Damned if You Do ~ Damned if You Don't affair, ... ..*apologies*.
--- I wonder if maybe its --- smaller production was a way of "ratcheting" up the realism, to go along with the believability in said film... ..Although - by all means; such a decision might always be a double edged sword..