Blu-ray Review: THE TREE OF WOODEN CLOGS, Far From a Wooden Slog 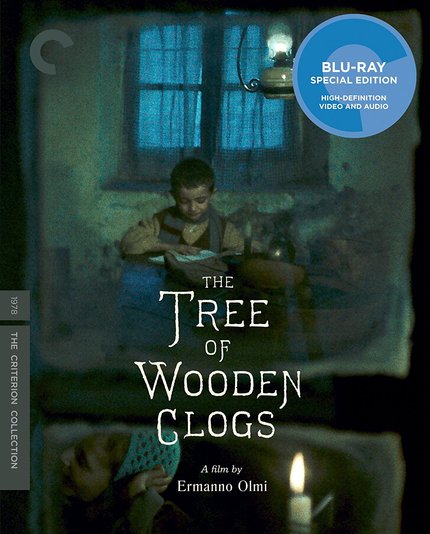 "I'm going to find a tree to chop down."

Like Bill Murray in the afore-referenced Wes Anderson fave, Tree also features a despondent father with a literal ax to grind as part of its sprawling ensemble. Except, Olmi's makeshift lumberjack is no laughing matter. He dare not utter of his tree chopping. He has his reasons; reasons which prove impactful and costly.

Olmi's The Tree of Wooden Clogs is, like Malick's The New World, one of those rare period films that has built its world so well, it's easy to forget that the filmmaker did not take his crew back in time to make it. Cast completely with non-professional locals who knew the turn-of-the-century ways of their impoverished farm working ancestors, and spoken in Bergamasque, an Italian tongue so obscure that the film had to be subtitled in its native country, Olmi's strict insistence upon absolute authenticity is felt at every possibility. A warning for the squeamish: In the first hour, two animals are routinely slaughtered for food, for real, on screen. Part of life in the commune back then.

An ensemble piece through and through, Clogs follows four families, circa 1900, living in communal housing provided by their land-owning boss. In exchange,they must always work hard, with 2/3 of their haul going to him. It's a life of exhausting exploitation, but the thought of transcending it never crosses anyone's mind.

The look of the film is a curiously unique and deceptively intricate one, boasting an earthy palate and lighting scheme of classical master painters of yore. The farmhouse is tactile yet seemingly decaying before our eyes. The grounds are lined with struggling, leafless trees that appear to have given up after being completely pruned, then, after sprouting a few new thin branches, thought better of it and died anyway.

These trees are, like everything else in sight, the private property of the landowner. When one worker's son breaks his clog that no one can afford to replace, a tree is cut down under the cover of night to make another. The consequences for this resonates, a young boy's innocent accident unjustly ballooned. 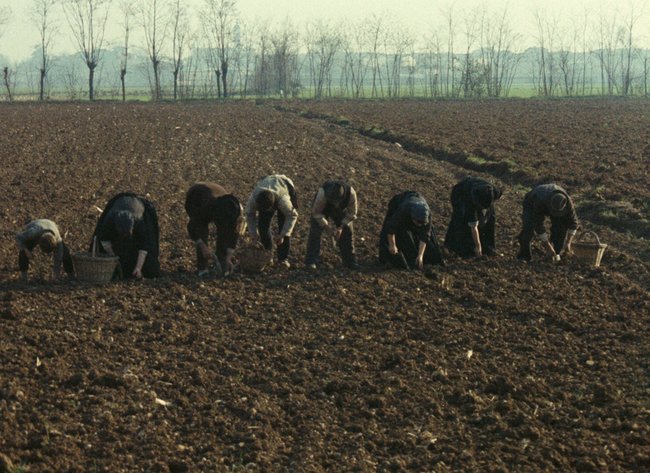 The film very much feels like a masterpiece, and not because it's over three hours long. While a long foreign language film about poor farming families living their day to day lives might sound like a dull trudge, The Tree of Wooden Clogs is anything but.

Like that other, newer revered tree-titled film that interweaves Christian faith with the honest toils of life, The Tree of Life, by Malick (him again!), it is neither pretentious nor slow moving. Another similarity is the use of existing classical music for the film's soundtrack, in this case entirely Johann Sebastian Bach. Unlike The Tree of Life, though, Olmi's Tree is firmly of the earth, and in its own time. Families gather, they plant seeds, we witness coy young love, some tragedy, and maybe even a miracle. Life's many branches, laid bare.

Criterion's Blu-ray of The Tree of Wooden Clogs has been forthcoming for so long, one is tempted to check the disc for stump rings. The wait, however, from it's delay in November of 2016, was entirely worth it. The image maintains a satisfying late 1970's grain-ridden texture within its 1:1.37 aspect ratio (as it was originally shot for television). Extras include a terrific vintage 52-minute TV episode about Olmi's career, a panel discussion with some of the cast and crew, two older interviews with Olmi, and more. Critic and journalist Deborah Young has contributed a fine printed essay, analyzing the film.

The Tree of Wooden Clogs is a wonderfully great Italian film that is well deserving of its place in the Criterion Collection. Don't miss it, as timeless cinema of this variety doesn't grow on trees.

Do you feel this content is inappropriate or infringes upon your rights? Click here to report it, or see our DMCA policy.
CriterionErmanno OlmiPalme d'OrThe Tree of Wooden Clogs

More about The Tree of Wooden Clogs