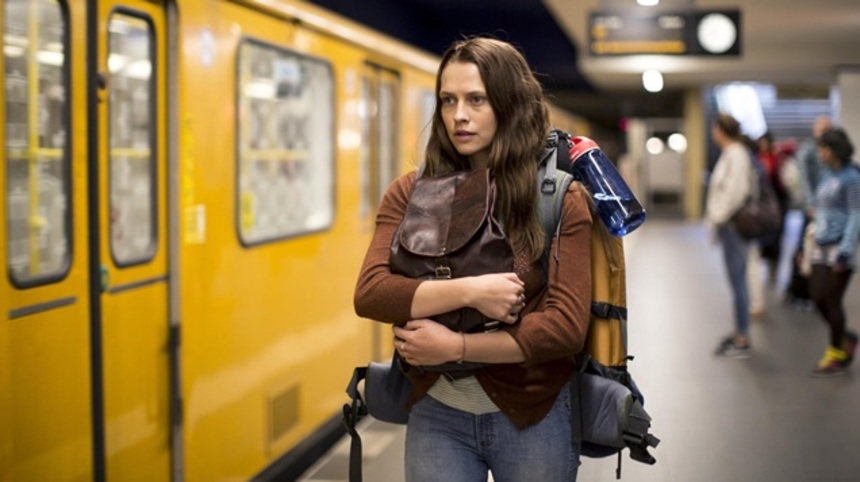 From Jutin Kurzel's Snowtown in 2011 to Ben Young's recent Hounds of Love at last year's Venice Biennale, Australia has developed a real knack for messed up cinema, and Cate Shortland's recent Screen Australia and Film Victoria supported skin-crawler is right on the money there. It's one of those disturbing experiences you just can't stop thinking about after you have seen it.

I'm not entirely sure why Australians are so great at envisioning tales of awful social, mental and physical torture, but it's clearly something that the local industry is fully on board with, and when the results are as compelling as Berlin Syndrome, you can probably understand why. As the title suggests, though, Shortland's movie moves out of the troubled Australian suburbs of her predecessors, and like an eerie Gothic novel (in this case literally an adaptation of a book of the same name) Berlin Syndrome relocates itself somewhere real but distant, familiar but exotic: the melancholy capital of Germany.

As a result, the film must have been a no-brainer for inclusion in Berlinale's Panorama Special selection, but the impression we get of the city in this gripping life-or-death thriller isn't necessarily always positive. If Sebastian Schipper's Victoria was an ode to the coolness and life-changing freeness of the metropolis, then Berlin Syndrome is very much the anti-Victoria. Instead, it pictures the capital as a seat of anger and dysfunction, a place where happy-go-lucky foreign girls can quite easily lose their freedom to cold, brutish locals.

In this case, the girl in question is Clare (Teresa Palmer), a young, outgoing woman from Brisbane. In other words, one of the 24 million Australian backpackers who seem to be perpetually making their way round Europe at all times. For the first third of the movie or so, it therefore looks a bit like Clare's experiences in this film are not going to be all that dissimilar from Schipper's heroine. Clare enjoys the delights of the city, and even attends a roof party with some cosmopolitan locals, just as Victoria does.

Unfortunately for Clare, however, her path also crosses that of Andi Werner (Max Riemelt), a native who takes a bit too much of an instant liking to the foreigner as she is touring the city. What follows is a bit of a whirlwind romance filled with lots of beautiful, yet cold colourful cinematography by Germain McMicking (whose visual signature you will definitely recognise if you have previously seen Ariel Kleiman's Partisan), something which slowly lays the seeds of doubt in this movie.

Plus, if it wasn't already obvious that you should never trust a fully grown man called "Andi," the character also occasionally mutters sinister things under his breath in German, which in a great bit of dramatic irony, we get to understand whilst Teresa does not. Before long, Clare is waking up in a renovated flat in one of those big Kreuzberg apartment blocks, as moody cello music weeps in the background. Unluckily for her, the flat is in an abandoned building and the renovations mostly included thick reinforced-glass windows and a big, black metal brace that sits at chest height on the front door, preventing anyone from leaving without a key.

In a moment of spine-tingling clarity, it becomes apparent that she has been locked in the terrifying Berlin equivalent of Josef Fritzl's basement, and she is at the complete mercy of a smart and well-prepared lunatic. What's worse, it seems like he may have done this with other girls before, and they may not have made it out alive. So it may be dawning on you at this point that yes, yes we are again looking at a film which uses a character with a German accent to represent a creepy, sadistic maniac. Stick with it though, because (as always) it totally works.

Foolish jokes aside, Riemelt's performance as a controlling psychopath is really rather masterly, and the same is also true for Palmer, who in her more victimised spells almost looks a bit Carrie White on a bad day (but in a very good way). But maybe this is where Berlin Syndrome does become a bit problematic, because we have probably all seen a whole bunch of films where women are physically or mentally abused, and maybe it is time for this to stop? Maybe it really is just time for us to rewrite this cultural leitmotif altogether?

The film is made by a female director though, so maybe what do I know? Either way, Clare is definitely one of those strong, resilient female protagonists (and that's always all that matters, right?). So before long she becomes locked (pun intended) in a battle of wills and wits, and the two ex-lovers fight tirelessly to gain control over one another. The story therefore becomes something of a brutal riposte to the idea behind the so-called Stockholm Syndrome, because Clare never becomes one of those hostages who develops a deep attachment with her oppressor.

That said, there are fleeting moments where the violence subsists in this film and Andi comes to look more human, and in those moments Clare's thoughts or feelings do almost immediately sometimes turn to lust or affection, just as they would in a case of Stockholm Syndrome. The fight literally never leaves Cate though, and that is exactly what makes Berlin Syndrome such a compelling watch.

I not even sure I understand why Prison Break-esque scenarios where individuals must fight for freedom using their ingenuity are so compelling (except for maybe a basic human love for problem-solving), but my God are they enthralling. It's that absolute "what if" scenario, where you just can't help but ask yourself what you would do if an unstable German man tied you to a bed until you soiled yourself. Even if you wanted to, you can't not ask yourselves these kinds of questions as Shortland's movie unfolds.

As a film, Berlin Syndrome is therefore terrifying in many more ways than one, and there really are some particularly unflinching scenes involving a screwdriver and a door. The door one is particularly bad. Socially speaking, however, the film's male-female dynamic is maybe a bit problematic, and that is perhaps what compels me to ever so slightly send it up.

In all seriousness though, these kinds of dark sides of human nature do exist and there's no point trying to pretend that isn't the case. So as purely a case study of a never over-explained male psychopath and genuinely traumatised female victim, this thriller is brilliant, and definitely ripping, tangible viewing throughout.

Visitors to Berlin beware, Andi Werner is out to get you and he won't let you leave alive if he can help it...

Do you feel this content is inappropriate or infringes upon your rights? Click here to report it, or see our DMCA policy.
Berlin SyndromeBerlinale 2017Cate ShortlandMax RiemeltTeresa Palmer