70s Rewind: INSERTS, Place an X Over Its Heart 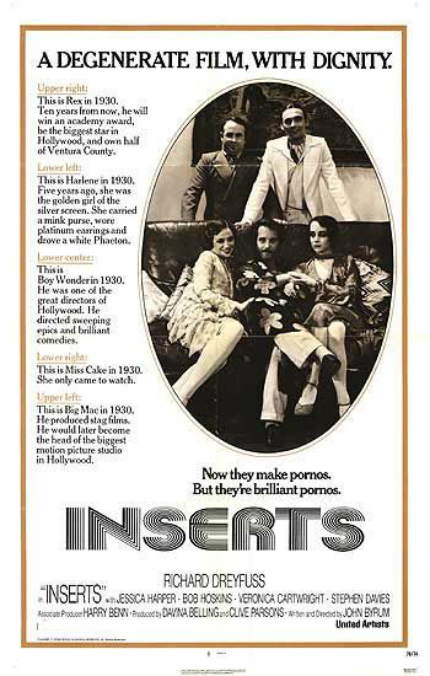 Richard Dreyfuss once starred in an X-rated film. Let that sink in for a moment.

Placing that into proper context reminds us that the 1970s were a very different time. The MPAA film rating system became effective in the U.S. on November 1, 1968. Six months later, John Schlesinger's Midnight Cowboy received an X-rating, and less than a year later, became the first (and only) X-rated film to win the Academy Award as Best Picture.

Russ Meyer's Beyond the Valley of the Dolls earned the X-rating for its release in June 1970, Stanley Kubrick's A Clockwork Orange received it upon its original release in the U.S. in February 1972, Ralph Bakshi's animated Fritz the Cat was tagged with an X in April 1972, and Bernardo Bertolucci's Last Tango in Paris met the X when it was released in the U.S. in February 1973.

They were hardly the only movies to receive an X-rating; some 13 movies received an X in 1969, 22 titles in 1970, and 34 movies in 1971. Only nine titles received that designation in 1972, but the following year saw the success of the X-rated Deep Throat and The Devil in Miss Jones, which further shifted the rating away from more serious adult fare toward more explicit sexual entertainment.

Reportedly, Inserts was produced sometime in 1974, though it did not open in U.S. theaters until February 13, 1976. By that time, the idea of an serious, X-rated, mainstream picture featuring a Hollywood star made it an anomaly, yet not one that made it many fans. Truth be told, Inserts is very unpleasant to watch through its first half because of its X-rated content, most specifically because the rating was undoubtedly incurred during a rape scene.

Even before it reaches that point, though, the movie is not terribly inviting. It's set in 1930 and takes place entirely in a somewhat decrepit Hollywood mansion owned by a filmmaker nicknamed 'Boy Wonder' (Dreyfuss). As the story begins, an actress named Harlene (Veronica Cartwright) bustles inside and undresses.

The two have a cozy relationship, but Harlene is primarily interested in doing drugs. She's also arrived to shoot a sexually-explicit "insert" scene, to be directed by Boy Wonder. He was supposedly an early master in the silent film era who has now fallen on hard times because of his alcoholism, and is reduced to shooting inserts on a makeshift set in his living room. 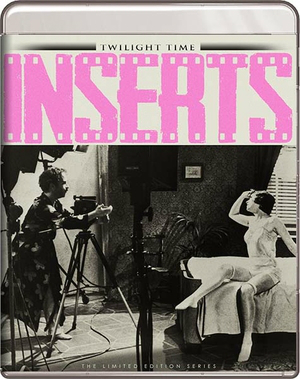 Boy Wonder and Harlene are soon joined by a young actor called, dismissively, 'Rex, the Wonder Dog' (Stephen Davies). He is annoying and ambitious, which makes for very unpleasant company when combined with Harlene, who affects a sing-song, high-pitched voice, and Boy Wonder, who evinces an incredibly mannered personality that soars and swoops into flamboyant artificiality.

This sour tossed salad achieves fever pitch in the rape scene, which is rather disgusting to behold, even after it's over and Boy Wonder and Harlene express their joy at 'getting the shot.' Then, in walks Big Mac (Bob Hoskins) and his might-be fiancee Cathy Cake (Jessica Harper) and things change.

Big Mac is financing Boy Wonder's work and wants to check on the progress. Initially hanging on his arm, aspiring actress Cathy Cake says she 'wants to see everything.' The temperature in the room rises after their entrance.

Make no mistake, Inserts doesn't become kinder and gentler. If anything, it's even more ruthless after Big Mac and, especially, Cathy Cake show up. While Big Mac is a rat-a-tat Hollywood type, Cathy Cake is something altogether different, a woman who tries out her own powers on Boy Wonder, once Big Mac, Rex and Harlene depart the scene.

It's a marvelous performance by Harper, who was just at the beginning of her film career. Evidently She made this movie before * after Brian De Palma's Phantom of the Paradise, and the two performances are nicely complementary in showing the range of her talents. Here she appears to be overwhelmed by Boy Wonder, yet then shows her teeth and puts him on edge with her frank ownership of her own sexuality. Dreyfuss gives a much more direct, less mannered performance opposite Harper. They make a connection on screen that is palpable.

Davies, Cartwright and Harper spend a lot of screen time in the buff, to the point that it becomes less of a distraction and more a part of life, which is still a rare thing to see in American films. The sexual activity defines the characters to a certain extent: Boy Wonder, who suffers from impotence, drives his actors to do things that he cannot. Rex and Harlene enact a very rough rape scene, though that appears to magnify their own ugly, shallow views on life; Rex gains satisfaction only through assault and violence, while the fundamentally unhappy Harlene seems to accept the role of victim because she doesn't find any value in herself.

Beyond the sexual activity, Inserts also functions as a commentary on Hollywood past. It was part of a trend of movies that looked back at that period of moviemaking. The previous year had seen the seamier side, in James Ivory's The Wild Party (March 1975) and John Schlesinger's The Day of the Locust (May 1975), and the more nostalgic angle, in Howard Zieff's Hearts of the West (October 1975).

Inserts was followed in 1976 by Mel Brooks' Silent Movie (June), Elia Kazan's The Last Tycoon (November) and Peter Bogdanovich's Nickelodeon (December), and in 1977 by Ken Russell's Valentino, (October) and Gene Wilder's The World's Greatest Lover (December), among others.

Filmmakers in the 1970s were using the greater freedoms afforded to them to comment more explicitly on their forebears. John Byrum made a splash by writing Harry and Walter Go to New York and Mahogany, but Inserts was another thing entirely. Shot on one set (in England) with just a handful of actors, this is a movie that feels like a play, and Byrum uses that claustrophobia to his advantage.

The first half of the movie feels oppressive, which is lightened when it becomes a two-hander for much of the second half. Byrum would go on to make Heart Beat, The Razor's Edge and The Whoopee Boys (?!) before turning to television.

Dreyfuss appears to have made this film soon after Ted Kotcheff's The Apprenticeship of Duddy Kravitz, and his performances in the two films reflect a similar tone, leaning a bit too hard, too often on the hysterical edge. Yet the actor was also capable of reigning in his excesses to hit very intimate and convincing notes. Some of his very 'actor-y' impulses seen in this movie were later played for laughs in The Goodbye Girl, where they fit much better.

Harper seldom received similar opportunities, though she was later quite memorable in Suspiria, Pennies From Heaven and My Favorite Year. Cartwright's nervous energy was put to great use in Invasion of the Body Snatchers, Alien and The Right Stuff; she's remained busy throughout her career. Davies appeared in director Byrum's subsequent films and a number of other TV shows and movies. Hoskins had his big breakthrough a few years later in The Long Good Friday.

Like other films initially rated X, Inserts received a change in rating; in 1996 it was re-rated NC-17. The Blu-ray from Twilight Time looks quite good, though bear in mind that this was a low-budget production, meant to reflect its 1930 setting. An isolated music and effects track is included, as well as the original theatrical trailer.

Inserts has long been a movie that I wanted to see. It's not at all what my fevered juvenile mind imagined it might be -- a skin flick comedy -- but instead proves to be a provocative disturbance that settles into a rueful battle of the sexes. Adventurous viewers will want to check it out.

* Correction: Per Swanarchives, Phantom of the Paradise shot in 1973, before Inserts. Further information here. We regret the error.

70s Rewind is a column that allows the writer to take stock of his favorite movie decade.

Do you feel this content is inappropriate or infringes upon your rights? Click here to report it, or see our DMCA policy.
Bob HoskinsJessica HarperJohn ByrumRichard DreyfussStephen DaviesVeronica Cartwright