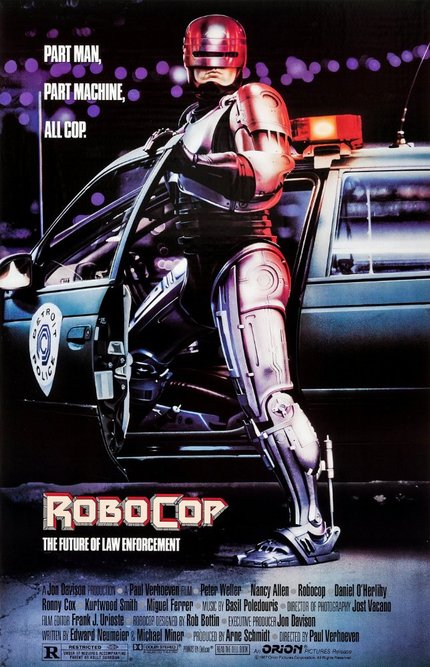 Gleaming as ever like some kind of well armed brushed-metal action figure, Paul Verhoeven's 1987 RoboCop continues to reflect striking truths amid daft action.

Although now considered a sci-fi classic, one can be forgiven for initially assuming a certain b-movie disposability about it. The premise sounds as hokey as it's title: Straight arrow police officer Murphy (a note-perfect Peter Weller), after transferring in to crime-ridden near-future Detroit, is promptly killed, then resurrected as RoboCop. "Part man, part machine, all cop!," as the famous tag line goes.

There is, of course, far more to it than that. Ideas of changing corporate culture, corporate takeover, media consumption, and humanity’s continuing intermingling with technology are thematically forefront. These notions are played with a dark humor and a smart satirical edge that have earned the film a continuing respectability amongst academics and film critics.

Recognition of its astute nature is nothing new. Scriptwriters Edward Neumeier and Michael Miner commitment to sending up 1980s excess was admired then, and alarmingly, it continues to be relevant today.

This came to a head recently when myself and others were led to take issue with a recent Vulture.com article that lead with the question “Has there ever been a movie more misunderstood than RoboCop?” (The short answer? Yes. Many. Consider Verhoeven & Neumeier’s own Starship Troopers, for one.) The Vulture story, while a solid appreciation why RoboCop still matters, misses the mark in coming at the film as something only now emerging as timely.

One thing, however, that I am grateful to the piece for, is the simple heads up that this is the 30th anniversary year of RoboCop. Time does fly, technology does surge, and inner cities continue to crumble. 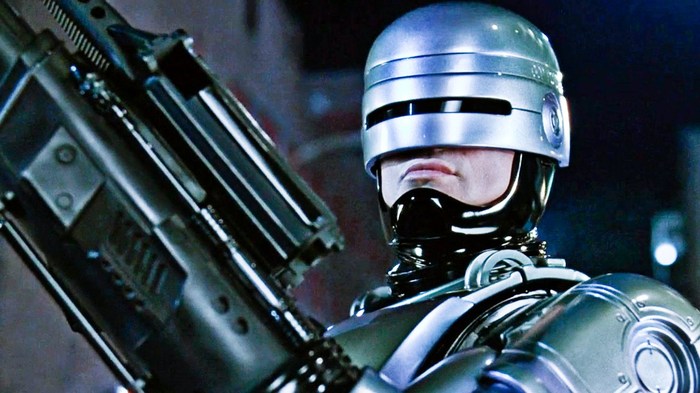 Through and around all of that, RoboCop is never afraid to be awesome. The shootouts, car chases, and raw caliber of the whole affair is never not visceral. In the action movie golden age that also gave us Die Hard, The Untouchables and The Terminator, it was easy to take RoboCop for granted. Yet, a mindful look at the pure pacing, staging and impact of it all reveal a top flight blockbuster, deserving of its lofty reputation.

This is thanks primarily to the unrelenting direction of Dutch auteur Paul Verhoeven, who opted to make RoboCop his first American film. If Verhoeven, as equally competent as he can be problematic and provocative, is known by his work (which also includes Total Recall, Basic Instinct, Showgirls and Elle) for only one thing, that one thing must be his audacity. He realizes the crime-ridden retro-future motor city as something chronically askew, perpetually employing distortion lenses and odd angles.

The insanity of the world on screen is no doubt carried over from the insanity of the production itself. Behind-the-scenes production stills of Verhoeven at work depict him as no less than a man possessed. Whatever hell he put his cast and crew through, it paid off. RoboCop is Verhoeven’s greatest American film, and he knows it.

So, with all of that out of the way, we can get to the prime directive of this piece: How does the movie fare today, after having not seen it for over ten years? RoboCop, of course, remains fantastic; it's exceptional qualities all the more appreciated by my experienced film critic's eyes.

Although it's been more than a decade since I've visited Verhoeven's Old Detroit (actually Dallas), RoboCop remains one of my own most-seen films, and more of a gut-punching artistic influence than I realized for many years. It was also one of the first R-rated movies I ever saw. With a title like "RoboCop", it didn't occur to my parents that it would be hyper-violent, brutal, and more sweary than anything I'd experienced in my fairly sheltered life up to that point. Kurtwood Smith’s Clarence Boddicker (the actor doing his best Jack Nicholson) alone cleared that hurdle. Obviously, this was one movie we had to watch when they weren't around.

So taken was my eighth grade self with the whole concept that even before seeing it, I had directed my own sequel/remake in my basement, RoboCop 2: For the People Who Missed it Last Time. Shot in two days, we took my very game best friend (who had seen the movie), stuck him in a U.S. army helmet, a Lone Ranger mask, and wrapped him in eight feet of green medical foam, tied off with a "gun belt" rope. Even as a comically lumbering lime-colored tin can of sorts, I recall his performance as the title character being unflinchingly decent.

That said, 15 minutes of the exasperating 20-minute running time was devoted to a fight between our own ED-209, played by the neighbor kid under a quilt and a pith helmet, holding a broken chair on his back, it's for legs being cannons. The never-completed sequel would've been RoboCop 3: RoboCop Cleans Up Cleveland, in which our hero gets a transfer. Cleveland would be someone else's basement. Not soon after, the great TV series Sledge Hammer! had its own spoof, in which the Dirty Harry-esque lead gets transformed in “Hammeroid”!

To be honest, there was little question in my mind as to whether RoboCop holds up or not. Although it was remade only a few years ago (a movie I recall not hating at the time, but don’t care about, either), a simple mention of the title needs no clarification as to which version is likely being discussed.

What surprised me was just how it’s stuck with me. Days after revisiting it -- the recent restoration on MGM Blu-ray, served up in a steel case, thank you very much -- the film remains forefront in my mind. All over again, I’m bowled over by it. From the soaring Basil Poledouris score to the aching humanity of Peter Weller and his final line to the brilliant audacity of the final shot, one of the single greatest ending close-up shots in all of movies.

Stare closely at the fractal blue reflections emanating from the rebuilt Murphy at any given moment, and you’ll be blinded by the very specific playful madness that could’ve only happened there and then. All subsequent sequels, TV series’, comics and remakes (even mine!) have tried, failed, and have been swept away. The future of law enforcement is as heavy duty as ever, and then some.

In this case, Murphy's law may not abide by certain established directives, but that just what's kept it enforceable for 30 years.