The metallic clank of his feet. The whirling drill sound of his arms and torso twisting into motion. The stentorian command of his voice. Paul Verhoeven's RoboCop set a high standard for robotic law-enforcement officers back in 1987, a standard that José Padilha's new RoboCop will be hard-pressed to top when it expands into North America on Wednesday, February 12.

But Verhoeven's vision, based on a great script by Edward Neumeier and Michael Miner, and brought to life by a large team of talented craftspeople and an excellent cast, led by the great Peter Weller, was not the first time robotics and/or cops brought back to life played a role in providing law and order on the big screen. Our writers were eager to share their -- sometimes quite liberally interpreted! -- favorite robotic and/or resurrected cops. Click through to read our selections. 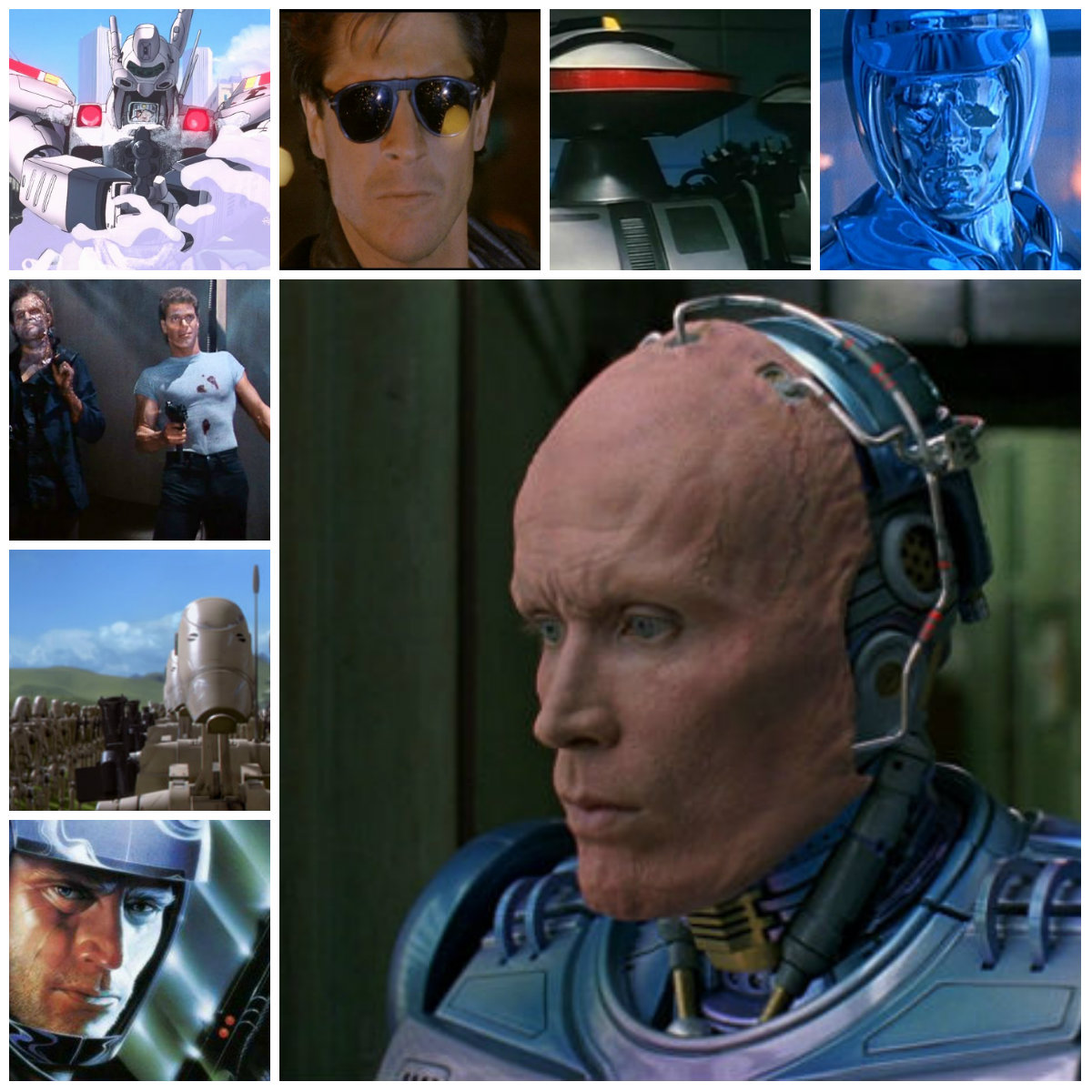 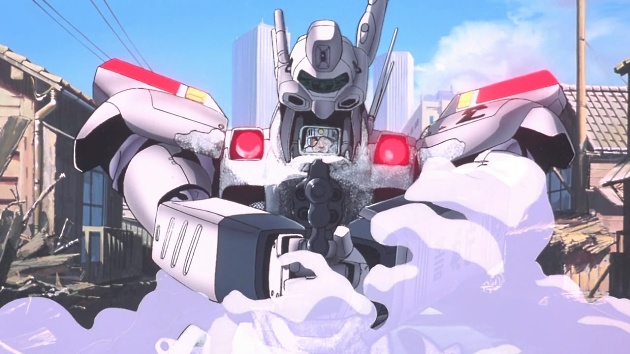 Oshii Mamoru's Patlabor stories (whether manga comic books, direct-to-video shorts, ongoing series, or cinema films) take place in an unusually realistic almost-current future Japan, in which huge building projects have led to the development and implementation of giant piloted humanoid bulldozers, called Labors. They are multi-functional, ultra-strong vehicles on legs. Problem is, what if someone would use a Labor to commit crimes? Police would be powerless as you'd need an army to stop a Labor. To solve this problem, the Tokyo police has a few specialized patrol Labors of their own. Patlabors for short. And they are awesome.

What makes the Patlabor universe so great is that while the vehicles are shown as being cool, Japan itself is not. The policemen piloting the robots are all on career dead-ends, seen by elitist politicians as unfit for regular duty, and the series often takes jabs at an apathetic society which, sometimes, needs to be saved by slackers and nerds. In big police robots, of course!

If we're talking robot cops, there is no getting around the T-1000. A super-robot made of millions of liquid metal nanodroids, the villain of Terminator 2: Judgment Day is able to mimic anything it touches. Strong enough to handle Arnold Schwarzenegger's T-100 in each mano-a-mano fight, it is a formidable foe indeed. Almost immediately after it arrives in our time to eliminate the boy known as John Connor, it dons the disguise of a policeman on a motorcycle, so it can investigate, speed-race and threaten with impunity.

During the film, the T-1000 changes into many things: a stepmother, an asylum guard, a life-size Oscar statue, a stretch of linoleum floor, ... but its default setting, and the one it will be best remembered for, is the motorcycle cop who looks like Robert Patrick.

Years before Star Wars became a feasible option, George Lucas had already made a science fiction feature. Basically a full-length version of his student-short, THX 1138 is a dystopian tale of drugged people living as emotionless cogs in a giant machine. It's a cross between George Orwell's 1984 and Aldous Huxley's Brave New World, and easily as bleak as both. Take your drugs and live as a productive drone with zero creativity, or do not take your drugs and... well, that's where the robocops come in.

Bigger and stronger than most humans, these anonymous policemen are quick to spot irregularities and bash opponents down with their staffs. What would a totalitarian state be without them? They make a formidable foe for Robert Duvall's character, and each one of them that is brought down gives a warm feeling.

There's no way around it, the Star Wars battle droid army sucked. They sucked almost as much as many would say the underrated prequel series (yes I said it) that persisted in featuring them sucked.

Their first task was to lock down planet Naboo, a place half occupied by Jar-Jar's people, and they couldn't even manage that. This is because battle droids were sucky by design.

It was a pretty good plan, really. Palpatine would use his secret Sith powers of persuasion and stealth to fool everyone into going to war with a trumped up and equally manipulated foe, the Trade Federation. He'd stock those galactic nincompoops with an endless supply of these inept birdlike buckets of bolts whose continuous defeats would generate a false Jedi confidence and lead to only more war. But that didn't happen until the second film, in which the Old Republic accepts delivery of a clone army they didn't order (and secretly ruled by Palpatine) and aren't sure who did.

In the meantime, Jedi get to chop their way through an endless string of battle droids, the neck-less super battle droids (much harder to decapitate) and the deadly destroyer droids, which are basically rolling mindless transformers (but still smarter than Michael Bay's transformers). They were all ultimately red herrings designed to suck. Mission accomplished, and roger roger! (“Hey, did anyone here order a clone army...?) 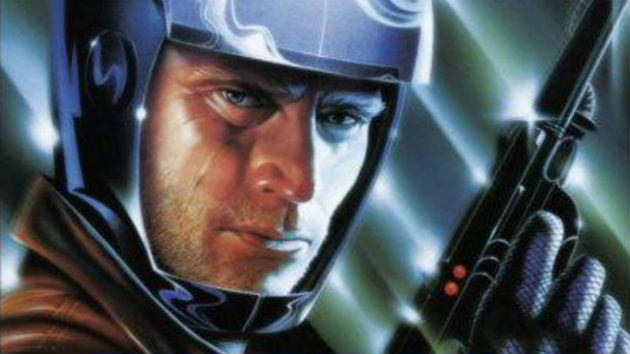 What’s better than a film about a time traveling police trooper from the year 2247 that leaps back to 1985? Nothing! That’s what! Add to the list that the mighty Charles Band directed the film and the fact it features an early performance from Helen Hunt and you’ve got yourself one hell of a cop film!

Trancers (aka Future Cop) spawned six officially released sequels (plus a ‘lost’ seventh sequel) and bustles with enough low-fi imagination to power a small city. Featuring Tim Thomerson as lead character Jack Deth, the narrative is an effective multi-dimensional cat and mouse game but has the added bonus of being a strange quasi Scanners rip off!

A true VHS shelf classic, this 79-minute opus features laser guns, a scooter chase that occurs down a stairwell and yes, did I mention that Helen Hunt stars as a punk rocker? This series is lying in wait for your next binge watch! 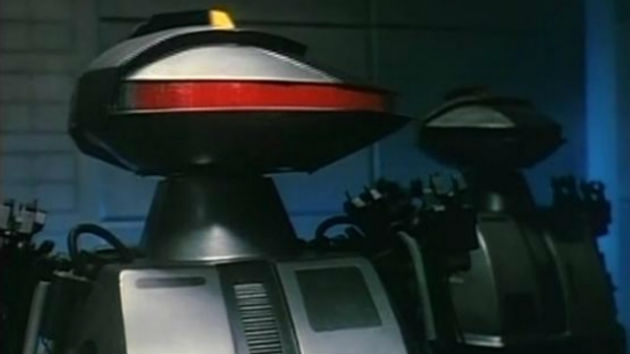 Legendary producer Roger Corman teamed up with B-movie hack Jim Wynorski for this epic cheese-fest, another in a long line of cheap 80s slasher films following the success of Friday the 13th. Only the villains here are pretty ineffective: clunky hunks of metal resembling trash compactors on treadmills, so slow you could outrun them hopping on one leg, which come with a built-in catchphrase (“Have a nice day!”).

More than anything, Chopping Mall is a time capsule of the decade of big poofy hair and leg warmers, a time when malls were the preferred hangout spot and you’d spend hours lounging at a food court or pumping quarters into a Pac-Man machine. It’s enough to bring you back, and if not, there’s always that irresistibly catchy synth score.

This is a fun time filled with cornball lines like “Let’s send these fuckers a Rambogram” or the greatest pick-up line ever, “You smell like pepperoni. I like pepperoni”. It’s goofy and features the most impractical security system ever seen; where’s Paul Blart when you need him? 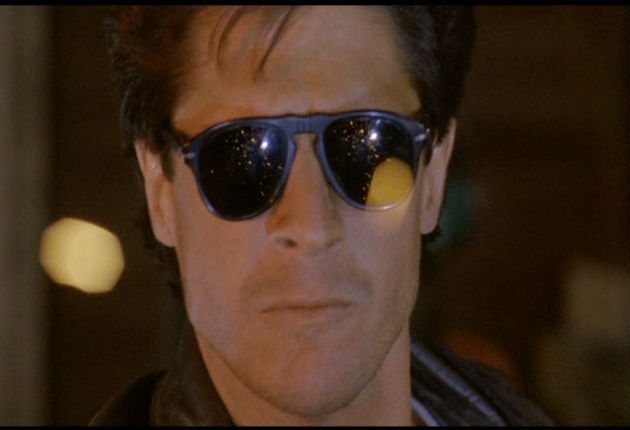 David Bradley reprises his role as Jack Ryan (not a shadow recruit) in the sequel and has to jump-kick and shoot a whole bunch of new cyborgs, this time a gang of them led by a crazed drug-dealing murderer named Starkraven. Shortly after he's taken off death row by the US government and transformed into a cyborg, Starkraven leads a violent cyborg uprising with hopes of taking over the world and enslaving any humans they don't kill - but Jack Ryan's having none of that.

The cyborgs talk with silly automated voices and have bizarre sound effects added not only to their footsteps, Robocop-style, but even their eye movements. As well as terrible effects, there's some ghastly scripting, a little gratuitous nudity, dozens of explosions, and thousands of bullets fired. If you like the sound of a poor man's Robocop that plays like a Cannon Films wannabe, you'll dig Cyborg Cop II. 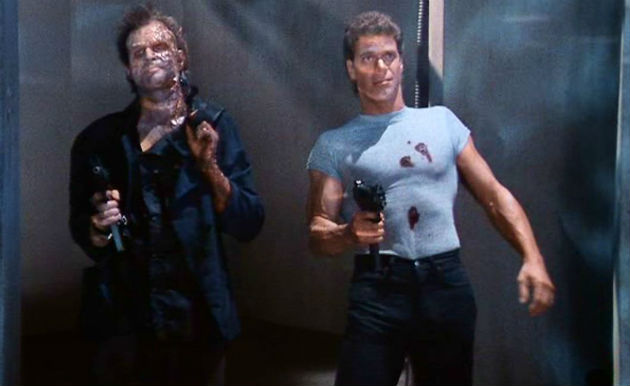 Coming across as a bit of D.O.A. for the living dead set, 1988's Dead Heat is one of the odder entries in Treat Williams' career (and part of the overall oddity of buff SNL alum Joe Piscopo's career). The film sees L.A. police detective Roger Mortis (Williams) and his wisecracking partner Doug (Piscopo and muscles), investigating shady goings-on at Dante Laboratories, which seems to have a thing for bringing the dead back to life. Before you can say "George Romero," Mortis is killed (and resurrected) in the line of duty, using his newfound ability to survive grievous bodily harm (and continued decay) to go after his killers and take down Dante Labs.

Featuring an amiable pairing between its two leads, and one of the final onscreen performances of the great Vincent Price, Dead Heat is a strange and fun twist on the buddy cop formula, and really should have been the movie to get remade. 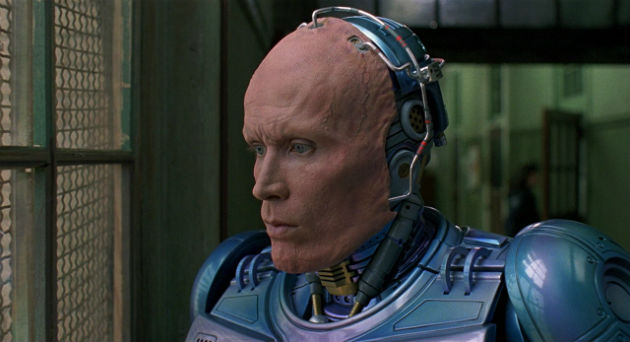 Multiple celebrations of the 25th anniversary of the film's release were held in 2012, and I was very happy to be able to attend the one held at the Texas Theatre in Dallas, as part of the Dallas International Film Festival.

Peter Weller was in attendance for the packed screening, along with his young son, who was seeing the movie for the first time. I've seen the movie multiple times, but never on the big screen with hundreds of people reacting viscerally to the action. Weller's exquisitely-modulated performance really hit home, not only because he was present, but because the pathos he generates was even more evident to me on a big screen, without the distraction of seeing the big action set pieces -- which still play quite splendidly -- for the first or second or third or fourth times.

Afterwards, the panel discussion with writers Edward Neumeier and Michael Miner, as well as executive producer Jon Davison, and Weller, dug deeply into the film's themes. (Here's a good recap.) And the film pushed itself even further into my subconscious, a memory that will never be easily dislodged.