Review: A PATCH OF FOG Dramatizes the Discomfort of Strangers

Stephen Graham and Conleth Hill star as two men locked in an unlikely battle in the strangely compelling A PATCH OF FOG, directed by Michael Lennox. 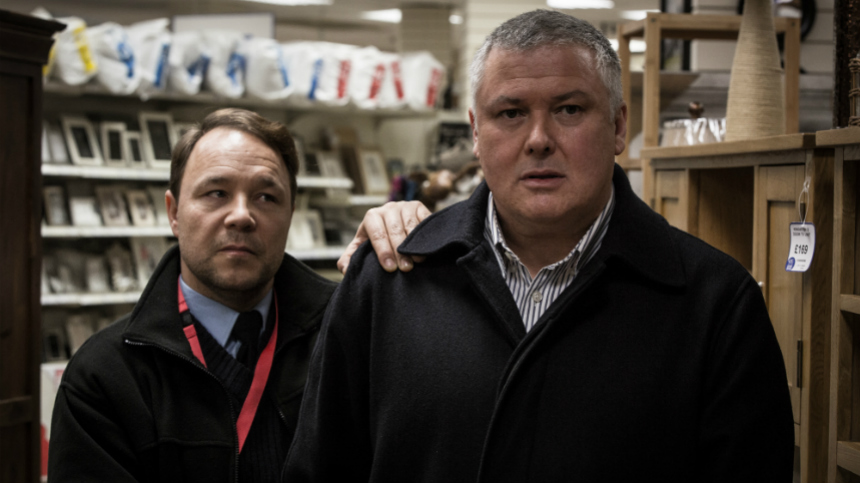 Exhausted by the travails of celebrity, a writer wants to retire.

This in itself is a strange proposition. Writers want to write -- need to write -- and the idea of retirement is usually only entertained by those who are suffering from an illness of some sort, or long-term writer's block.

In a sense, though, Sandy Duffy (Conleth Hill) is suffering from a sickness of the soul. His one and only novel, A Patch of Fog, written when he was only 25, became immensely popular and has remained in print. A 20th-anniversary edition is on its way, and Sandy's publisher Freddie Clarke (Ian McElhinney) wants him to do a book tour.

Yet Sandy protests that he is tired of all the hubbub about the book; he never wrote another and is now a professor at a local college, as well as the co-host of a weekly television show on the arts. He and his co-host Lucy (Lara Pulver) have begun a relationship and he wants that to work. He lives in a comfortable, luxurious home. What more could he want?

Sandy is afflicted with kleptomania, prompting him to perform sleight of hand tricks to steal small items from time to time. One night, however, he is caught by a security guard named Robert (Stephen Graham), and ends up locked in an unlikely battle with him. 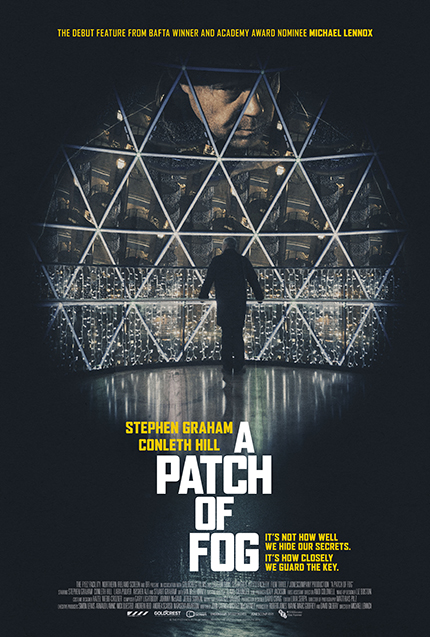 Robert is a creepy fellow with a big, fake smile. His only friend is his pet snake. He holds recorded evidence of the crime at bay in order to blackmail Sandy into becoming his "friend." Recognizing that Robert is not exactly a balanced personality, Sandy tries to walk a thin line between appreciation and outrage. He is not entirely successful, and that leads to a series of tense confrontations between the two.

Director Michael Lennox received an Academy Award nomination for his live-action short Boogaloo and Graham. In his feature film debut, he establishes a gloomy, moody atmosphere, beautifully captured by cinematographer Matthis Pilz. Dread and doom are palpable; we're always waiting for the other shoe to drop, for the worm to turn, and for other cliches to be played out.

The original screenplay by John Cairns and Michael McCartney is also the first feature credit for both. It aims to go against conventions and to upend expectations, and it's partially successful on both scores.

Neither Sandy nor Robert are typical leading characters. Unhappy with their lot in life, each man strives to be happy without knowing, exactly, what that is. As the story develops, Sandy must confront his past and Robert must acknowledge his future; neither is a pleasant prospect. Both Conleth Hill and Stephen Graham were unfamiliar to me, apart from their roles in Game of Thrones and Boardwalk Empire, respectively. but their performances here certainly show their depth of experience.

Admittedly, it's not easy to watch a movie that revolves around two resolutely unhappy characters. Their relationship illustrates the discomfort of strangers and is strangely compelling.

The film will be released on VOD and iTunes on Tuesday, January 24 via XLrator Media.

Do you feel this content is inappropriate or infringes upon your rights? Click here to report it, or see our DMCA policy.
Conleth HillMichael LennoxStephen Graham

More about A Patch of Fog

Stephen Graham is amazing. That is all.