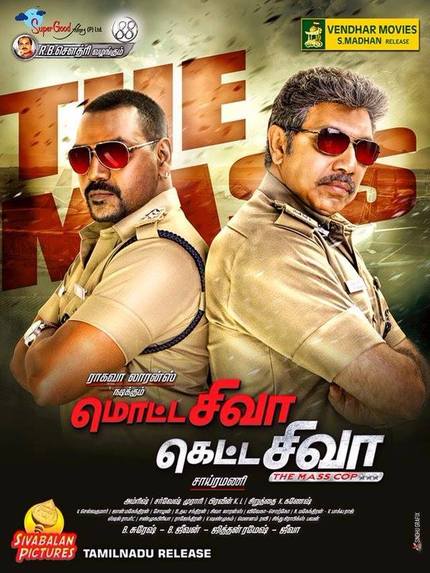 Tamil film star Raghava Lawrence has become one of my favorite performers since his insane ghost story Kanchana released back in 2011. For that film he served not only as the star, but he also wrote, produced, choreographed, and directed an incredibly fun and unblieveably bonkers action comedy ghost revenge musical that must be seen to be believed. In the years since he's starred in a few films, including the sequel to Kanchana, the disappointing Ganga, but few have reached the level of madness and fun that Kanchana did.

Well, I have another Lawrence film to look forward to, and this trailer does set mind mind at ease that he isn't toning down one bit. Motta Shiva Ketta Shiva features Lawrence as a cop who doesn't take any shit and beats people to bloody pulps when he's not busy dancing his ass off. I don't think it's going to be quite as "out there" as Kanchana was, but they've certainly not bothered with pesky things like physics in the action footage shown in the new trailer, so I'm a happy camper.

I have no idea what the film is about, but I can see from the trailer that it appears to be following some of the well trodden roads blazed by decades of Tamil masala entertainers, and that's just fine by me.

If you have never seen a man punched so hard that he flies through the air and lands on a car that then explodes, allow Lawrence to remedy that deficiency in your life.

Do you feel this content is inappropriate or infringes upon your rights? Click here to report it, or see our DMCA policy.
indialawrencemotta shiva ketta shivatamil