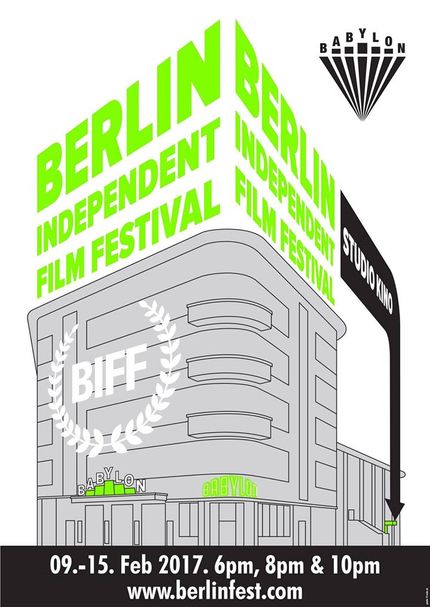 Screenings at 6pm, 8pm & 10pm every night at Babylon and cost 8 euros per show.

All films are in English, German or in original version with English subtitles.

All Berlin Independent Film Festival screenings take place at the Babylon in Berlin Mitte mid-February and cost 8,- euro per screening. Fantastic premieres of feature-length and innovative short films from a wide spectrum of genres are exhibited over three screenings per evening.

BIFF  screen multi-genre features & shorts, documentaries & music videos of exceptional quality, selected to compete in individual genre categories for best film. BIFF aims to give filmmakers global visibility and to meet colleagues and an informed Berlin audience attracted to the film scene of this city. Hosting this festival, the Babylon cinema is a cultural institution at the very heart of the theatre, art and nightlife district of Mitte.

BIFF takes place at the Babylon Cinema in downtown Berlin. As well as a offering plenty of screening opportunities for indie films, BIFF is developing into a crucial business hub for the low-budget film industry. BIFF hosts workshops and networking social events where attending filmmakers help each other out with marketing advice and EFM tips.

BIFF has been successfully attracting visitors and participants since 2009 and has become an international hub for indie filmmaking. BIFF showcases premieres of brand new narrative films juxtaposed with long and short form documentaries and experimental films in guaranteed quality low-budget short film blocks in all formal categories by international as well as european filmmakers. The festival awards prizes to nominees in various genre categories. There is a parallel screenplay competition.

With an emphasis on showcasing new filmmakers achieving great things with tiny budgets, BIFF’s exciting programme of films and events combines a commitment to indie filmmaking ideals with a solid understanding of their potential in the marketplace.

As well as a offering plenty of screening opportunities for indie films, BIFF is developing into a crucial business hub for the low-budget film industry. Check out last festival's quality multi-category programme, always in English and German or with English subtitles to appeal to the broadest international audience of industry types, foreign visitors and cosmopolitan Berliners. Actress Claudine Biswas-MacKenzie hosts this event. Opening Night at Griffin Bar, Invalidenstr. 151, Berlin-Mitte on February 8th.

Awards in the following categories:

Check out this fbook feed for updates, trailers & programme: