Review: JULIETA Abandons the Drama for the Mellow 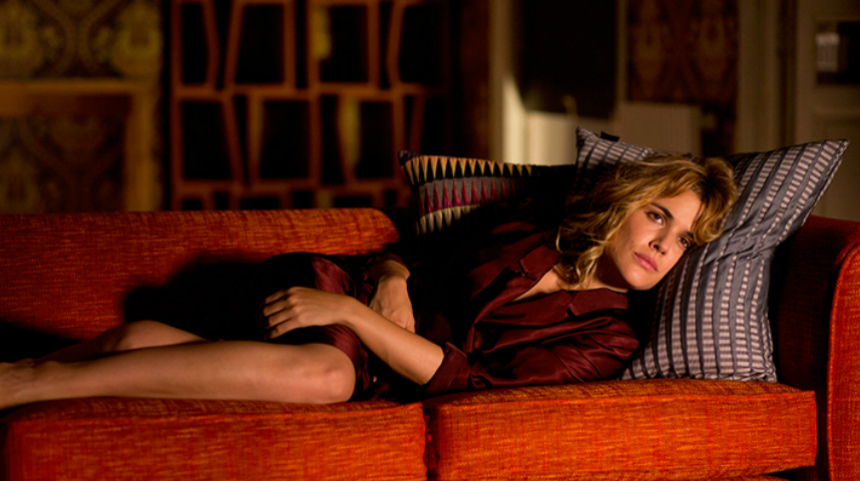 Alfred Hitchcock once said, 'Drama is life with the dull bits cut out'. To twist that a bit, Pedro Almodóvar's new feature film Julieta is a slice of life with the drama cut out.

The story of one woman's journey through life, love, motherhood, and grief, it sadly lacks any great new insight into these states, nor does it follow through on the few intriguing narrative twists it does offer. Almodóvar may once have lay claim as Spain's answer to Douglas Sirk, but in this new film, he has abandoned the drama for the mellow, or perhaps more accurately (as Hitchcock would say), the dull.

Julieta (Emma Suárez) is about to move to Portugal with her partner Lorenzo (Darío Grandinetti) when she runs into Beatriz (Michelle Jenner), the childhod friend of Julieta's long-estranged daughter Antía. Visibly shaken, Julieta returns to her flat, abandons her move, and proceeds to write a letter to Antía, telling her the story of her father, their romance, and the subsequent entanglements and disasters, hoping for a long-awaited reunion.

Throughout the film, there are moments that could have made this into a melodramatic thriller, much like some of Almodóvar's earlier films Matador and The Law of Desire. When we meet the younger Julieta (Adriana Ugarte), she is on train trip, where a man she brushed off commits suicide, and she begins to blame herself. But that mystery is abandoned in favour of the love story and her first night with Antía's father.

Fair enough, but when a few months later she shows up at the house of her lover, there is a strange Mrs. Danvers-vibe with the housekeeper (Rossy de Palma); that story arc too is abandoned, in favour of Julieta's inner monologue about her love-striken heart. Later, an affair is revealed, a dramatic death occurs, and still, we are trapped inside Julieta's ramblings, which provide little drama and almost no momentum. As the story shifts to Julieta's relationship with her daughter, both its strength and ultimate weakness are never explored, leaving little room for sympathy for the main character. 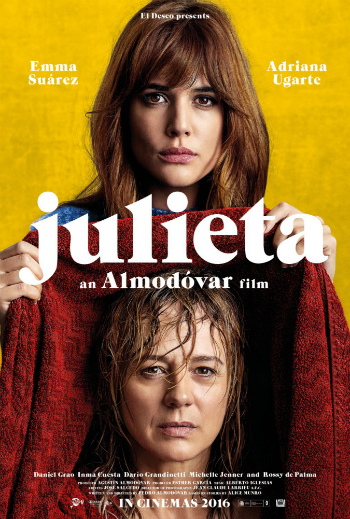 Almodóvar adapted his screenplay from work by Alice Munro, one of the great short story writers of our time (she won the Nobel Prize in 2013), and a personal favourite of mine. Her stories are quiet, insular, ambiguous, in which actions and inner thoughts are laid out without flair, and emotion is contained beneath a thin surface; often nothing exactly 'happens' in her stories, but they are tales that creep up on you.

It's no fault of the actors; Ugarte and Suárez fit perfectly into the Almodóvar mould, but they are given little to do except look either beautiful or depressed, with no chance to create a deeper or richer character arc. And certainly, the film looks beautiful; it is unmistakably the Spanish auteur's work, with red, oranges and yellows on prominent display, with art and literature as a focal point for themes of love and loss.

One of the key points to remember in film, something that Almodóvar seems to have forgotten, is that it is better to show than to tell. Any of the dramatic turning points above (and a few others besides, with the best left and abandoned in the last few minutes of the film, but I will hold back on spoilers) could have been used both to spice up the film and to show how Julieta changes and grows. His masterpiece, All About My Mother, is a perfect example of this, how you can have both dramatic events and characters whose identites are revealed and adapted through those events.

But Almodóvar seems to have lost all sense of what makes interesting drama and character development. This might be an attempt to muse on one woman's depression and loneliness, but what works on the page does not always translate to the screen, and Almodóvar seems content to let his past strengths wither in favour of banality.

Review originally published during the Cannes Film Festival in May 2016. The film opens tomorrow in select theaters in New York and Los Angeles and will then expand to other cities in the coming weeks.

Do you feel this content is inappropriate or infringes upon your rights? Click here to report it, or see our DMCA policy.
Adriana UgarteAlice MunroEmma SuarezJulietaPedro Almodovar