Now on Blu-ray: Film Noir for the Holidays From Kino Lorber Studio Classics

There's nothing like a nice, smoky film noir to keep you warm over the holidays. In recent weeks Kino Lorber's Studio Classics line has released a number of classic noirs on Blu-ray that are definitely worth your attention. Many of these films were previously available as part of the excellent Fox Film Noir line that helped bolster my collection about a decade ago.

Kino Lorber's new presentations of these films bring them boldly into the 21st century with great transfers and a combination of new and archival bonus material that any lover of film noir will definitely appreciate. Continue reading below for more details. 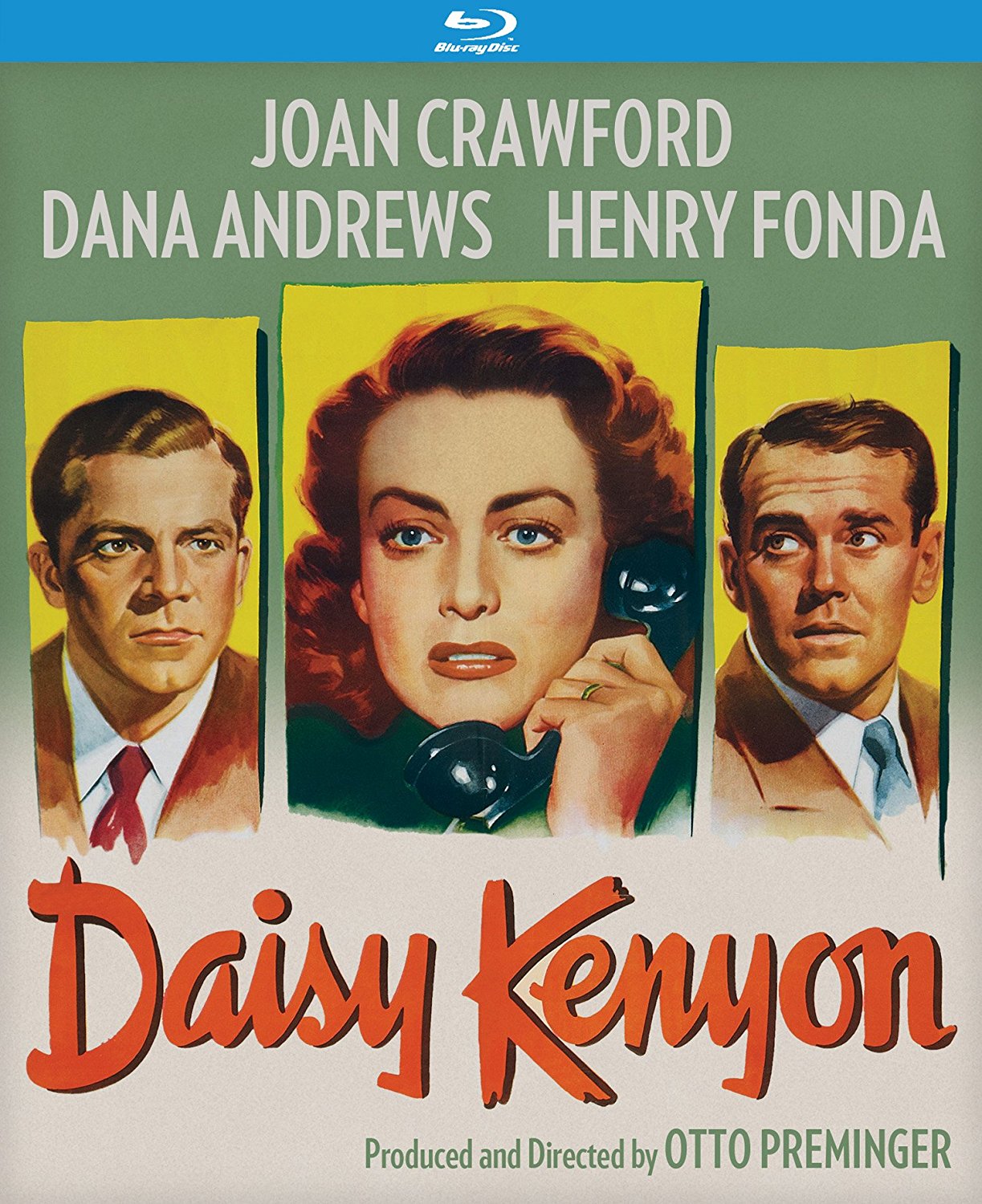 I ordered this list roughly from top to bottom, and Daisy Kenyon - while questionable as a film noir - is most certainly my favorite of these films. A large part of my enthusiasm for the film is reserved for the performance of one of my favorite actresses, the inimitable Joan Crawford. Her portrayal of the titular Daisy is one of fierce defiance toward the social and sexual mores of the time. There's a reason it's her face front-and-center on the poster, Daisy Kenyon belongs to Joan Crawford.

Daisy Kenyon is a working commercial artist torn between two lovers. Her heart belongs to the philandering Dan O'Mara (Dana Andrews), a married attorney with whom she's been carrying on an affair for some time. Her head, however, is trying to steer her toward military man, Peter Lapham (Henry Fonda), a sweet, fawning wisp of a man who falls instantly in love with this woman he cannot have.

As Daisy wrangles her emotions in an attempt to make the right choice, her two options grow increasingly unstable in their attempts to claim her as their own. However, she is no man's property and the men's machinations to wrest her from the hands of the other lead her to her own truth.

Otto Preminger's (Laura) Daisy Kenyon is a startlingly bold film coming from the late '40s. Daisy's control of her own destiny and sexuality while attempting to juggle the affections of two different men comes off as proof that she is a woman to be reckoned with. However, at no point does she surrender her femininity or grace while faced with this choice, she is the master of her own life, and the film presents her as such without submitting her to more demure stereotypes that would have weakened her.

Daisy Kenyon marks a modest upgrade in A/V quality from the previous DVD edition. The black and white cinematography looks wonderful, however, the transfer does show damage at numerous points. None of the damage is extreme, however, it's clear that the film hasn't been cleaned up. In terms of sharpness and clarity it wavers throughout the film, largely due to the beauty shots of Crawford, which cover the image in a vague vaseline glow.

Several archival featurettes appear on this disc discussing the history of film noir at Fox and the production with stars of such high caliber. Crawford, Andrews, and Fonda were all a handful separately, but together they were even more trouble. Add to that mix the dynamic and often volatile Preminger and it was surely a lively set.

I love Daisy Kenyon, and barring some miraculous restoration this is certainly the best edition of the film on home video for some time to come. 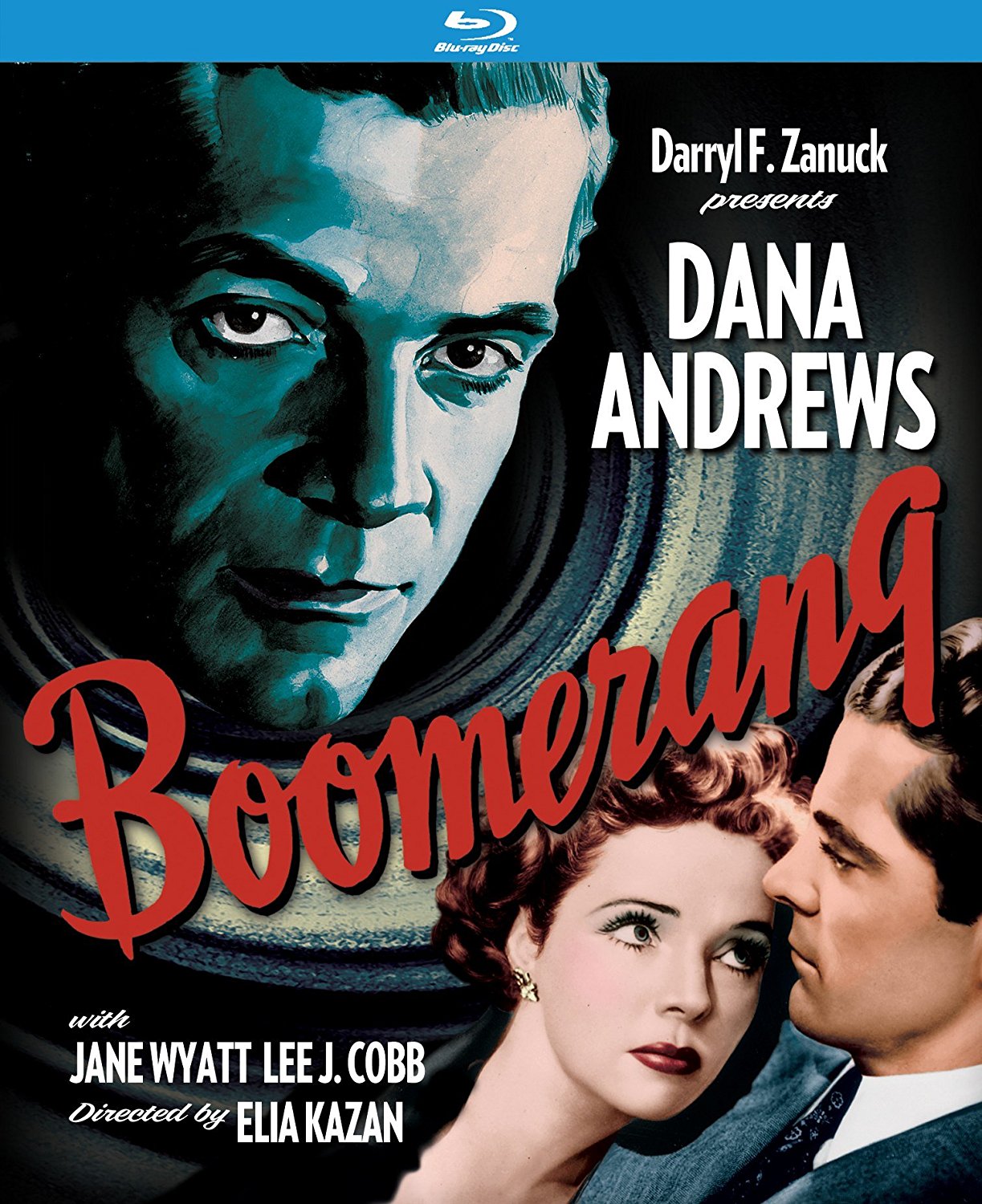 Noir mainstay Dana Andrews also anchors Elia Kazan's Boomerang, a story about a dead priest and the hunt for his killer.

When a small town priest is murdered in the street in broad daylight, it falls to Henry Harvey (Andrews) to make justice happen before he's drummed out of town. Local police chief Harold Robinson (Lee J. Cobb) narrows the suspects to two, one who denies and one who confesses. There's something not quite right about the whole thing, though, and Harvey's determined to sniff out the truth if is kills him and costs him his career.

Director Kazan's (On the Waterfront) second feature clearly lays out his formula for a very impressive career. Not satisfied creating mere potboilers, Kazan takes a deeper, more socially conscious look at his subjects than many, and the result is a wonderful film that takes its time arriving at a conclusion that continues to shock, even today.

Boomerang is another film that could use a bit of restoration, but its HD upgrade is pretty good. The film was previously released on Blu-ray in the UK by Master of Cinema, and their disc looks similarly dingy, but not to the point of distraction.

From Kino Lorber we get a pair of commentaries and unfortunately none of the featurettes from that Master of Cinema disc. The two commentaries here, one by Imogen Sara Smith and the other Alan Silver and James Ursini, are of good quality. The latter appears on the UK MoC disc, while the former is new and while academic, is a bit less dry than the other.

If you're locked to region A for Blu-ray discs, the Kino Lorber is a solid choice, however if you are able to play region B Blu-rays, I'd probably stick with the Masters of Cinema option. 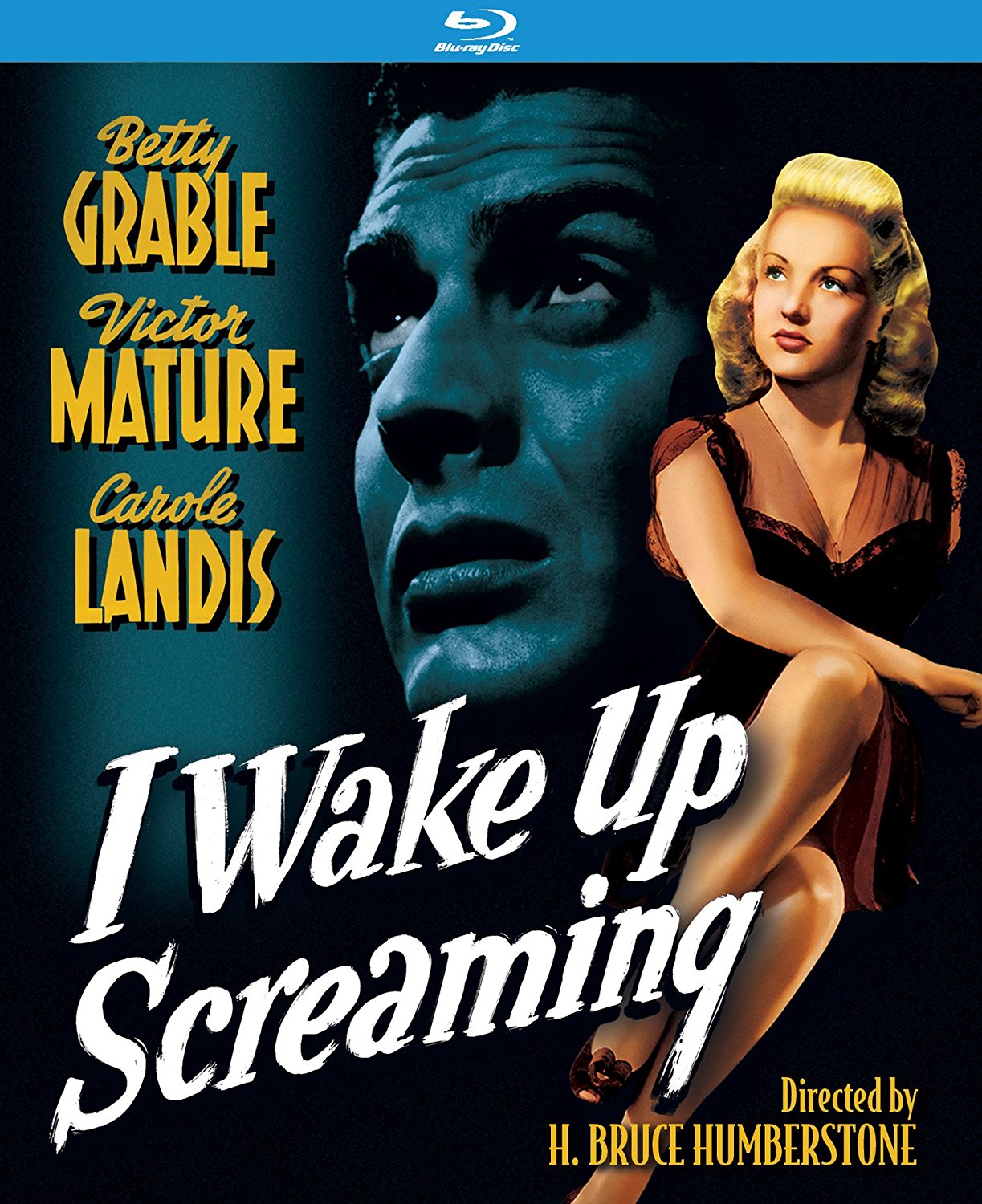 Another of the most iconic faces of film noir is Victor Mature. His performance as an accused murderer in H. Bruce Humberstone's I Wake Up Screaming is one of his most intense. The film doesn't do a lot for me as a whole, but Mature is always gripping to watch, even if you just want to punch him in his smug little face most of the time.

Mature plays promoter Frankie Christopher, a sports promoter who is a suspect in the murder of an up and coming fashion model he helped make famous. Frankie takes up with the model's sister Jill (Betty Grable) and quickly begins falling in love with her. This romance seems a bit too convenient for the cop working the case, Cornell (Laird Cregar), and his leans on Frankie relentlessly. The only way out is to find the real killer and now Frankie's on the case.

Again, the film is definitely entertaining, but it lacks the edge of Boomerang or the social conscience of Kenyon. Victor Mature puts in a great performance as the man on the run, but I was left wanting more tension and edginess. This still ranks decently among second-tier noir, but I wish there was more meat on these bones.

Another moderate HD upgrade from Kino Lorber. The image quality definitely advances in terms of overall clarity and detail as well as treating the film grain with respect, but it's not a mind-blowing difference. The audio is similarly effective, but not outstanding.

Film Noir expert Eddie Mueller's commentary from the 2006 Fox DVD is ported over to this new release, and it's a good one, definitely recommended listening. 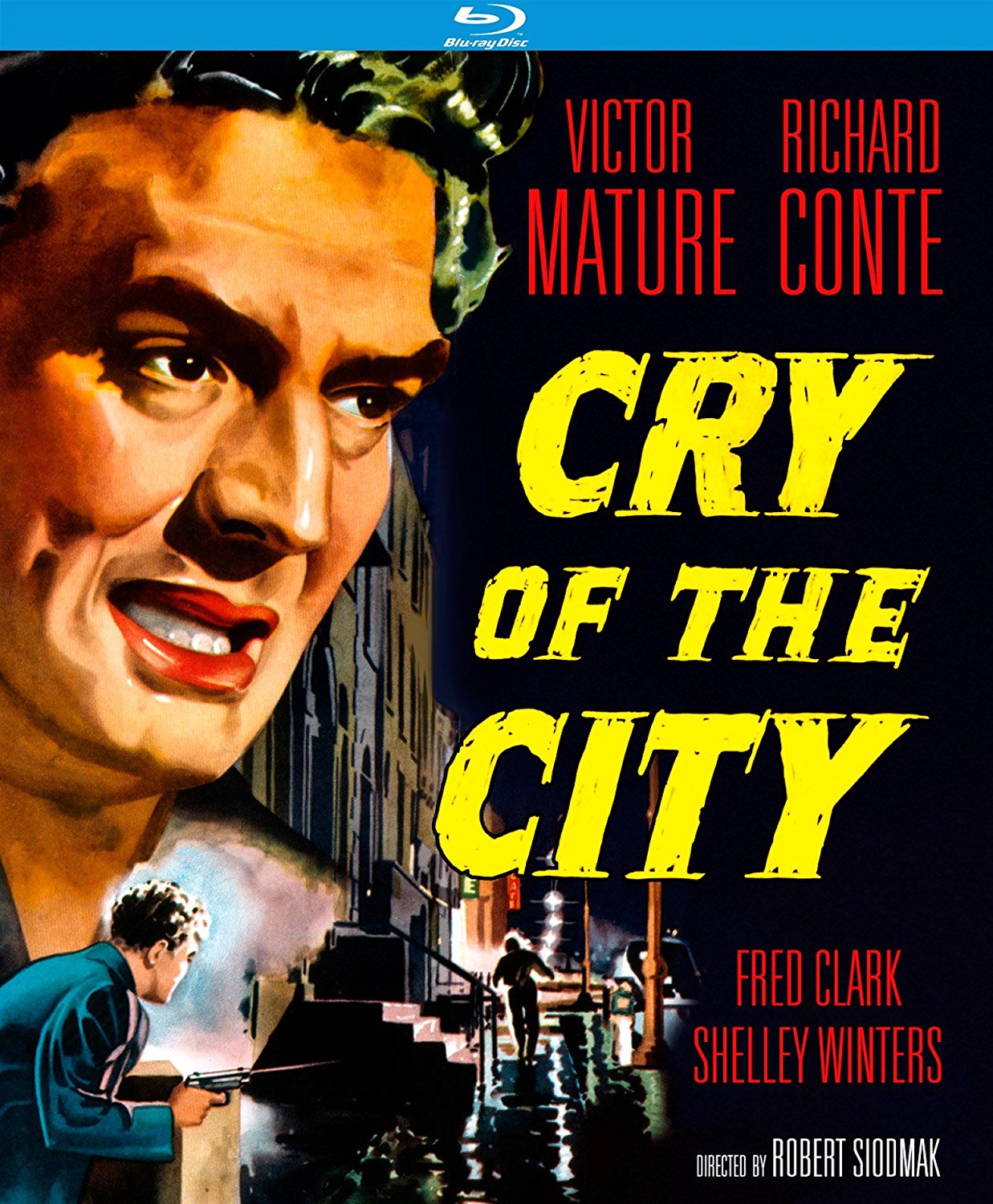 Victor Mature again stars in Robert Siodmak's Cry of the City. Based on the pulp novel The Chair for Martin Rome, Mature and Richard Conte face off in the tough streets of New York in one of the grittier entries on this list. Siodmak, the underappreciated mastermind behind films like The Killers, keeps the action moving while Mature and Conte make for an entrancing duo or killers, one for the law and one against.

Martin Rome (Conte) is a career criminal recuperating in the hospital after a shootout that leaves a cop dead. With the help of some friends he escapes and is immediately pursued by his old foe, Candella (Mature), who knows him and the streets he grew up on. As Rome attempts to flee from Candella, each of the arch adversaries drags his own loved ones into the fray, causing plenty of collateral damage in this hard-boiled story of crime and how it doesn't pay.

I liked Cry of the City quite a bit, even if Victor Mature still has one of those faces I'd just love to punch. Richard Conte doesn't make too much of an impression, but his contentious relationship with Mature makes for good viewing.

Cry of the City is another Kino Lorber HD upgrade that is modest at best. Minor damage and flickering contrast are the biggest issues with the HD transfer, but not enough to steer me away from a recommendation. If you're a fan, this is certainly worth the cash.

Another commentary by Noir expert Eddie Mueller is a must, definitely a pro in this disc's kitty. Definitely recommended here. 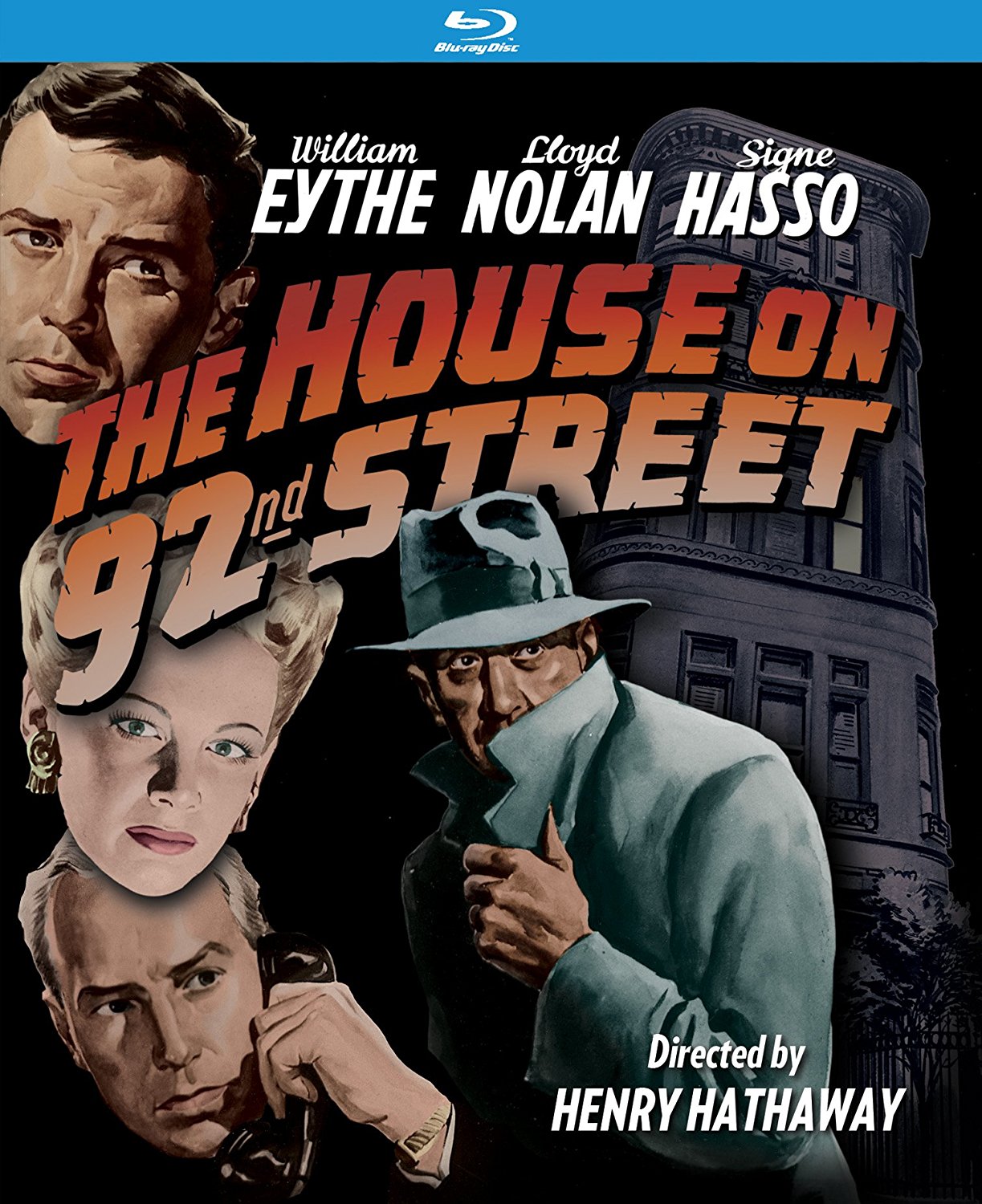 The House on 92nd Street is definitely my least favorite of this bunch. This WWII thriller about Nazi sympathizers in the run-up to that great conflagration feels a bit too much like an extended news reel to capture the imagination. It doesn't help that the film acts like a news reel at every opportunity, interrupting action with voiceovers and cheesy inserts rips all of the dramatic tension from the movie. A true story may be the origin of this film, but they really could've afforded to take more artistic license.

Director Henry Hathaway (Niagara, How the West was Won) tells this true life story of espionage in the days leading up to the US's involvement on the Eastern front in World War II. This story, which tells how German recruiters in America attempted to steal US secrets - in particular the plans for the atomic bomb - is one that should be a nail biter, even though we all know how it eventually ended. Unfortunately, the method by which the story is told ends up hijacking the narrative and it becomes more about style than substance.

The House on 92nd Street looks fine on Blu-ray, and "fine" is likely as good as we're going to get with a second tier noir like this, so I am satisfied. It's a definite upgrade from the Fox DVD.

Eddie Mueller again contributes a commentary, which is most definitely more engaging to me than the actual film. Thank you, Mr. Mueller, for brightening up this experience.