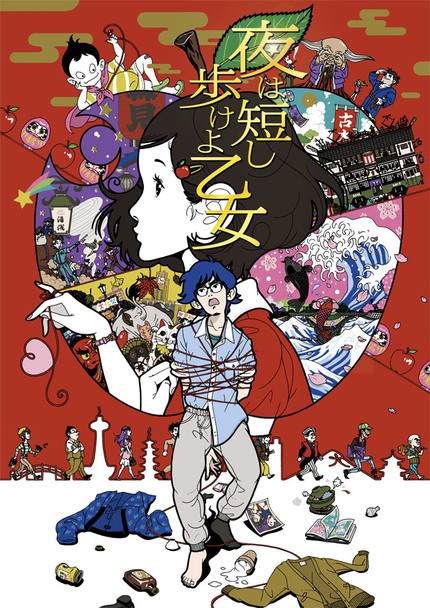 While Japanese animator Yuasa Masaaki - one of the most distinctive talents in the animation world - has been very busy over the past decade with acclaimed series such as The Tatami Galaxy, Ping Pong, Kaiba and Kemonozume to his credit along with a guest stint on Adventure Time, it has been a shockingly long time since his work has been seen on the big screen. Yuasa's most recent big screen outing was as part of 2007 anthology project Genius Party while his only true feature to date remains the hugely acclaimed Mind Game. So fans will be pleased to know that Yuasa returns to the big screen in 2017 with Kurokami no Otome.

Produced by Yuasa's own Science Saru studio, this latest effort reunites the director with Tatami Galaxy author Morimi Tomihiko as well as Nakamura Yusuke, who was responsible for the character designs on that previous Morimi adaptation. Yuasa has always been one of the most visually restless directors out there, with his style shifting significantly from project to project - change is really the only constant in his work - and that remains true here with the striking visuals not really resembling anything else in the current anime scene.

Take a look at the first teaser below!