Blu-ray Review: A MAN CALLED OVE, A Grumpy Old Man Who's More Than That 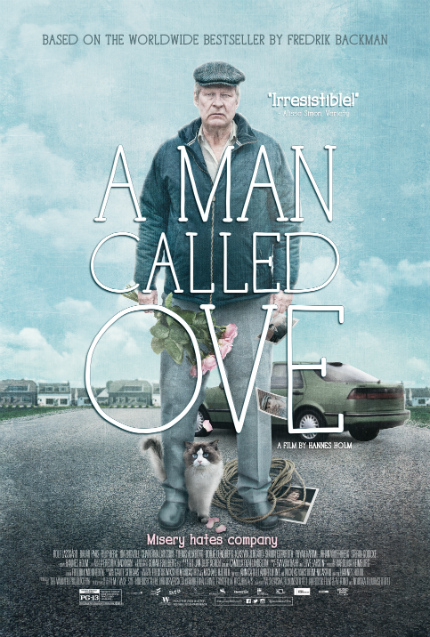 I laughed, I cried, I cheered.

Granted, I'm just an old sap, and Hannes Holmes' big- screen adaptation of Fredrik Backman's popular novel En man som heter Ove -- out today on Blu-ray and DVD from Music Box Films -- is shamelessly sentimental, especially if you have grumpy old men in your life. (Or recognize those qualities in your own personality, no matter your age.) Yet beneath the comic bluffing, authentic personalities seep through.

Now 59 years of age, Ove (Rolf Lassgard) has no reason to live. His beloved wife Sonja has passed away and he is determined to join her by killing himself. When he is informed that he will be relieved of his duties as a safety inspector at the factory where he has worked for decades, he abruptly quits and heads home to hang himself.

But as he has the noose around his neck, new neighbors Parvaneh (Bahar Pars), her husband Patrik (Tobias Almborg), and their two young daughters move in, and his plans are delayed. Ove is well-known in his gated community for his intemperate behavior and insistence that everyone adhere to the regulations.

His daily visits to his wife's grave reveal the depth of his grief, expressed through his angry grumbling to one and all. Just when it seems that Ove has reached the point of no return, the film kindly rewinds to his youth, and begins to unwind his personal history. He wasn't a grumpy young man, but he did manifest certain traits that made him unique.

When he grew older, young Ove (Filip Berg) met Sonja (Ida Engvoll), a breath of fresh air who was attracted to his modesty and reliability and loyalty, and accepted him for who he and what he was, and they melted together. These scenes are, in most respects, a romantic fantasy, but what memories of happy past loves are not?

Contrast those nostalgic dreams with Ove in the modern day, as a cold and bitter old man who is haunted by his past and shuts out the present.

Until Parvaneh comes along, a pregnant mother from the Middle East who shows him kindness and reminds him of what it means to have a family. Parvaneh already has his hands full -- her husband Patrik is loving but not the most capable kind -- yet it's not within her constitution to ignore the sad, grumpy, unpleasant old man living across the street.

Shot through with humor, A Man Called Ove is equally filled with memories and yearning and romance and family. It's handled with subtlety and grace by writer/director Holm and the actors, and becomes a moving meditation on loneliness and the challenges of daily life, no matter your age or situation. 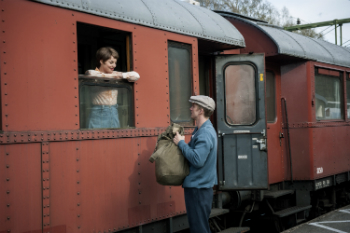 The picture looks perfectly fine, as good as expected from a new release. Cinematographer Göran Hallberg captures the action in a crisp, colorful and restrained manner. Everything looks quite natural, both the modern-day scenes and flashbacks.

The extras are led by The Ove in Us All: A Talk with Hannes Holm, Rolf Lassgard and Bahar Pars, a 14-minute feature built around interviews with the director and two of the actors. Director Holm explains how he came to the project and his approach with adapting a best-selling book, while the actors talk about the motivations for their characters. Pars also talks about the rare opportunity to portray a Middle-Eastern woman who is not a terrorist, and how she aimed to bring authenticity to the role.

Director and Cast Q&A at Scandinavia House NYC: Hosted by John Anderson in September 2016, this live, 21-minute Q&A session features the director and actors as they cover a few of the same points as in the extra above. But there's much more than that in this friendly chat, as Lassgard and Pars talk about how they first met (not on set), the cat, and more spoiler-ish subjects.

Makeup Gallery consists of 19 photo stills, showing the makeup work done for Lassgard to play his role. Makeup Time-lapse shoots through the daily process of application and removal in less than a minute.

This Blu-ray edition of A Man Called Ove is highly recommended. It's available via Music Box Films.

Do you feel this content is inappropriate or infringes upon your rights? Click here to report it, or see our DMCA policy.
Bahar ParsEn man som heter OveHannes HolmesRolf Lassgard

More about A Man Called Ove