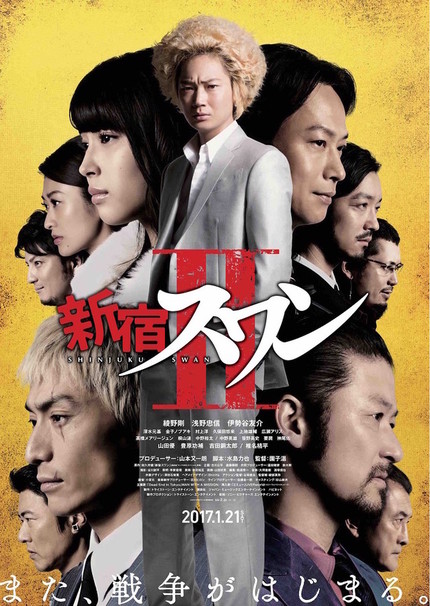 While it's a bit tough to pick either side of a film pitting rival recruiters for the adult entertainment industry and label that one side as the villain of the piece, it seems fair at least to say that iconic Japanese star Asano Tadanobu has taken on the antagonist role in Sono Sion's upcoming Shinjuku Swan 2. And with a pair of trailers - one sixty seconds ling, one ninety - releaseing today we're now given our first look at Asano in action.

This latest adaptation of the Wakui Ken manga sees Ayano Gou's lead character - as mentioned, a recruiter for hostess bars in the Shinjuku district - drawn into conflict with Asano, who is the CEO of a larger recruiting company. Chaos and crazy hair ensue.

The Shinjuku Swan films are amongst the most overtly commercial of maverick director Sono's career, backed by a major studio and aimed straight at mainstream release so the production values and scope here is very much on the higher end of his work. Both trailers are below.