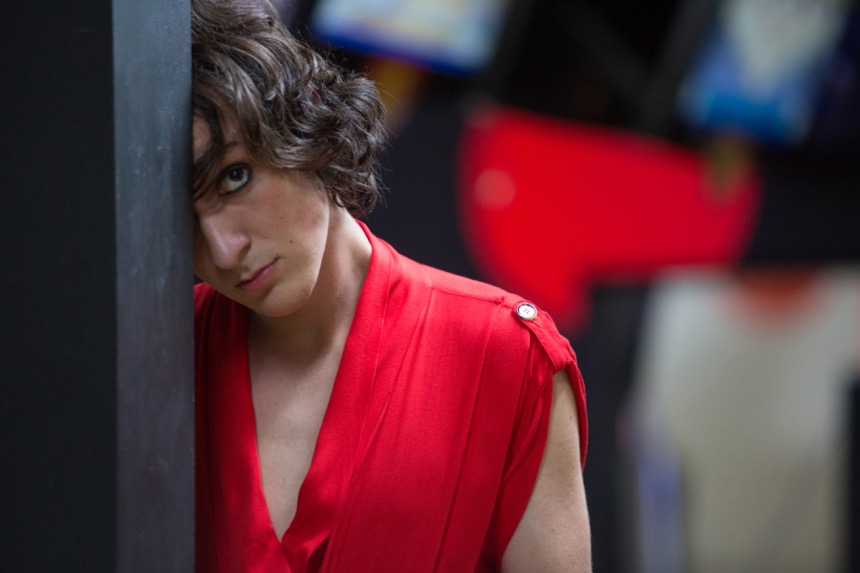 Pierre (Naomi Nero), an eyeliner wearing 17year-old High Schooler is first seen flirting and making out with both sexes in a night club. His trousers are on the floor, revealing he is wearing a g-string and garter belts. He paints his nails and plays guitar in a rock band. He tries on lipsticks and dresses secretly in his tiny room.

Pierre lives with his busy single mom, Aracy (Daniela Nefussi) and his younger sister, Jaqeline (Lais Dias). But one day, their normal lives get turned upside down when Aracy gets arrested for child abduction. It turns out Pierre was stolen from his crib 17 years ago and his biological parents were searching for him ever since. Through well-meaninged, but ineffectual social workers, his well-to-do real parents are anxious to reacquaint with him and make up for lost times. It turns out Pierre, now Felipe, has a brother Joca (Daniel Bothelho), a well-adjusted, normal kid who seems a little lonely.

At first, the interactions between the real parents, Gloria (again played by Nefussi) and hot-tempered Matheus (Matheus Nachtergaele) and Pierre/Felipe are polite and awkward. But after the teen moves in to their opulent house, they realize that their long lost son is not what they imagined him to be. Gloria's constant mommying and pampering and Matheus' frustrations with the effeminate nature of Pierre/Felipe soon boil over.

There is a hilarious scene at the mall concerning Pierre/Felipe trying out clothes while Gloria, Matheus and Joca look on. The parents pick out clothes for him to try on - polo shirts and slacks, the usual stuff teens would wear. He comes out of the dressing room in a black and white, skin-tight frilly dress. They think it's a joke or perhaps a rebellious teen angst statement-- haha funny, now change back to your polo shirt. But Pierre insists the dress is what he wants and they will buy it for him.

The film's original Portuguese title is Mãe Só Há Uma- There Is Only One Mother. But even though Daniela Nefussi plays both mothers, the film’s focus is exclusively on Pierre. Nero, with his good looks and natural performance, is magnetic as a teenager who is finding himself as an individual.

Don't Call Me Son doesn't dwell on nature vs nurture or rely on cheap sentimentality. The film doesn't even try to make any big statement on gender equality or social justice. It focuses on a young man who is very comfortable with his identity even though his life has become chaotic. But he's not a helpless victim who's unsure about his place in the world. And he also has a great, caring heart.

Beautifully acted and superbly written, Don't Call Me Son is a little gem of a film that needs to be seen widely.

Don't Call Me Son, has a two week exclusive engagement at Film Forum in NYC, starting 11/1.

Do you feel this content is inappropriate or infringes upon your rights? Click here to report it, or see our DMCA policy.
Anna MuylaertNaomi NeroDaniel BotelhoDaniela NefussiMatheus NachtergaeleDrama