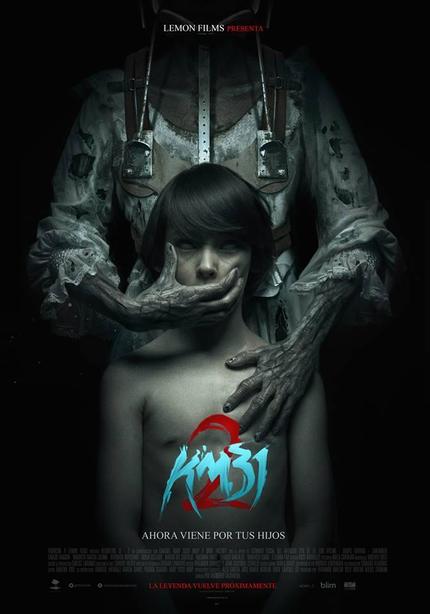 There are some places you should just never go back to. That seems to be the general point of Rigorberto Castaneda's upcoming KM 31 2. The sequel to Castaneda's hit Mexican horror returns to the scene of the first film - a fateful and very, very haunted mile marker along a dangerous stretch of remote highway - and the results look absolutely horrifying.

Though Mexico has a long history and tradition of horror film that tradition had been largely abandoned by recent generations until Castaneda emerged on the scene as the first of a fresh wave of Mexican genre voices that now also includes Jorge Michel Grau, Emilio Portes and Argentinean transplant Adrian Garcia Bogliano. Castaneda is by far the slickest and most commercially minded of that group, with his work having the look and feel of the peak years of Spanish production house Filmax, who actually handled international rights on the original KM 31.

With the film's release coming on November 4th there are now a pair of trailer out there and they're hugely effective stuff absolutely packed with fantastic visuals. Check them out below!

Do you feel this content is inappropriate or infringes upon your rights? Click here to report it, or see our DMCA policy.
HorrorMexicoTrailerRigoberto CastañedaCarlos AragónMauricio García LozanoAdrià ColladoVerónica Merchant