Destroy All Monsters: The Tyranny of Straight Lines in ARRIVAL 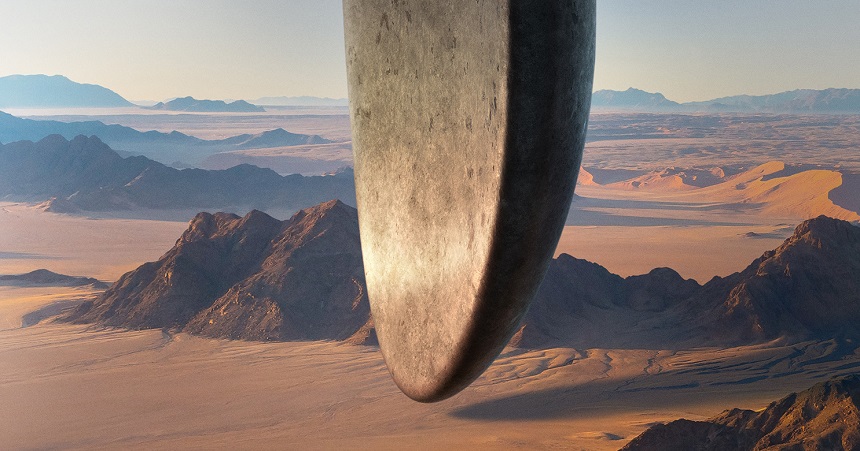 Spoilers for Arrival, even if (on one level) Arrival makes a pretty compelling argument that spoilers do not matter.

Everything is at right angles in Arrival, which is one of the strategies the film uses to disorient and disrupt its audience. The iconic image from the film is of a flying saucer standing on its end above the surface of the earth, perpendicular to how we normally perceive or imagine them.

When you think about the direction from which a flying saucer would be traveling, this actually makes a good amount of sense - it's us who are enslaved to a very specific perspective of direction, not them. The effect is enhanced further in the film when the humans enter the alien spacecraft and have to cross a gravity shift - a vertigo-inducing sequence where left becomes down, with normal "prisoners of gravity" visible just a few hundred feet away, sticking out towards our characters at a right angle to what they now consider the ground.

One of the central precepts of Arrival holds that the way we learn language impacts the very nature of how we think. The film is about the attempts to communicate with an alien race, so this is a pretty important idea on a narrative level.

It also matters thematically: we are who we are because we think in straight lines, causes and effects, C following B following A. The first language tool any child learns: the alphabet, always in that order, always with that song. There is no other way.

Along those lines, Arrival uses its music to disrupt audiences' comforts, too. There is very little melody in Jóhann Jóhannsson's score, though, because melody is itself a time-bound progression, and the aliens have none. As with his work on Villeneuve's Sicario, a lot Jóhannsson's score for Arrival is simply pulses and rhythms; but more to the point, its signature motif for the aliens is not music at all, but a series of random, atonal sounds.

It reminds me of whale song, though using the term also makes me realize that the words "whale song" is a very anthropomorphic idea. We don't know that whales are singing. We don't know that they're conveying time bound chunks of information in a specific order, or at least, not as we understand it.

Neither, as it turns out, are the aliens in Arrival. It's another vertigo-inducing moment: the gulf between our speech and their speech is not merely a matter of vocabulary and grammar but of an understanding of time itself - again, the nature of language forming the nature of thought, although in the aliens' case, a circular, non-narrative language has lead to a de-emphasis of the importance of time as a unidirectional straight line.

The visual design underscores the point. When we try to teach the aliens our written language, that language is (of course) a straight scrawl across a white board of a progression of concepts and ideas. (Amy Adams even diagrams a sentence at one point, to remind us how this train of information works as a comprehensive unit.)

The alien language couldn't be more different: it's a circle, with layers of meaning coded into blurs and smudges along the circles' edges. To them, language isn't a story, and by extension, neither is time. Time is just happening.

Here on Earth (both within the film, and out in the real world), time is always a story, and all stories are arranged around it. This happened, then this happened, then this happened. Our entire understanding of psychology is based in how events in the past must have manifested in our troubles of the present; people spend years lying on therapists' couches excavating their own stories to try to untangle the knots that those stories have, theoretically, gifted them with.

(Watching the film I was reminded sharply of D.M. Thomas' novel The White Hotel, where a woman undergoes Freudian analysis because of a "hysterical" pain in her uterine tract, purportedly related to traumas in childhood. It is revealed at the end of the book that the pain was actually caused by a future event. The heptapods of Arrival would understand.)

Certainly on some level, depression is borne out of the weight of the past, and anxiety out of the weight of the future; as a species, we generally suck at being here "now." I've written about mindfulness in the past, and one of the tools I've been working with in my mindfulness practice is to "feel the feeling and drop the story" as a means of letting go of these time-bound constraints around my own emotional state. Given that we are a species almost entirely wired to our own perspective, this is - as you might expect - exceedingly difficult.

But I return to the theme of Arrival, and the ways in which the film disrupts audience expectations visually, sonically, and even linguistically, to attempt to coach us on the possibility that our human perspective on time - on stories, essentially - is just that: a perspective. It is no more "true" than any relative direction in outer space is "up." Stories are just a means by which we anchor ourselves, and an important one; all of culture is based in stories, and I will never discount their value, nor the value of representation within them.

What I found so refreshing about Arrival, though, was the gentle reminder that the awareness of a perspective is, by its very nature, the potential to place our awareness somewhere else. Towards the end of the film, Amy Adams' character, Louise, learns to speak the aliens' language, and in so doing, gains the ability to see time all at once, instead of in a straight line.

In one sense, this turns her into a Cassandra character, seeing the outcome of the alien conflict beyond the time-bound moment, which (understandably) the military forces around her have difficulty trusting.

In another sense, though, Louise's new ability poses a very simple thought experiment: if you knew the outcome, would you do it anyway? How would your relationship to this moment change, if you were also aware of all the moments - good, bad, otherwise - to follow?

Her solution is beautiful, and form's the film's central point. Removing the weight of time opens the present to be exactly what it is, no more, no less; to be welcomed and cherished for its specific, unique tone, unburdened by the greater significance of where it has come from, or where it might be going.

Feel the feeling, and drop the story.

Villeneuve's next film is Blade Runner 2. I am deeply ambivalent about this. Part of my ambivalence is because I consider the final moments of Blade Runner to be one of the greatest existential statements in all of human art: confronted with the certainty that Rachel is a replicant, and that he might be one too, Rick Dekard takes Rachel's hand and leaves Los Angeles anyway - because all futures are an illusion, and our choices in this moment are the only things that matter anyway.

By its very nature, that ending requires that there never be a sequel, or any more to the story. The audience must be left in the same sense of suspension as Dekard in that moment, never gaining any certainty about what the next four, or forty, years held for Rick and Rachel.

That said, Arrival is as strong a companion piece to Blade Runner, on a philosophical level, as I've seen in years. It is a reworking of the same theme by wholly different means. It suggests that Villeneuve and his team have something to say about this essence of human reality - about the illusion of the story, and the meaning of the moment.

Perhaps with Arrival, they've already said it. Time is a flat circle.

Do you feel this content is inappropriate or infringes upon your rights? Click here to report it, or see our DMCA policy.
Amy AdamsArrivalBlade Runner 2Denis Villeneuve