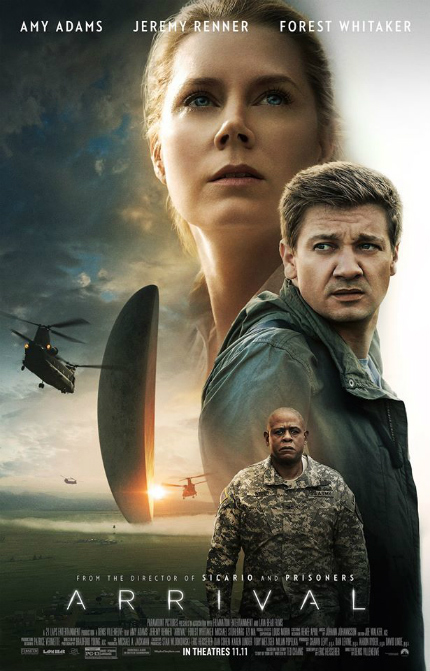 They should have sent a poet.

The imagining of humankind's first contact with alien lifeforms is territory well-mined in popular fiction and probably best executed in Robert Zemeckis's wonderful 1997 film Contact. With such great works in the past, is it really necessary to head back down this path yet again? The answer is an emphatic, Yes. When done well, the subject makes us confront our humanity in unique and cathartic ways. This is absolutely the case in Denis Villeneuve's Arrival – a film that tackles ideas even bigger than our species' role in the universe, and does so with pure elegance.

Like Jodie Foster's Ellie in Contact, the protagonist of Arrival is a brilliant female scientist. This one, Louise, is played by Amy Adams. Unlike Ellie who is an astronomer, Louise is a celebrated linguist. This is because the aliens in Arrival have already made it to Earth, showing up in 12 monolithic ships floating near the surface in 12 seemingly random locations around the planet. The bulk of the drama of the film is figuring out how to communicate with the beings. That makes Louise the person most qualified to head up the USA's efforts in the project.

Louise is scooped up by the military leader of the operation Colonel Weber, played by Forrest Whitaker, and flown to rural Montana where one of the ships towers over a serene valley floor. There she is paired with Dr. Ian Donnelly (Jeremy Renner) and set to work on the problem. It doesn't take long for the scientists to have their first startling contact with the aliens as they are invited into the ship by a door that opens at periodic intervals to grant them access to a chamber where the aliens can communicate with the humans from the other side of a glass wall.

Weber is a constantly ticking clock on the operation as tensions are high among world leaders. His focus and the absolute goal of the mission is to figure out what the aliens want before one of the other 11 countries with floating visitors hovering over it gets an itchy trigger finger and either causes world destruction or turns the benign aliens hostile. Whitaker is excellent in this role and his nervous energy is a palpable extension of the very notion that the United States of America might not be in a position of ultimate power.

Villeneuve does an excellent job of balancing the enormous tensions of the situations with the drama in Louise's personal life. While this juxtaposition may seem like simple character work at times, it actually points towards much larger themes that emerge as the team continues its work with the creatures. Without venturing into spoiler territory, there are some very big ideas in Arrival that make us question not just how we interact with our planet and each other, but the very ways we perceive space and time. These are handled delicately but beautifully and the impact has ramifications that keep the viewer reconsidering common assumptions long after the credits role.

It's a rare thing for a film to tackle such challenges and thankfully Villeneuve – who is quickly becoming one of the best directors working today - is absolutely up to the task. This is an entertaining movie through and through, even without the scientific deep dive. But the big ideas are there, and Denis Villeneuve is just the poet to take us on the journey.

Do you feel this content is inappropriate or infringes upon your rights? Click here to report it, or see our DMCA policy.
Amy AdamsDenis VilleneuveForest WhitakerJeremy Rennersci-fi