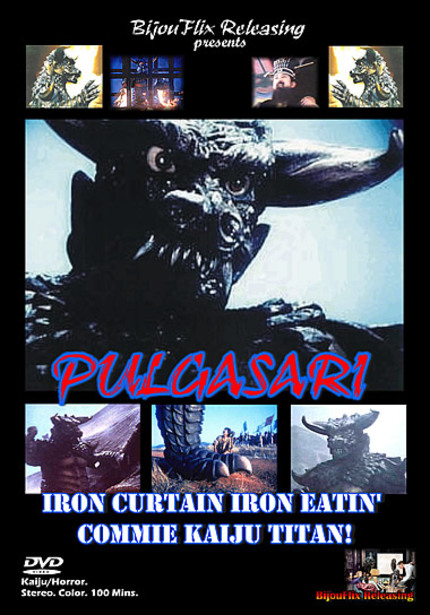 North Korea is a country that is infamous for dictatorship, brutal communism, crime against humanity, and propaganda movies. The 2nd leader Kim Jong Il was inspired by many great movie makers from Japan, the western countries and his neighbor in the south, he was involved with everything that produced including tv series like "Unsung Heroes" that casted four American defector stooges.

In the late 1970s Kim Jong Il did something unbelievable to be true. He kidnapped a famous South Korean director by the name Sang Ok Shin and his wife Eun Hie Choi. Together they made several well done propaganda movies including the North Korean answer for Godzilla "Pulgasari", created in 1985, when it got released in the European film festival in Vienna 1986 it became the directors ticket out of North Korea.

In feudal Korea, during the Goryeo Dynasty, a ruthless King (Yong Hok Pak) controls the land with an iron fist, subjecting the peasantry to misery and starvation. An old blacksmith Takse (Gwong Ri) who was sent to prison because he refused to create weapons of the poor farmers iron pots, instead he creates a tiny figurine of a monster by making a doll of rice which he sends to his daughter before he dies. When it comes into contact with the blood of the blacksmith's daughter Ami (Shang Son Hui), the creature springs to life, becoming a giant metal-eating monster named Pulgasari. The evil King becomes aware that there is a rebellion being planned in the country lead by Inde (Ham Gi Sop), which the evil King intends to crush, but he runs into Pulgasari, who fights with the peasant army to overthrow the corrupt monarchy.

Unfortunately the production of this movie is less interesting then the actual story of how the director agreed to make films in North Korea in the first place. Sang Ok Shin and his wife was kidnapped in 1978 in Hong Kong by North Korean agents. 5 years later after a attempt to escape, they agreed to make epic North Korean movies, from 1984 Shin made 17 movies in just two years, including "The Emissary who did not return", "Sogum", "Sarang Sarang Nae Sarang", and "Pulgasari". In 1986 he worked on the famous Korean ninja movie "Hong Kil-Dong" but was incomplete after Pulgasari was going to be screened in Vienna, there he manage to escape with his wife to the American embassy, 3 years later Hong Kil Dong was finished but with a director pseudonym Kim Il In, which is the North Korean pseudonym for a none director credit, in North America we have the Pseudonym Alan Smithee. Shin passed away in 2006, he was 80 years old.

Despite Shins great work, and the Pulgasari creature is very impressive, it still cannot escape from a propaganda stamp. No matter what kind of movie it is we are watching from North Korea, it will always feel forced, and even though the couple later became safe in South Korea, and this movie is 31 yeas old, it still feels uncomfortable by just even the logo opening. In other words propaganda movies from the DPRK will always be a 0/10 movies despite what effort. If something is forced it cannot be watchable. However I will reward this movie a 2/10 just for Shins hard work.