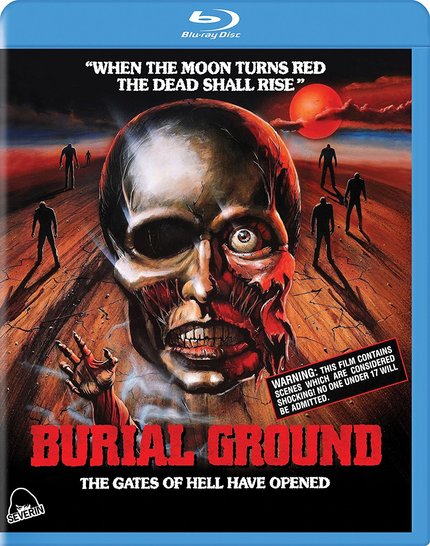 Our Charlie Hobbs described the plot of Burial Ground in his previous review:

Burial Ground tells the story of a group of a bunch of zombies killing and eating a bunch of locals along with a professor and his family, who have all been invited to a country mansion for the weekend. The story is really pretty pointless, as Bianchi doesn't spend a whole lot of time fleshing out anyone's motivations or characters. What the film is really about is zombie hunting hapless humans trapped inside the mansion, and that's what happens. Repeatedly. For ninety minutes.

Not terribly encouraging. I've seen the film a number of times and even though I do agree that it is largely a repetitive and numbing experience, this last viewing did uncover a few more rewarding aspects to the film. It's a fun ride with a number of wonderfully bizarre moments that truly make the film exceptional, and almost none of these moments have anything to do with the zombies.

I'd be remiss if I forgot to mention the huge contribution of the legendary Peter Bark as Michael. Bark was in his twenties when he took on the role of the 12 year old Michael in Burial Ground, and everyone knew it. It's a surreal touch that lends the film a certain air of otherworldiness. How on earth do the other characters not realize that Michail is an adult?

His incessant whimpering brings a strange tone to the film which might otherwise have been fairly forgettable. He may not be the greatest actor, and Burial Ground certainly leaves a lot to be desired as a film, but Peter Bark is utterly unforgettable and his presence definitely puts this film into it's own sphere of existence.

I know a lot of cult film fans will chastize me for my lack of enthusiasm for Burial Ground, but I just don't see what everyone else does in this film. The weird incestual relationship between Michael and his mother, the absurd line readings ("this cloth, it smells of death"), the mud-faced zombies, it's all a bit of fun, but not worthy of it's legendary status among zombie-philes. However, to each their own, and legitimate fans of the film will be left speechless by Severin's presentation, and that's what's important.

Severin Films new Blu-ray release of Burial Ground improves upon the UK disc in several notable ways, which is impressive because it's only been a few months since that release. Most importantly, the movie looks quite a bit better. Severin's new 2K scan and restoration has a much better looking color palette, cleaner image, and looks as though it could've been shot yesterday but for the fashions. The disc also includes a pair of uncompressed audio soundtracks in Italian and English, I watched it in English because that's how I've always known the film and it sounds just fine.

The Severin Films disc includes several exclusive featurettes not found on the 88 Films Blu-ray. First up is a wonderful video tour of the Villa Parisi, the shooting location of Burial Ground and many other Italian horror and giallo films. This feature leads the viewer to specific locations from Burial Ground as well as talking about the performers and their histories, it's probably the most comprehensive piece on the disc.

In addition to that, we get a convention Q&A with Peter Bark, an interview with noted stage performer Simone Mattioli, and an archival interview with producer Gabriele Crisanti and actress Mariangela Giordano. All of these pieces comes together to present a wonderful holistic look at the film and it's surprisingly long life on home video. We also get a few deleted scenes and a trailer.

I may not love Burial Ground, but Severin's new disc is easily the best Blu-ray option and the bonus features definitely helped me to appreciate the film more than before. If you're a Burial Ground fan, this is definitely the disc to own. Great image quality and comprehensive bonus materials make this an easy recommendation.