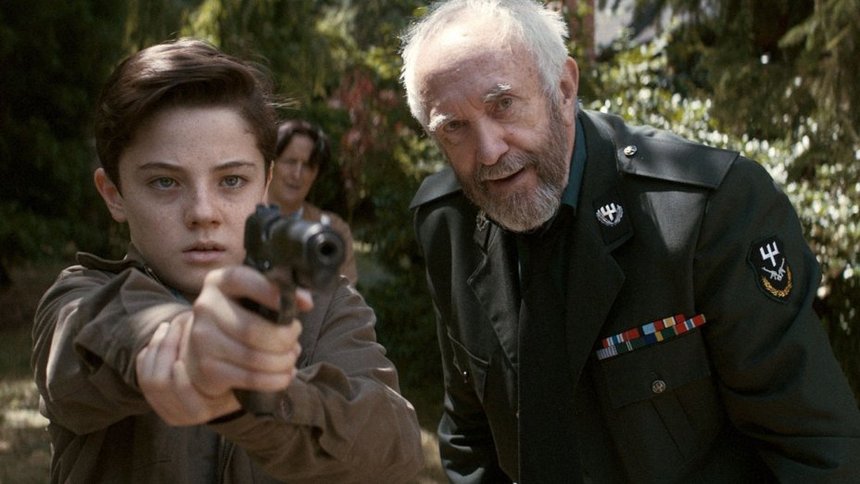 Dystopian film and literature has taken a turn from science fiction to possible current affairs, in our recent political climate. With the rise of right-wing political ideology and right-wing political control of influential countries, these stories are more important than ever. And it is in this climate that The White King offers a frightening but all-too-prescient vision of the future. The feature debut of co-directors and screenwriters Alex Helfrecht and Jörg Tittel, it looks through the eyes of a young boy to envision how one could, or could not, speak against an impossible authority.

30 years ago, a revolution occurred in The Homeland, which is now an authoritarian country. Djata (Lorenzo Allchurch) and his mother Hannah (Agyness Deyn) are left alone after father and husband Peter (Ross Partridge) is taken by the authorities for speaking out against the government. As they try to locate him, Djata must navigate the world he is growing up in which values conformity and silence, while his mother must decide whether to reach out to her in-laws (Fiona Shaw and Jonathan Pryce), heroes of the state who dislike Hannah's 'dissedent' origins, for help in finding her husband.

This film is an adaptation of the book of the same name by György Dragomán, which was based on his experiences growing up in Ceausescu's Romania. Adapting a book to the screen is always a daunting task, even more so when the story is told through the eyes of a 12-year-old: children that age often don't have the intellectual comprehension or emotional maturity to fully understand what is happening around them. But rather than try to explain everything to make it more easily digestable, Helfrecht and Tittell stick with Djata's perspective, which might be difficult for some spectators to adapt to.

However, it is to the film's credit that the story is neither dumbed-down to make Djata seem less intelligent than he is, nor elevated beyond his level. This is how young people learn about the world; on the one hand, they take in information as Djata does: witnessing his father leaving with the authorities, knowing what it means, but unable or unwilling to recognize it on a conscious level. On the other, they are still children, and so the theft of his football by local, older bullies carries significance. There are moments of a boy's own adventure juxtaposed against the authoritarian backdrop, with which Djata has yet to decide his place.

The behaviour and actions of the adults around Djata add to his confusion over which side he must follow. His love for and belief in his parents seems to be absolute, so he believes his father's story of buried treasure at the feet of the statue of the country's hero, and he helps his mother when her desperation for information leads her into a compromising situation with a high-ranking military officer. But his time with his grandmother, who upholds the beliefs of the state, and his grandfather, who might have only upheld them to protect his family, has an affect on his still young and malleable mind. And this is presented without judgement: how does a child comprehend when he is part of a class that is treated with both reverence and disdain at the same time? How can one fight a system when even the smallest descent means imprisonment? It's easy to fight for one's principles on a full stomach.

Helfrecht and Tittel move the story from Europe to an unclear western location; this takes a bit of getting used to, as often the specific can be more powerful than the general. But, in combining different cultural aspects of various countries, a point is made about easy it would be for this to happen anywhere (as it did in Europe in the 20th century, as it could be happening now in the US). The opening title sequence is a marvel of animation, introducing the spectator to the world of the film solely through images and music. The cinematography is clear and concise; the landscape is beautiful, but the buildings are run-down; the costumes reflect a state-desired utopian vision of the agrarian peasant as the heart of a country, but that peasant is ill-treated by the state (to say the least). The moments when Djata is exposed to what lies beyond his country life; future car technology, security systems, a moment when he sees television footage of a cityscape, are made more powerful as this footage is scene both figuratively through and literally in his eyes, a more progressive and hopeful place that is denied to him.

The White King is an impressive feature debut; Helfrecht and Tittel have taken a text difficult to adapt and remained faithful to the story's intention while using the cinematic form to speak for what cannot be translated from words.

More about The White King