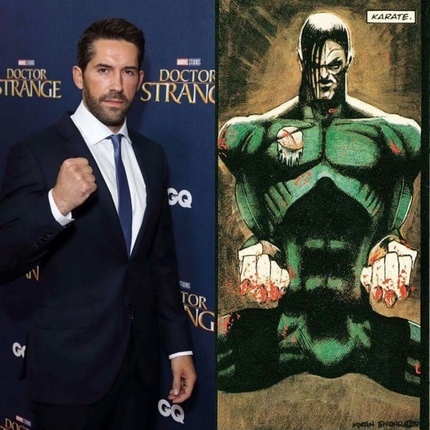 The past few weeks have been brewing something under the radar in a modest effort to surprise action fans before several details about Jesse V. Johnson's latest film, Accident Man, were leaked online via IMDb. At this point it pretty much makes the best sense to report it all know and thus, the latest trade news via Deadline confirms most of the suspected cast along with a few surprises as follows.

And indeed, it is the man himself, Marvel's Doctor Strange co-star Scott Adkins who took to his Facebook fanpage earlier on to tease the project as a lifelong passion inspired by one of his favorite comic book characters in which he has since been confirmed to star. Stu Small is penning the film, based on the property created by Pat Mills and Tony Skinner and launched in the U.K. through formerly existing publisher, Toxic!, which sees British martial arts and film star in the title role of Mike Fallon, a professional assassin and clean-up expert whose cavalier attitude changes when he learns his beloved girlfriend, Beth, was murdered by a member of his team.

Adkins's role will be joined by Twilight Saga co-star, actress Ashley Greene who, as of Deadline's report from a few weeks ago, will play Charlie, the woman with whom Fallon teams up with to find Beth's killer. The report also confirms a slew of action genre heavy hitters with a cast that lists Star Wars: The Phantom Menace's signature villain, actor Ray Park, as well as Skin Trade and Falcon Rising star Michael Jai White, Punisher: War Zone and G.I. Joe: Retaliation co-star Ray Stevenson, and The Gate shortfilm and Lady Bloodfight feature star, actress and martial artist Amy Johnston.

The film also marks another reunion for action impressario Tim Man who previously styled the fights in James Nunn's forthcoming WWE-produced thriller, Eliminators, Isaac Florentine's Ninja: Shadow Of A Tear and Florentine's producer-credited Boyka: Undisputed which arrives in 2017 from director Todor Chapkanov. Adkins himself is also producing the film as are Craig Baumgarten, Erik Kritzer of Link Entertainment and Ben Jacques for the film's production setting up in London this month.

Do you feel this content is inappropriate or infringes upon your rights? Click here to report it, or see our DMCA policy.
accident manAmy JohnstonJesse V Johnsonmichael jai whiteray parkray stevensonScott Adkins