Review: IN A VALLEY OF VIOLENCE, Ti West's New Western 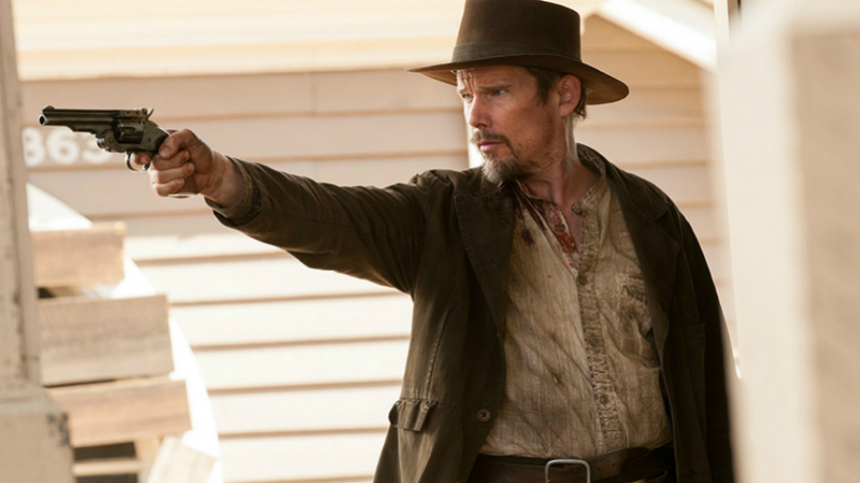 In Sergio Leone's classic The Good The Bad And The Ugly, one of many iconic scenes involves a gunfighter sneaking up to murder Eli Wallach's Tuco in a bathtub.

The anonymous heavy lost his arm in a shootout with Tuco in the opening scene of the film, and seeking bloody revenge, as is par for the course in so many Westerns, he stops first for a smug monologue about how it took months to learn how to shoot with his other hand. As the grimy, Italian blonde savours the reversal of fortune (again, a staple of this superb film) with words, Tuco turns the table because he has his pistol in the bathtub. He blows away the smug, would-be killer through the soap suds. To the corpse, he lectures, "When you have to shoot, SHOOT. Don't talk."

It would not surprise me in the slightest, if it was this scene alone that inspired Ti West to make In A Valley Of Violence, a film that seems a full featured examination of what amounts to a throwaway two minutes in a 179 minute film. More recently, HBO's Deadwood, the Coen Brothers' True Grit remake, and the recent pair of Quentin Tarantino gunslinger film have set out to prove that excessively loquacious, but nevertheless savoury, dialogue is a wholesome part of the Western that bears at least some consideration.

Ethan Hawke plays civil war deserter Paul, who, after a Shakespearean styled prologue with a drunken Irish priest (Burn Gorman doing what he so wonderfully does) about the nature of where he finds himself, ends up nevertheless caught up in the local toxicity of a friable futureless village-slash-movie-set called Denton. He tries to keep his head down and sip his drink at the bar as the local blowhard and sadistic bully, Gilly (Generation Kill & The Wire's oily-but-wide-eyed James Ransome), who also the deputy and son of the town's sheriff, picks a fight with him for no reason other than that Paul a stranger in a place that, you guessed it, don't like no strangers.

Don't get me wrong though, the point of the film seems less about realistically defined characters or completely reinventing the wheel -- West even shoots on 35mm film, although he favours 1.85:1 over cinemascope to keep things somewhat small -- and more about playing with familiar tropes of the western. This auto-critique of the genre, whose often deadpan and straight-up approach to many familiar situations is sure to be abrasive to some.

Paul being forced to deal revenge to many of the denizens of Denton is without question a given in this sort of thing. As Paul reluctantly returns to town with guns a-blazin', it is more through dialogue than gunfire that the showdown at high noon takes place. If there is a mission statement to In A Valley of Violence it is (as stated above) when to speak and when not to speak.

This is no better embodied than in the films most surprising and winning performance. Taissa Farmiga, younger sister of the always great Vera Farmiga, proves herself a charming, motormouthed lady-friend to Paul. Going so far as to offer her hotel as a kind of safe-space to all the vitriol on display in the town at the risk of alienating her pampered older sister (another solid turn from sci-fi stalwart Karen Gillen) who is engaged to Gilly. Further complicating matters is the pragmatic, intelligent sheriff, ably played by a grizzled John Travolta, looking to out grizzle Kurt Russell's facial hair from Bone Tomahawk.

Travolta is quite convincing as a weary but savvy antagonist. As is often the case with smart dictators, he has surrounded himself by ineffectual morons, this includes his son, but also character-actor stalwarts Larry Fessenden, Tommy Nohilly and Toby Huss, all of whom are quite excellent each in their own unique brand of henchmen incompetence. I like the small wardrobe detail of the sheriff's badge which cannot be mounted on his chest because the pin is broken.

Travolta is not in the film very much, but oh-boy does he make the most of this screen time offering delightfully purple mouthfuls of monologue! It doesn't so much chew scenery, but rather roll it around on his tongue to get every molecule of flavour from the experience. His presence here recalls Ed Harris' offbeat turn in the underrated Western-satire, Sweetwater. Damn if it is not a fun decade for those desire to see filmmakers playing in idiosyncratic ways in the dusty, mostly abandoned sandbox of the wild West and where we currently are with one of the great American cinema archetypes.

On a further side-note, I am always a sucker for a shot where a character steps to the side (or removes an obstructing object) to reveal information in the frame without cutting, and Ti West enjoys doing it often here, to suggest that a good use of film language can make up for some of the things the films deficiencies.

If there is nothing particularly deep on display here, it is still fun to be treated to a classic animated red white and black animated title sequence, to take in Jeff Grace's Morricone styled soundtrack, and to watch a talented filmmaker have a bit of a lark with a genre he has clearly has affection for. For good reason the film is titled In 'A' Valley of Violence, and not in 'The' Valley of Violence.

Remember that in its heyday, everyone was grinding these types of films out mostly without the reverence of the revisionist westerns that came at the tail end. Before things got all serious with The Wild Bunch and Unforgiven, there was a tradition of using the Western as a clothesline for comedy; hell, Leone himself ghost-directed the goofball My Name Is Nobody, and even managed to get Henry Fonda to co-star.

Suffice it to say, I found the experience of watching West's plethora of dialogue set-pieces, off-kilter domestic situations, and occasional forays into grit and violence to be satisfying in their own fashion. The movie is less about telling a great story and more a long-winded conversation with other films. Peoples mileage on this will certainly vary, but I believe there is a spot at the table for fare such as In A Valley or Violence, even if it is just more of an amuse bouche than an entree. Aw shucks, Tuco might be shaking his head and wagging his finger as his shooting iron cools nearby, you know the man liked a good bit of chit chat while breaking bread.

Review originally published during Fantasia in July 2016. The film will open in select U.S. theaters on Friday, October 21.

Do you feel this content is inappropriate or infringes upon your rights? Click here to report it, or see our DMCA policy.
Ethan HawkeJohn TravoltaKaren GillanTaissa FarmigaTi West