Now on Blu-ray: Takeshi Kitano's A SCENE AT THE SEA Remains A Minor Masterpiece 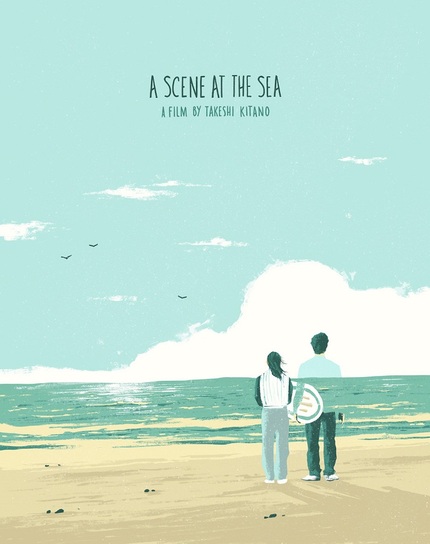 Third Window Films continues their collection of Takeshi Kitano Blu-rays with a revisit of his 1991 film, A Scene at the Sea. At the time Kitano was still seen largely as a comeic performer and his first two films started to change that perception and give him a small taste of international recognition. However, it is with A Scene at the Sea, his third feature as a director, that Kitano really showed the film world his skill set. Not only was it his first film as a director that didn't feature him in an acting role, it also distanced itself from the previous two yakuza driven features and proved that Kitano is a force ot be reckoned with and a truew artist, rather than a hired gun.

In A Scene at the Sea, a young trash collector named Shigeru becomes obsessed with a broken surfboard he finds while performing his duties. Shigeru, a deaf man, and his girlfriend Takako, also deaf, set out on a journey to learn to surf no matter what it takes. Shigeru and Takako are openly mocked by the surfing hipsters on the beach for their complete lack of skill and the broken board that Shigeru is trying to use. However, with a bit of perseverance the pair start to gain the respect of their surfing peers with teh help of a local surfing legend who works at the shop nearby.

When a surfing competition comes up, Shigeru is determined to enter and compete, but he faces even more challenges when his hearing loss costs him a chance to compete. Never one to be dissauded, Shigeru and Takako keep plugging away, and when a second chance presents itself, the pair make the pilgrimmage to the new beach and Shigeru hits the waves in an attempt to prove that he has what it takes to be whatever he wants to be.

By 1991, Kitano had already started to develop his directorial style, and A Scene at the Sea is a huge turning point in his career. When Kitano turned his attention away from the yakuza world, he discovered a remarkable talent for truly affecting emotional stories. The almost complete lack of dialogue in the film means that Kitano's characters must communicate via body language, and the result is surprisingly engaging and emotionally involved. This is a skill that he would continue to hone in films like Hana-Bi, Dolls, and Kikujiro.

Another strong thread through Kitano's career that finds its origin in A Scene at the Sea is his collaboration with composer Joe Hisaishi. While it is Hisaishi's soundtracks to those later films, particularly Kikujiro, that would become synonymous with Kitano's films, the seeds are sown in A Scene at the Sea and it is very clear right from the beginning that it is a Kitano film largely because of the symbiotic relationship between director and composer that rivals any other such relationship in cinema history. Hitchcock/Hermann has nothing on Kitano/Hisaishi.

A Scene at the Sea isn't a perfect Kitano film. You can certainly tell that the director is still trying to find his voice. However, it is a bold step that would eventually lead to Kitano's masterpieces like Kikujiro and Hana-bi. For Kitano fans, this film is an absolute must see.

Third Window Films presents the world Blu-ray debut of A Scene at the Sea, and they have every right to be proud. The film looks and sound exceptional, with Hisaishi's score deserving special attention. The colors and clarity are very good, and there are details now present that were not clearly visible in any previous DVD versions of the film.

In 1991, Kitano wasn't seen as a major international director yet, and the home video market wasn't what it is today, so there are no contemporaneous vintage bonus features. However, we are treated to an audio commentary from Japanese film expert Jasper Sharp. Sharp provides an excellent commentary that not only talks about the film as it unfolds, but also its place in Kitano's career and contemporary Japanese films of the time. This isn't Sharp's first excellent commentary track, and I certainly hope it won't be his last. It's informative, engaging, and a wonderful listen.

Third Window Films does it again with another Kitano Blu-ray that is well work your money. A Scene at the Sea is now available on Region B Blu-ray in the UK.

A Scene at the Sea