Destroy All Monsters: As THE WALKING DEAD Reminds Us, The Apocalypse Is Going To Be Disappointing Too 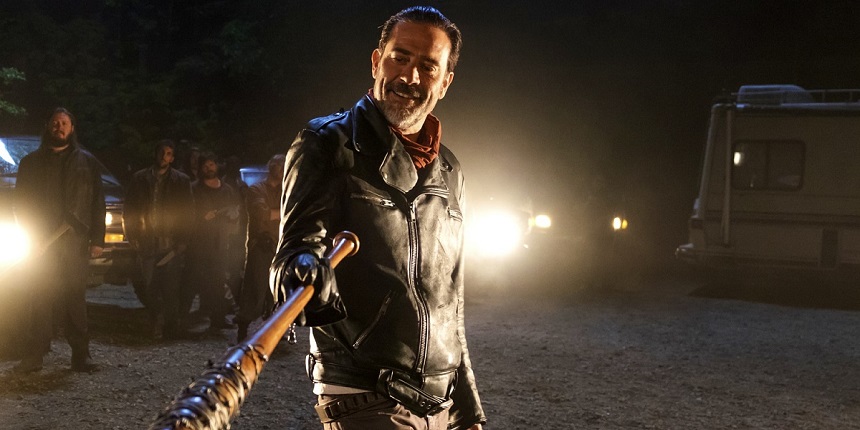 Spoilers for The Walking Dead, in case you're not on the internet ever.

I pulse in and out of AMC's The Walking Dead. This seems to work just fine. I realized pretty early on that the people who run that series aren't, in the traditional sense anyway, trying to tell anything resembling "a story." There have been some exceptions (season 3 rings a bell), but for the most part, The Walking Dead seems much more interested, and much more effective, in being a mood piece (the first half of season 4 rings a bell) than an actual narrative.

The show's non-narrative-ness supports my viewing approach. I hadn't watched any episodes since the first half of season 5, but I tuned in for the season 7 premiere (I caught up on the first half of the two-parter, too, of course) and everything seemed pretty much as I'd left it. Honestly, if there wasn't a teenager in the cast I don't know that it would be visually possible to detect what season one found oneself in at a glance. Carl's height and facial bone structure is just about the only remaining indication that time passes on that series at all.

About half the main cast was absent for most of the season 6 finale and I briefly entertained notions that they were all dead, but sure enough, before the much-discussed Negan scene, a van pulled up and they all poured out: Darryl, Glenn, Michonne. Even for a show notorious for slaughtering its principal cast on a season by season basis (more on this in a moment), such a wide delta of change in just a season and a half's worth of episodes was too much to ask.

As most fans, peripheral non-fans (like me!), and the general public know by now, the series sixth season was capped by a cliffhanger, wherein Negan (Jeffrey Dean Morgan) beat someone (but WHO?) to death with a barbed-wire-tipped baseball bat, with the promise that the seventh season premiere would reveal the identity of the deceased. (Or deceaseds, as it turned out.) Look, I grew up in the '80s and '90s, so this is all fair play as far as I'm concerned - I know who shot Mr. Burns, I know how Riker got Picard back from the Borg, and I know how television networks operate.

What was remarkable to me in catching up with the Negan episodes wasn't the cliffhanger hinge itself, but everything that lead up to it, which was an enormous amount of "not much." If network television (and at this point, I do believe the cable networks count) is consistent in anything, it's in its persistent need to operate under a "sustain sustain sustain" model. If, as a viewer, you're frustrated that your favourite TV series seems to be spinning its tires, I'd tentatively suggest that that's only because tire-spinning is the very nature of episodic television itself. It has to keep itself going, within a set of parameters, perhaps indefinitely. People use the third season of LOST as a case study here: without an agreed-upon end date for the series from ABC, the showrunners had little choice but begin to invent ways the tightly-confined plot structure (it's an island, after all) could tease out what might have been seasons and seasons of irrelevant storylines, just so they could stay on the air and keep viewers turning in.

Some shows don't give a fuck. Supergirl chews through plot at an impressive rate, never afraid to jump from big reveal to big reveal, multiple times per episode, and thereby potentially have to invent some more big reveals next week. (This might not be sustainable in the long run, but who cares - Supergirl is a very "now" show.) Game of Thrones is plotty as hell while still having whole episodes where not a whole lot seems, outwardly, to be happening - their "point A to point B" seasonal approach allows them a more creative use of inertia.

The Walking Dead, by dint of its very concept, doesn't get to play in this space.

Look, we all do a lot of fantasizing about the end of the world. (Some months more than others.) Post-apocalyptic fiction has surreptitiously overtaken the space previously held in pop culture by the Western; we used to look backwards for our lawless tales of rugged individuals trying to survive against nature and other people, and now we look forwards.

There's all kinds of writing about why, from a psychological perspective, this anticipation of a future "blank slate" state can act as a pressure relief against the anxieties of modern life. (Again, some months more than others.) It's hard to look at The Walking Dead or any of the raft of adult and young adult novels on the subject (I'm reading Emily St. John Mandel's Station Eleven right now - it's great!) without at least somewhat playing a mental game of "what would I do in this situation?"

I'm not convinced The Walking Dead is artful enough to be intentionally answering this question, but the answer seems nonetheless clear: you ain't gonna do much. On top of that, what you do do won't have much purpose. And you're just going to do it, and do it, and keep doing it, until you're so bored you might wish a Negan would show up and bash your head in.

The fantasy of the end of the world only succeeds as a fantasy (or even as a horror story, if that's what The Walking Dead is) if it offers an outcome more elevated than the one we have right now. Right now, though, The Walking Dead might be set in the zombie apocalypse but it's basically about going to a meaningless job (the job in this case is "surviving") every day till you can't stand it any more, and then keeping on going cuz you have a family to support (the "family" is Rick's gang, as the show can't help but remind us every ten seconds), and then being confronted by the inevitability of mortality (Negan, the Governor, you name it) and trying to find some meaning again anyway (the family, guys! the family!) and failing (Glenn's head being beaten to mush in front of his pregnant wife). Because guess what: that's actually it.

I think this is another reason I fall in and out of The Walking Dead so easily: in its ceaseless circularity, it's as depressing as actual life. It suffered a crisis of meaning in its early seasons, as we all do coming up on the boundary line between young adulthood and middle age, and like many of us, couldn't find an answer - and so gave into, without naming, the creeping suspicion at the heart of all atheist minds (and, I'm sure, many believers' minds too): that it really is all absolutely meaningless.

It's not a great show to watch. It is a great show to binge-watch, when you're feeling down in the dumps or getting over a cold, or it's October and it's just getting a little too chilly to go for a walk. And then, hopefully, you shake yourself off, realize the world hasn't actually ended yet, and you legitimately do have better things to do with your time.

Do you feel this content is inappropriate or infringes upon your rights? Click here to report it, or see our DMCA policy.
Jeffrey Dean MorganScott GimpleThe Walking Dead