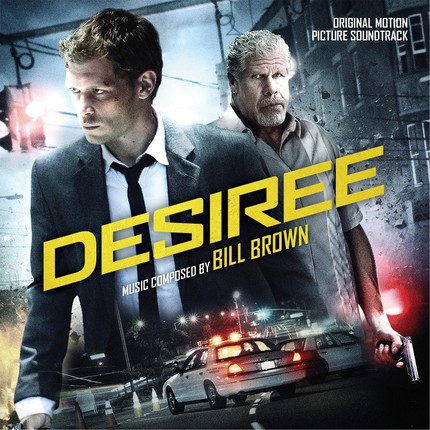 Desiree, formally Dermaphoria, first premiered at the East End Film Festival to a great response and marked Ross Clarke’s directorial debut. “Cinemazero” labeled the film’s visuals “stunning” while “Smoke Screen” compared the film to Mullholland Drive. It has since played at numerous film festivals all over the world and this month was widely released on VOD and DVD.  Also receiving recognition was the film’s score by composer Bill Brown, which is being released on iTunes October 28, 2016. Brown is best known for scoring such projects as CBS’s CSI: NY and Syfy’s Dominion. We spoke with Brown about his latest film score, discussing everything from how he got invloved to his working relationship with the director. Read the full interview below.

-Tell us a little bit about Desiree and how you got involved?

Desiree is about this inspired experimental chemist Eric (Joseph Morgan) who wakes up in a New Orleans jail accused of arson linked to an illegal drug-manufacturing ring. He has amnesia and can only remember pieces about his girlfriend Desiree. He’s released (mysteriously) on bail and is determined to find her – that’s where it all begins. My manager sent director Ross Clarke some of my music as he was shooting the film in Louisiana. I remember talking to him about how hot it was there while they were shooting the film. He loved my music and we got on really well, so there it was.

-The film is very dark and noir like. How did this vibe play into your score for the film?

The score needed to reflect how Eric is haunted by fragments of memories, his confusion and frustration, his desperation to find his girlfriend at the center of it all. The locations in Louisiana created this dreamlike noir vibe as well. I felt to really get inside that character and the location musically, I needed an instrument in the studio that reflected all of that, so I bought this beautiful 100+ year old upright grand piano and set it up in my writing and recording space. I left the tuning mostly just as I found it, changing just a few things including muting some strings and removing most of the beautiful shell of the instrument to use it.

-On the first day composing for this project, where did you begin?

Writing the music for a film for me is a combination of craft and gut instinct. The way the film is edited, how the characters reveal themselves, the lighting, the language, the atmosphere, time, place, narrative, the drama… everything informs the score. The score is subtext, what is unspoken, what we might not see on screen in that moment - What the director wants the audience to feel. The music adds another dimension to it all. After I brought that beautiful old upright grand in the studio, I worked on some theme ideas and started to film myself playing them to send to Ross.. Something I had never really done before, but for whatever reason felt like doing on this project. I think Ross and I were really on the same page with this instrument and I wanted him to see, hear and feel what it was like to hear it happening live from it in the room. I started sending him ideas and the one that stands out most in my mind was my first recording of “I Remember”, one of the last cues in the film, and one of the most integral. Ross was really excited when I sent that one. And I remember later playing it live for him in the studio.. What an exciting time..

-About how much music did you make for this film?

Lots! I think the technical / contractual term is “A whole bunch”. The soundtrack is really the parts of the score that were more melodic and had lots of rhythmic exciting elements happening, but there’s another side of the score that’s more dirty analog and ambient that we left for just the experience of the film. I loved it all, but everything I love about the score is definitely on the soundtrack.

-What was the most challenging part of scoring this film?

I think the most challenging part of any project is that part at the beginning where you’re looking for the sound… that thing that has some magic in it. With this one, I think the magic came from those moments in the studio where I just sat with the film and played. It’s different every time.

-How closely did you work with the director Ross Clarke, what was your working relationship like?

Working with Ross was inspired for both of us I think. We were like brothers, even though we just had met – really. That’s what it felt like. When I sent Ross those theme ideas on video, and then played them live to picture in the studio, he told me it transformed the movie, and his deep emotional reaction inspired me to take the piece even further in the next weeks, bringing in cellist Tina Guo to perform the beautiful cello parts throughout. I’ll always love this music… every cue has meaning for me personally, as it relates to the depth of visual poetry Ross created with his film. I feel so lucky to have had the opportunity to create it with him.

You can learn more about Bill at http://billbrownmusic.com/

Do you feel this content is inappropriate or infringes upon your rights? Click here to report it, or see our DMCA policy.
Bill BrownComposerDermaphoriaDesireeEast End Film FestivalRoss Clarke