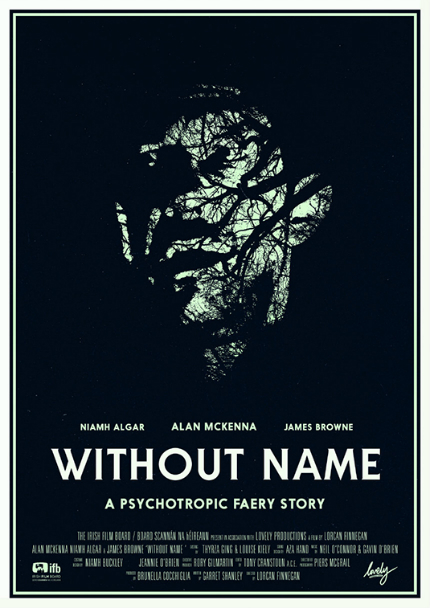 Easily the most transporting film, horror or otherwise, I’ve seen in a long time, Without Name is one of those works of art I’ll now carry around inside me. Like certain pieces of music. Like certain poems.

To be more accurate, though, its goal doesn’t seem to concern saddling the audience with its own external meanings so much as locating and drawing out meanings that were always there, lost somewhere in our interior. It’s a film that prods at the dying fires inside us and seeks to stoke them into something half-present and half-still-dormant, continuing to reside in mystery

Comparisons to non-narrative art forms shouldn’t imply that Without Name is without story. The plot is quite straightforward, growing complex only when reality loops back on itself, interrupting its own flow and disorienting both the audience (in a pleasurable way) and the protagonist (in a madness-inducing way).

Eric (Alan McKenna) is a surveyor who must take leave of his family, from whom he’s already emotionally estranged, to undertake a job with his assistant and paramour, Olivia (Niamh Algar). In the course of measuring distances and areas in the nameless wood that prompts the film’s title, the two colleagues encounter an engaging drifter, played winningly by James Browne. For all intents and purposes, these three are the only inhabitants of the wood—there are no signs of animals, no birdsong—and yet Eric can’t help but sense another presence among the trees and the mists.

The fact that our main character can be a bit of a jerk, has a problematic relationship with his wife and child, and is hired for a lonely task in a remote locale that appears to have its own consciousness will remind some viewers of The Shining. That may be a helpful reference to get a sense of Without Name’s elliptical elements and the “unreliable” nature of its own filmic narration, but it should probably serve more as a starting point than a finish line.

Instead, I’d contend that Without Name is the truest, and perhaps finest, example of the Lovecraftian sensibility ever put on film. No, we aren’t treated to the rebirth of monstrous creatures from long ago, or visiting from distant galaxies, but rather of entities so this-worldly that they’re now other-worldly—for we’re the ones who have removed ourselves from the old environments to which we were once so profoundly connected. Moreover, in terms of artistic approach Without Name is Lovecraftian in that it attempts to express that which is ineffably, and awe-provokingly, horrific; it evokes to the point where it practically invokes.

Director Lorcan Finnegan and writer Garret Shanley are the same team that brought us the haunting short Foxes a few years back, and this feature is somewhat of a companion piece. The theme of human domesticity breaking down when faced with the spirit of the truly wild is repeated in Without Name, just on a far grander scale.

In Foxes, the protagonist’s career choice of photography functions much like the act of surveying here, as a means of separation through the verbs of observing and recording—a way of being immersed in one’s surroundings, but not “of” them. Together Finnegan and Shanley not only collapse that distance for Eric, but for us as well. To say that, after Without Name, you’ll never look at a forest the same way again would be facile. More to the point, you may never look at yourself the same way either.

Do you feel this content is inappropriate or infringes upon your rights? Click here to report it, or see our DMCA policy.
Alan McKennaBrooklyn Horror Film FestivalGarret ShanleyLorcan Finnegan