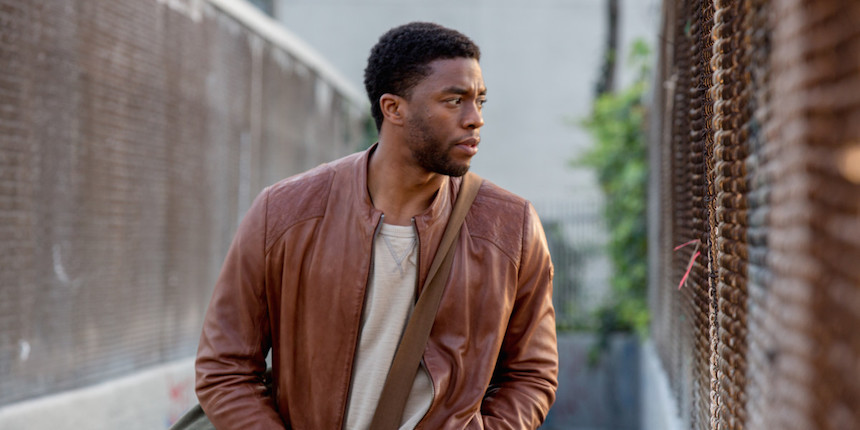 Arriving fresh into LAX with only the clothes on his back, some cash in his pocket and a South African passport, Jacob King is given the full interrogation by the customs officials, "Are you working? Are you staying with family? How are you going to manage a vacation on 600 dollars?" King is a blank slate, the mysterious nature of his trip from Cape Town, to the so-called City of Angels is as oblique to us, as it is to the authorities. But King oozes comfort in his own skin, and the quiet self-possession Chadwick Boseman (42, Marvel Studio's upcoming Black Panther)   starts Message From The King off on a confident step, reminiscent (to me, anyway) of John Carpenter's They Live.

Once on the ground, checked into the rattiest hotel this side of The Neon Demon, it apparent that King is not looking for work, nor is he here to see the sights. He has crossed the ocean looking for his sister, Bianca, who recently fallen out of touch. Drugs, gangs, or simply poverty might the cause for her disappearance. His investigation through the alien, urban landscape of 21st century Los Angeles runs the gamut: crooked cops, Korean grocers, failed actors, petty drug dealers, Balkan gangsters, hookers with that heart of gold, uber-rich movie producers, municipal politicians, and , ahem, dentistry. All of this motley crew, from the highest to lowest denizens of the city, get pulled in the gravitational orbit of hyper-cool avenging Robin Hood. King is a fountain of surprises (both physical and emotional), and so is this movie. I remember the first time I saw Chiwetel Ejiofor in Stephen Frears' Dirty Pretty Things, the electric feeling of a movie star arriving whole-cloth. I got that tingle here with Boseman.

Belgian director Fabrice Du Welz comes to America by way of South Africa to deliver a stylish, masculine noir in the vein of Get Carter and Point Blank infusing a keen outsiders sensibility how Los Angeles functions as the cinematic city of our dreams and nightmares (spot the naked homage to David Lynch's Mulholland Dr. for instance). For mood, cinematographer Monika Lenczewska delights in long shots of the impersonal downtown skyscrapers; her 35mm photography somehow resembles high-res digital, maybe those parts were done with drones. This is contrasted sharply with Bergman-esque close-ups of Boseman's beard-shadowed (but honest) face overlapping in the frame with Luke Evans' clean-shaven (but oh so slimy) visage. Alfred Molina (always a treat to see him show up against type) sits in a melancholy middle distance, his sallow impotence contrasted with the trappings of wealth success. The procedural elements of the film are easily swallowed with a spoonful of sugar.  Kinetic, and surprisingly abrupt bursts of violence are welcomely original and effective. You will never look at a bicycle chain the same way again after this film, it is demonstrated here as the swiss army knife of hand to hand fighting. Astonishing stuff that is icing on the cake.

Message For The King is somewhat of a work-for-hire project for Du Welz. I heard it be told at one point the film was to be directed by Michael Mann, with a lot of A-list talent going through the usual revolving doors prior to the finished film. Things have landed in fine hands, however. Du Welz, mostly known for his 'alienated freakout cinema,' the hapless parents who lose their child in a foreign country in Vinyan, the trapped clown in Calvaire, the mis-matched honeymoon killers in Alleluia, shifts gears into confident mainstream thriller while retaining much his off-kilter sensiblity.  In short, he directs the holy hell out of the picture, soaking the city in polyglot diversity and torrential rainfall - weird as that may feel in 2016 - like a contemporary Blade Runner. One of the films few sympathetic characters comments to King on the contraction of just how rank the city is in the rain, but how full of dreams it is in the sunshine. Du Welz prefers things wet, while South Africa, always hovers just off screen (or in a hazy 16mm flashback) like an unspoken promise, whispering, "The future, Mr. Gittes."

Message from the King

More about Message From the King