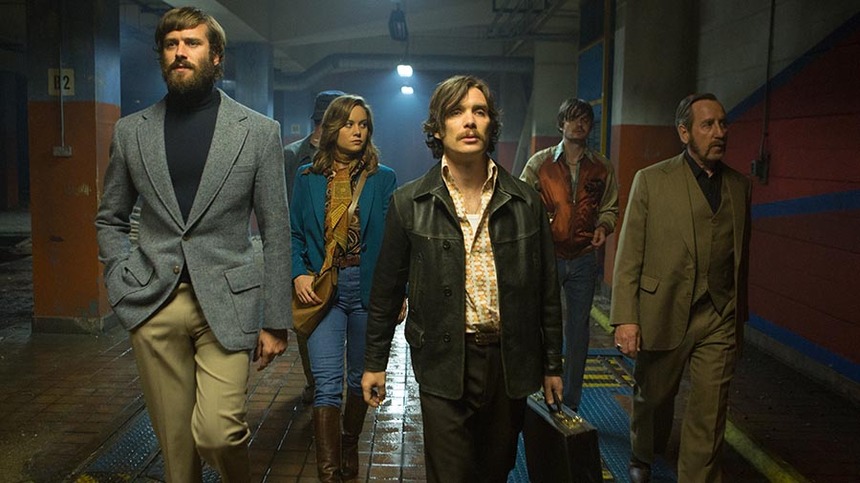 At about 15 minutes into Ben Wheatley’s sixth feature film Free Fire, it becomes pretty clear we're probably not leaving this room anytime soon. But that is totally cool. This bold storytelling gambit works because Wheatley and his collaborators (notably co-screenwriter/editor Amy Jump) have finely crafted the drama to continually up the ante, revealing just enough about who these characters are and what they're really up to. Oh and there are a shit ton of guns, too.

It doesn’t take particularly long to figure out the plot. A wily cast of characters show up for an arms deal. They're led by Cillian Murphy on one side (the buyers) and Sharlto Copley on the other (the sellers). Brie Larson and Armie Hammer are there as well as facilitators, though it's not entirely clear whose side they're on (or if they're on each other’s side). Then there are the henchmen. Each side has a handful of hapless knuckleheads including, notably, Michael Smiley and Sam Riley.

While proceedings are appropriately tense, they seem to be going relatively well. That is until two of the aforementioned knuckleheads realize they have unsettled beef. Fisticuffs ensue and since this is an arms deal after all, eventually people start firing. What follows is a feature length version of that scene in every action film where people crouch behind cars and walls trying to get a shot or six off before they themselves take a bullet.

In lesser hands this would run the risk of getting stale quickly. But Wheatley masterfully weaves comedy and plot through his 85-minute runtime to keep the audience entertained and engaged. There’s certainly no shortage of violence either. While it skews towards the comical as opposed to the gruesome, this is not the type of shoot 'em up where someone takes a bullet to the leg and is up running and jumping a few minutes later.

None of this would work without expert actors and the performances are excellent across the board. This is quite possibly Sharlto Copley’s best role yet as the way-off kilter South African gun smuggler. Armie Hammer also shines with nonchalant pot smoking and wise cracking throughout the firefight.

While Wheatley’s films have run the gamut of genres and storytelling styles, he has shown a consistent ability to paint rich anti-hero characters that you somehow simultaneously root for and against. The magic of Free Fire is that instead of siding with just one of the characters or groups of characters, you end up rooting for general mayhem instead. That's a fantastic thing considering this awesome movie is pretty much mayhem from beginning to end.

Do you feel this content is inappropriate or infringes upon your rights? Click here to report it, or see our DMCA policy.
Ben WheatleyBrie LarsonSharlto CopleyToronto