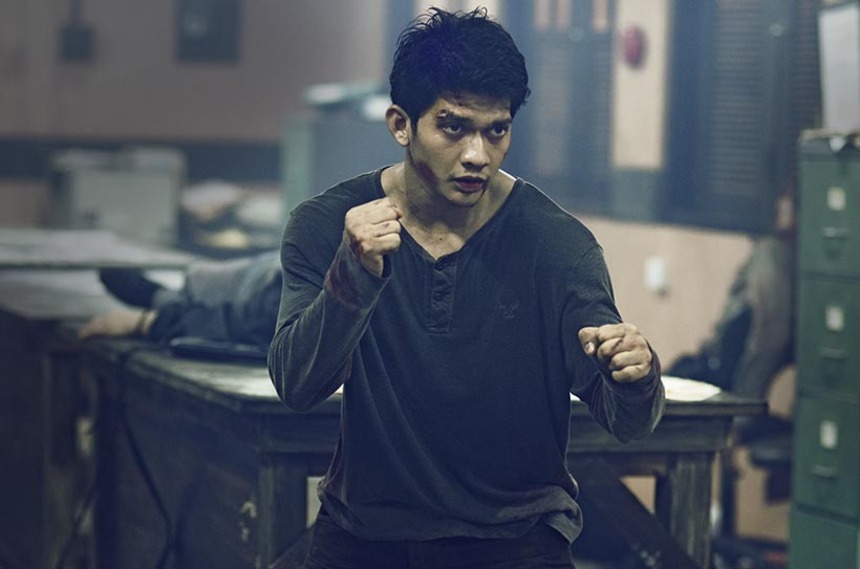 Anyone going to be in Saskatchewan in October? Well you now have a damned good reason to consider it. The good folks at the Saskatoon Fantastic Film Festival just released their full lineup and it's packed with genre goodness from throughout the year. Headshot (pictured), The Greasy Strangler, Sadako Vs. Kayako, Train to Busan, and Under the Shadow are just a few of the awesome movies you'll see at the festival which runs a svelte October 19-22. Head on up to the Great White North and check it out!

Saskatoon - September 19th, 2016 - Saskatoon Fantastic Film Festival, Saskatchewan’s only genre film festival had announced its film lineup. The 7th edition of the festival returns to the hallowed hall of the Broadway Theatre from October 19th through 22nd. This year’s lineup features a diverse selection of genre films pulled from some of the best film festivals around the world.

This year’s festival will open with the Iranian / Jordanian horror film “Under the Shadow” which thrilled audiences at Sundance with terrific scares along with its powerful story of a mother and daughter being torn apart by the Iran-Iraq war and the mysterious evil Djinn which stalks through their apartment.

Closing this year’s festival is the scary fun return to J-Horror with the original icons from “The Ring” and “The Grudge”, “Sadako Vs. Kayako”. It recently blew the roof off at its recent TIFF Midnight Madness screening and is the perfect way close out the festival with a bang!

“This year’s festival really returns us to our roots of screening cool independent and foreign genre films with a dark bent to them. This is one of our strongest years for movies with compelling strong stories. We love to program genre films that strive to elevate genre film and this year has proved to be one of the best.” said festival founder and Director John Allison.

Some of the other films at the festival include the SxSW acclaimed debut feature film from Bobby Miller “The Master Cleanse”, the energetic Korean zombie film “Train to Busan”, auteur Director Kiyoshi Kurosawa returns with the disturbing thriller “Creepy”, the new black comedy from the Richard Bates Jr. “Trash Fires”, the bio-documentary “Danny Says”, highlights the life of Danny Parks who was instrumental in the music scene during the 60s, 70s and 80s, the Canadian made invisible man story “The Unseen”, and the disgustingly fun “The Greasy Strangler” will be sure to have the audience rolling in the aisles if they have the constitution to watch.

Creepy / Japan (Kiyoshi Kurosawa) - After a traumatic incident, criminal psychologist and former police detective Takakura (Hidetoshi NISHIJIMA) moves to a new neighborhood with his wife to make a fresh start. Upon meeting their new neighbors, the Nishinos, Takakura senses something odd about them. Then he is approached by the Nishinos' daughter, whose shocking whispered confession shatters the serenity of his new life: "That man in my house is not my father... He's a total stranger."

Danny Says / USA (Brendan Toller) - Danny Says is a documentary on the life and times of Danny Fields. Since 1966, Danny Fields has played a pivotal role in music and “culture” of the late 20th century: working for the Doors, Cream, Lou Reed, Nico, Judy Collins and managing groundbreaking artists like the Stooges, the MC5 and the Ramones.

A Dark Song / Ireland (Liam Gavin) - A Dark Song follows Sophia, a young woman who insists on renting an old house in the remote countryside so that she can hire an occultist named Solomon. She needs him to perform an ancient invocation ritual, the Abramelin, to summon up Sophia’s Guardian Angel so her wish can be granted. She wishes to talk to her murdered child, a desire that consumes her.

Demon / Poland (Marcin Wrona) - Newly arrived from England, Peter is set to marry his fiancee Zaneta at her family’s ramshackle country house in rural Poland. As the ceremony proceeds, Peter begins to come undone, and a dybbuk, the iconic ancient figure from Jewish folklore, takes a toehold in this present-day celebration – for a very particular reason, as it turns out.

The Eyes of My Mother / USA (Nicolas Pesce) - In their secluded farmhouse, a mother, formerly a surgeon in Portugal, teaches her daughter, Francisca, to understand anatomy and be unfazed by death. One afternoon, a mysterious visitor horrifyingly shatters the idyll of Francisca's family life, deeply traumatizing the young girl, but also awakening some unique curiosities. Though she clings to her increasingly reticent father, Francisca's loneliness and scarred nature converge years later when her longing to connect with the world around her takes on a distinctly dark form.

The Greasy Strangler / USA (Jim Hosking) - The Los Angeles-set tale follows Ronnie, a man who runs a Disco Walking tour along with his browbeaten son, Brayden. When a sexy, alluring woman comes to take the tour, it begins a competition between father and son for her attentions. It also signals the appearance of an oily, slimy inhuman maniac who stalks the streets at night and strangles the innocent, soon dubbed ‘The Greasy Strangler.’

Headshot / Indonesia (Kimo Stamboe & Timo Tjahjanto) - A nameless man wakes up in a hospital with severe head trauma, not knowing who he is or what happened to him. Assisted by devoted student doctor Ailin, who nicknames him "Ishmael" after the character in Moby Dick, he recovers and tries to regain his memory. When Ailin is kidnapped and Ishmael sets out to get her back, he finds himself pitted against an array of skilled fighters who may have been his former colleagues.

I am not a Serial Killer / USA (Billy O’ Brian) - Sixteen-year old John Cleaver is dangerous, and he knows it. He’s obsessed with serial killers, but really doesn’t want to become one. Terrible impulses constantly tempt him, so for his own sake, and the safety of those around, he lives by rigid rules to keep himself “good” and “normal”. However, when a real monster shows up in his town he has to let his dark side out in order to stop it – but without his rules to keep him in check, he might be more dangerous than the monster he’s trying to kill.

The Master Cleanse / USA (Bobby Miller) - Down, out, and heartbroken, Paul attends a spiritual retreat to cleanse himself and fix his broken life but soon discovers that the cleanse releases more than everyday toxins... a lot more. The feature debut from Bobby Miller (TUB), “The Master Cleanse” is a humorous, weird, and soulful fantasy that examines how we deal with the things that weigh us down in life, ultimately asking the all-important question: given the opportunity to literally face your demons, what would you do?

Sadako Vs. Kayako / Japan (Kôji Shiraishi) - The evil spirits of Ringu and Ju-On curses are forced to battle when an exorcist deems it the only way to save two girls’ lives.

Teenage Cocktail / USA (John Carchietta) - Feeling confined by their small town and overbearing parents, Annie and Jules hatch a scheme of running away. The only issue is, they need the money to get there. Jules suggests the couple try webcam modelling. Although she’s nervous at first, Annie can’t argue when the money starts rolling in. But as the girls soon find out, consequences can blindside you. Sometimes violently.

Train to Busan / South Korea (Sang-ho Yeon) - Train to Busan is a harrowing zombie horror-thriller that follows a group of terrified passengers fighting their way through a countrywide viral outbreak while trapped on a suspicion-filled, blood-drenched bullet train ride to Busan, a southern resort city that has managed to hold off the zombie hordes… or so everyone hopes.

Trash Fire / USA (Richard Bates Jr.) - When Owen is forced to confront the past he's been running from his whole adult life, he and his girlfriend, Isabel, become entangled in a horrifying web of lies, deceit and murder.

Under The Shadow / Iran / Jordan (Babak Anvari) - Tehran, 1988: the Iran-Iraq war rumbles into its eighth year. The bombing campaigns focused on the city, coupled with the country’s bloody revolution, slowly tear a mother and daughter apart. As they struggle to stay together in the midst of these modern terrors, a mysterious evil stalks through their apartment, threatening their grip on reality.

The Unseen / Canada (Geoff Redknap) - In a small town in the Canadian Rockies, no one knows much about Bob. He works at the lumber mill and goes home every night alone. Some townsfolk know him from his brief stint in pro hockey, but otherwise, he’s a ghost. Bob’s only connection is a tenuous one to his ex-wife and daughter – neither of whom he has seen since abandoning them a decade earlier. When his ex-wife contacts him to tell him that their daughter is on the wrong path and subsequently goes missing, Bob puts himself at risk to find her – which reveals the terrible thing he’s been hiding from the world.

The Wailing / South Korea (Na Hong-jin) - In this unbelievably tense supernatural thriller, a foreigner’s mysterious appearance in a quiet, rural village causes suspicion among the locals - suspicion which quickly turns to hysteria as the townspeople begin killing each other in brutal outbursts for seemingly no reason.  As the investigating officer watches his daughter fall under the same savage spell, he agrees to consult a shaman for answers - unknowingly escalating the situation into something far more dangerous.