Kickstart This! A Retro-Inspired Sci-Fi Cartoon for Kids - HAPPI vs DRAG 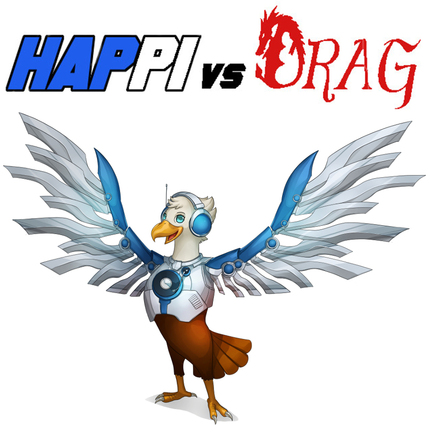 The cartoons of the 80s and 90s were full of kick-butt action, and rife with martial arts and laser guns. Most of today’s cartoons, well, aren’t.

One Kickstarter has arrived to change that – HAPPI vs DRAG.

HAPPI vs DRAG features the cybernetically-enhanced animal Agents of HAPPI working together to kick the butts of the Dragons of DRAG before they can take over the planet of New Illinois.

HAPPI, led by the optimist Kylie, depends on teamwork, positive qualities, and overcoming problems, in order to defeat the wicked Admiral Juna Rei Sin and her menagerie of greedy and/or bumbling Soldiers.

In the six-minute short that this Kickstarter will fund, Kylie, Grant, Jax and Gandy must defeat DRAG soldiers before the planted bombs go off and cover a tropical town in lava!

Animation industry veteran company Willie Castro Animation has been brought on to produce the storyboards and animatic, while Koko Productions, who represent voice talent you’ve heard in countless commercials, features, and cartoons [including megahits like My Little Pony!], will deliver dialogue and sound effects.

Unlike so many other Kickstarters who promise things like t-shirts or keychains, HAPPI vs DRAG offers backers a unique view into it’s production process, through script PDFs, storyboard scans and a link to view the full animatic. But backers can even design their own character that’s guaranteed to appear in the full television series! Maybe you’re not into cartoons much, but you probably know a kid [or cartoon lover] who’d love something like this.

The Kickstarter page, with more thorough information and cast lists, can be found here:

Do you feel this content is inappropriate or infringes upon your rights? Click here to report it, or see our DMCA policy.
AnimalsCartoonFor KidsKickstarterLasersMartial ArtsScience Fiction