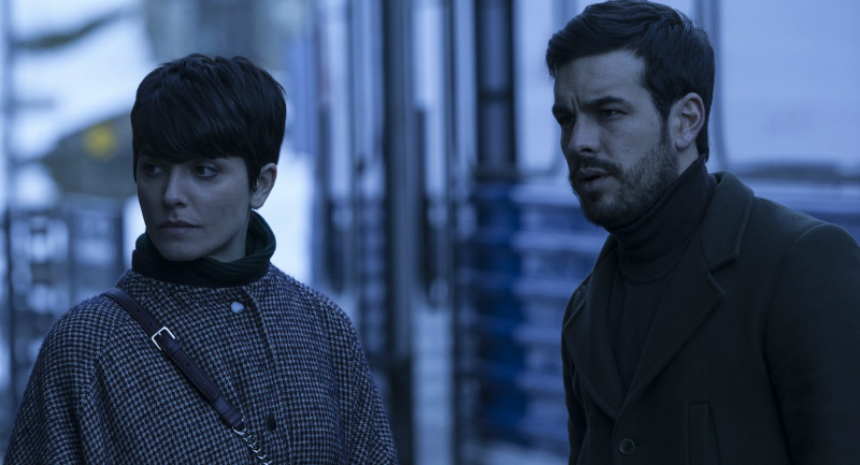 Locked-room mysteries don't get much more fiendish than the one at the heart of The Invisible Guest (Contratiempo), the new film by Spanish writer/director Oriol Paulo (The Body). Even better, that's just the starting point for an increasingly potent thriller.

High-powered businessman Adrián Doria (Mario Casas) stands accused of murdering his lover in the aforementioned locked room. Complicating things still further, he's well known and also married, or at least he was until his wife learned of his arrest and the circumstances surrounding it. She departed from Adrián post-haste, with their young daughter in tow.

He's already been convicted in the court of public opinion, but things are about to get even worse. According to his longtime attorney, a witness to the crime has come forward and will speak to the police (and the prosecuting attorneys) that night. So another lawyer knocks on Adrián's door.

Virginia Goodman (Ana Wagener) is recently retired but, wanting to go out in a blaze of glory, agrees to take on the case to try and make his defense as bulletproof as possible, and to prepare a defense against what an eyewitness might say in court. To begin, Adrián narrates a simplified version of what happened on the fateful night, complete with flashbacks and a dramatic tear or two, which immediately irritates the lawyer. She demands to know what really happened, and insists that Adrián tells her the truth. Otherwise she cannot do the job.

Thus begins a very long night, as Adrián and the attorney talk, pace, argue, and challenge each other in a high-rise apartment. It's a high-stakes cat and mouse battle, peeling away layers of self-justifications and half-truths that Adrián has constructed over a period of months. Adrián, of course, doesn't know the lawyer at all, and is not inclined to open himself easily to her, which raises additional layers of suspicion about what he is claiming to be the truth.

The lawyer pokes holes in the various stories that Adrián tells -- and there are a dizzying number of versions that spin throughout the film, to the point that my head was spinning a bit. It's all told with visual clarity and elegance, even if the narrative points are sometimes hard to swallow. (Again, to a certain extent, that's to be expected, given the circumstances.).

Casas is sufficiently versatile to glide easily from victim to possible victimizer, and he's well matched with Ana Wagener, who is volcanically compelling to watch as the formidable lawyer; she resembles a vulture in that she's always looking for any fresh meat that is exposed in her view.

Casas is also well-matched with Bárbara Lennie as his lover Laura; they have the sort of combustible chemistry that can turn from passion to pain during the course of a simple conversation.

Writer/director Paulo keeps the narrative flowing ever onward at a surging pace. Early on, certain points are so ridiculously made and 'on the button' that they elicit laughter. Rest assured, that's intentional. The Invisible Guest goes beyond locked rooms into the forbidden territory of adult motivations. Why do we do the things that we do?

In this movie, it's all about justice, either avoiding it or seeking it before the closing credits roll.

The film will screen at Fantastic Fest again on Tuesday, September 27.

Do you feel this content is inappropriate or infringes upon your rights? Click here to report it, or see our DMCA policy.
Ana WagenerBarbara LennieMario CasasOriol PauloSpain